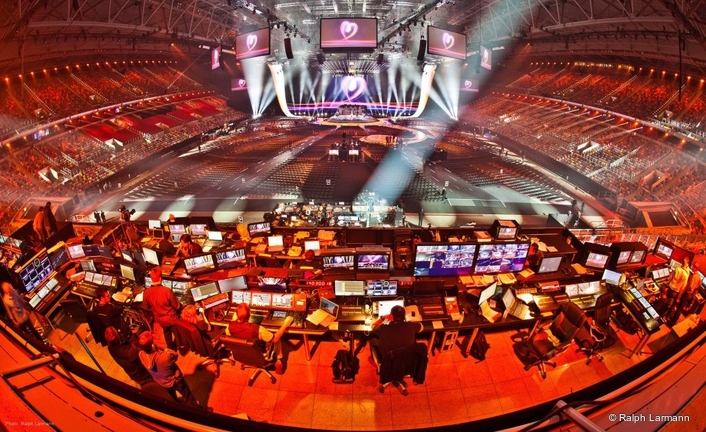 German Lighting Designer Jerry Appelt specified a magnificent arsenal of lighting
The Eurovision Song Contest recently completed its 56th year, held at Düsseldorf Arena, marking the show’s first return to Germany since 1983. The production today is as well known for its technical achievements as for its lavish and sometimes unusual brand of musical performances. Nevertheless, Eurovision still intrigues audiences worldwide.

The Eurovision Song Contest format is fairly straightforward. Member countries of the European Broadcasting Union (EBU) can submit an original song to compete in the annual show. Based on the performance, the public audience of the participating countries phone in votes for their favourite act, as long as it’s not their own country. Combined with the scores of professional national juries, a winner is chosen and that country hosts the contest the next year. Last year, Lena Meyer-Landrut of Germany was crowned winner with her song “Satellite”, putting the contest in Germany for 2011.

This year broke records in many areas including equipment load and audience size. It also tied the record for most participating countries – 43 (tied with Serbia in 2008). The show spanned three live broadcasts – two Semi-finals on May 10th and 12th and the Finals on May 14th. The 2011 Finals in Düsseldorf had one of the largest live viewing audience in Eurovision history with 36,000. This combined with an estimated 120 million television and internet viewers makes it the largest music television program in the world. 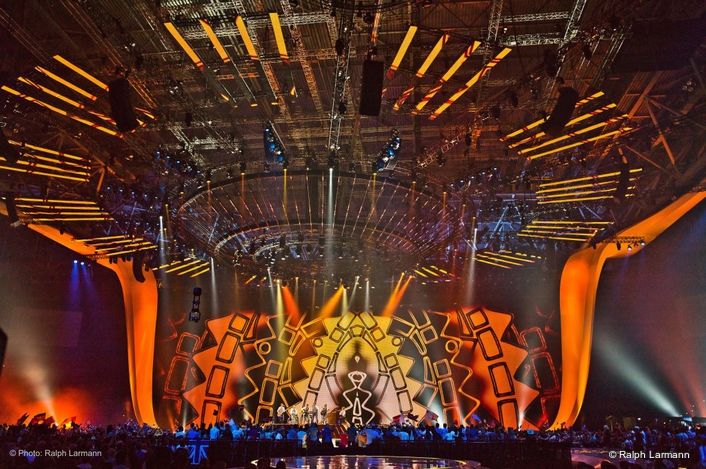 German Lighting Designer Jerry Appelt, known for delivering big looks for music, television and everything in between specified a magnificent arsenal of lighting for the massive Arena in Düsseldorf. More than 2,100 DMX controlled moving lights (5,638 fixtures total) with almost 42,000 parameters allowed 43 countries plus three interval acts and an over-the-top opening performance to have a completely unique look during the 3-hour broadcast.

100% control for all lighting and video came from MA Lighting. 4 x grandMA2 full-size consoles, each with a full backup, as well as 5 x grandMA2 faderwings ran all lighting and video, triggered via timecode. 11 x MA NPU (Network Processing Unit) devices handled all traffic in one session on the MA-Net2. “It’s not even practical to do a show like this without timecode and grandMA2 is the best,” said Appelt, “Absolutely every millisecond is cued and then rehearsed again and again and again. There is no room for an error in a show of this size. The MA system delivered a great result.” 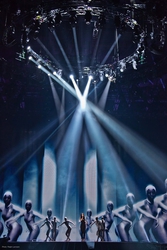 Four operators ran the desks: one for video, one for effect light, one for white light, and one for audience and Green room. Preprogramming began in Hamburg at NDR from March 21st through April 8th, 2011 with the cost free grandMA 3D running on four custom built Cape Cross PCs. The team built moving paths for all moving trusses in grandMA 3D to show the exact positions of the lights in each song. Programming commenced in Düsseldorf April 11th-15th. In total there were 70 patched universes and 2,921 cues.

Approximately 8.5 kilometres of truss were required to suspend the 280 tons of equipment for the show.  The truss structure, approximately 20 metres directly above the stage, consisted of three rings of 10-metres, 16-metres and 30-metres diameter, with a fourth ring over the satellite stage used for hosts and some of the performances. The main stage centre rings held 60 x Clay Paky Alpha series fixtures – a mixture of Alpha Wash 1500, Alpha Beam 1500 and Alpha Profile 1500 fixtures, creating a variety of bright effects to the stage below.

Additional truss stretching the ceiling to the perimeter of the arena held 35 x Alpha Profile 1500 and 42 x Alpha Spot HPE 1500 fixtures. Finally, the top perimeter of the arena was home to an additional 50 x Alpha Spot HPE 1500 fixtures. To match the intensity from above, Appelt placed 24 x Alpha Beam 1500 and 24 x A&O Falcon Xenon 3K flowers on the floor behind the stage and along the sides for a full range of effects. Appelt also specified 24 x Clay Paky Sharpy fixtures for the floor surrounding the front of the stage specifically for Lena’s performance for Germany.

Cape Cross of Cologne, Germany provided all lighting and rigging for the show, sending 130 trailer trucks, each with 40 tons of equipment. Thomas Brügge, Managing Director of Cape Cross said, “grandMA2 is a very popular brand for us. The grandMA2 is a smart console and it’s great that we can totally rely on MA Lighting.”

All video content was operated off 8 x MA VPU (Video Processing Unit) each with full backup. A Barco Encore system was responsible for routing the signals from the OB truck to the LED wall. Video equipment and servers were supplied by Creative Technology. 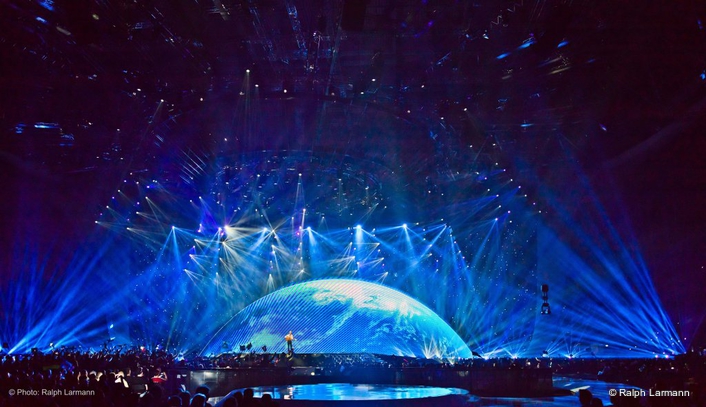 All media equipment was housed next to FOH and operated by Michael Giegerich off a grandMA2 and managed by Stephan Flören (media server technician). The graphics were created by the screen design team from Gravity, Julien Rigal, Falk Rosental and Thomas Neese.

Video content was displayed on a 67-metre wide by 18-metre tall CT Spider 30 N5 LED screen forming the back wall of the stage. 2100 x Barco MiSTRIP 1480mm and 165 x MiSTRIP 375mm plus 2480 x Barco MiTRIX tiles were used for visual detailing around the stage and the movable rings overhead. 12 x R20 projectors were used for the audience screens. Even the satellite stage and Green room got special treatment with 400 metres of Schnick Schnack Systems strips built into surfaces.

Concert and Stage Producer Ola Melzig consulted with the delegations and artists regarding the details of each performance including lighting, video, pyro, sound and camera angles. “Video is one of the trickier elements as sometimes our team doesn’t get specific instructions on how each country wants their look. After the first round of rehearsals there are usually several requests for changes – even Spain completely changed their content the day of the final broadcast. Luckily, we had a very talented crew and some of the best equipment available. In the end, everyone walked away completely satisfied.” 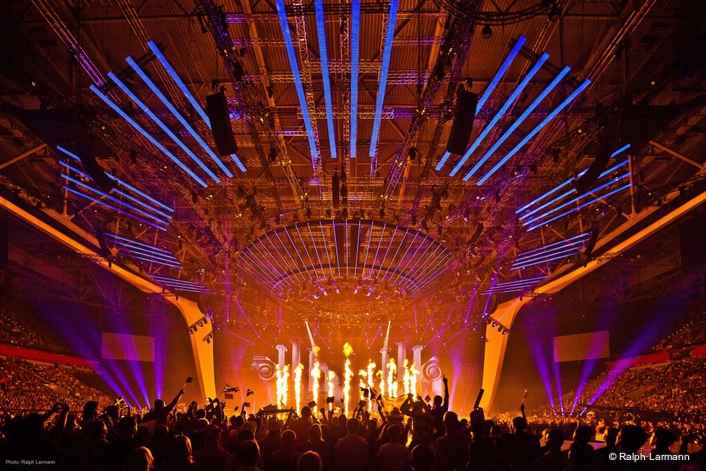 Although Lena, who was defending her title, did not win, Germany still came in at a respectable 10th place. Final results put Azerbaijan as 2011 champion with the song “Running Scared”.