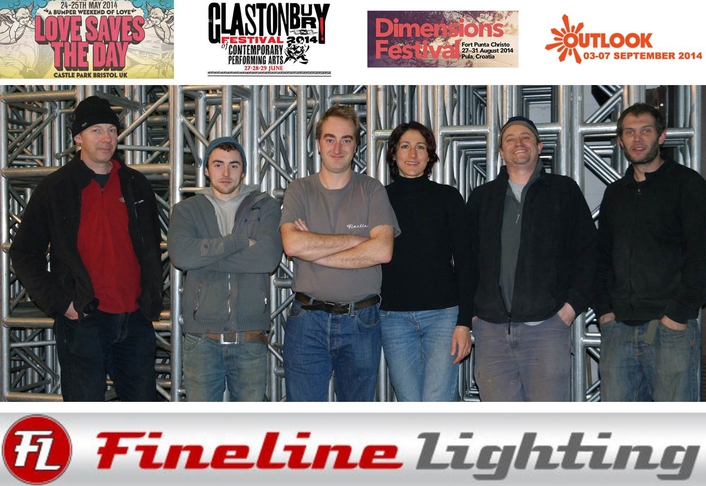 The Fineline Team: Patrick Watson, James Harrington, Rob Sangwell, Sevim Sangwell, Rob Watson and Stuart England
Bristol UK based lighting and visuals rental company Fineline has been confirmed as lighting and rigging provider to four major festivals with more to follow. Fineline’s Rob Sangwell comments, “We are looking forward to a very busy summer and will be keeping all our regular crew on their toes! There’s also a lot more exciting projects in the pipeline which are currently being finalised.”

Love Saves The Day
This innovative Bristol festival returns for the third year to Castle Park in the heart of the city and for the first time Fineline have been contracted to supply lighting, rigging and LED screens for the Main Stage.

Says Rob, “We’re delighted to be working with Team Love (also the inspiration behind Glastonbury’s WOW stage) on this one – they are never short of ideas or imagination – and being a local company we have seen the festival grow, gain popularity and a massive amount of respect which is brilliant!”

Fineline’s Wingnut will be producing a spectacular production design for the Main Stage that will include Robe moving heads, Avolites control, Lighthouse R7 screens and the new AI media server which will be used to run all the video content to the screens.

Glastonbury
Fineline have been involved in supplying lighting and rigging to Glastonbury for at least the last 20 years – “This was already a tradition when I joined 15 years ago!” declares Rob, adding quickly “And … it’s gone by in a flash!”

Once again the Fineline skills and expertise will be assisting in making the Acoustic, Astrolabe, Circus and Cabaret tents magical environments.

In that time the festival has changed massively and the infrastructure to stage complex productions has been developed extensively to ensure that every area can receive the same high standards.

Fineline will be sending approximately 30 crew to the fields of Worthy Farm in Pilton this year. “We love Glasto” says Rob. “It has a completely unique atmosphere and vibe and as a company we are really proud that its part of our heritage!”

Outlook and Dimensions
The Fineline crew return to the beautiful sunny Istrian coast in Croatia at the end of the summer to service these two fast-developing events near picturesque Pula.

Fineline has been involved in both for the last two years, but this year is providing full site wide lighting and rigging for eight stages and around six major environment areas which will include lighting and projecting onto the fabulous Fort Punta Christo.

In a week of EDM heaven, three trucks of kit and 11 crew depart from Bristol to ensure the production values are as high as the ambience, first at Dimensions – a sanctuary for the deep end of electronica, fine techno, house, deep dubstep and drum ‘n bass - followed by Outlook, the biggest bass music and soundsystem culture festival in Europe.