Lena from Germany has won the European Song Contest 2010
NRK, Norway’s public broadcaster, successfully hosted this year’s Eurovision Song Contest, which was held last week in Oslo. EVS’ new XT[2]+ servers and its Full Tapeless Workflows played a key role in bringing this spectacular event to millions of viewers all over Europe.

Being the pinnacle of TV production within the European Broadcasting Union, the Eurovision Song Contest is considered to be the world's largest non-sport television production with more than 120 million viewers from the 39 participating countries. Every year the Eurovision Song Contest is testing the limits of live television broadcast technology.

The Norwegian Broadcasting Corporation, better known as NRK, was the host broadcaster of this year’s Eurovision Song Contest, which was produced in HD with two HD OBVans - one from NRK (HD1) and one from OB-Team (HD2) equipped with 22 cameras. Two new HD XT[2]+ servers and IPDirector software from EVS were used to ingest video files, create playlists and manage the play out of live and recorded content, including the synchronization of simultaneous play outs. To obtain perfect synchronization of the different graphics, an XT[2]+ server provided synched key and fill play out on two channels with GPI trigging several Vizrt real-time graphics. 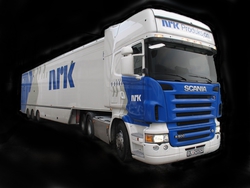 When asked why NRK chose to work with EVS technology, Kim Strømstad, one of the two directors responsible for the production, said: "Reliability is extremely important in a production like the Eurovision Song Contest. There are a lot of elements in this production and many tasks that we could have not achieved without the reliability of the EVS solution. Some parts of the production are quite advanced, but the EVS solution got the job done. The solution is fast, stable and flexible, which makes me, as a director, very satisfied".

Program feeds were streamed live from the XT[2]+ servers to an XStore[2] storage system, for high-end editing on Final Cut Pro in the Apple ProRes 422 codec. However only hours before the first semi-final, NRK decided on an even faster workflow for the reruns, with editing and the manual play out of clips controlled from the LSM.

"The speed of the XT[2]+ workflow was invaluable during this production", said Baard Vidar Pettersen, the person responsible for the setup and operation of all EVS equipment during the event. "By editing the reruns with the LSM, we were able to show the actual performance to the viewers, not an edited version from the rehearsals. The control of the LSM is just unique, and I am very pleased with the performance of the EVS solution".

“The Eurovision Song Contest is a major live television event, which we are proud to be involved in together with NRK. EVS XT[2]+ servers with the IPDirector suite and LSM systems played a key role during the three shows, providing playback of the opening sequence, postcards, reruns, highlights and keying graphics. The reliability, interoperability and instant control of EVS solutions are a must for such a demanding production” says Julien Fraipont, EVS Sales Manager for Scandinavia.

It is worth mentioning that a regenerated TC from the IPDirector playlists was used to trigger the comprehensive lightning equipment in the venue. Play out channels from the XT[2]+ servers were also employed for the play out of clips and loops on the big screen in the venue, as well as reruns in the rooms of the singers, so that they could review their performance during the contest.

EVS Broadcast Equipment is a leader in the design of hardware and software for the production and playout of sport, news and TV programs in both live and near live environments. Its innovative Live Slow Motion system revolutionized live broadcasting, and its instant tapeless technology is now widely used in nonlinear editing and High Definition Television the world over.
The company sells its branded products in more than 70 countries and is capable of providing service in any region. EVS has offices in Belgium, China, Germany, France, Italy, the United Arab Emirates, the United Kingdom, Hong Kong, Spain, and the United States.