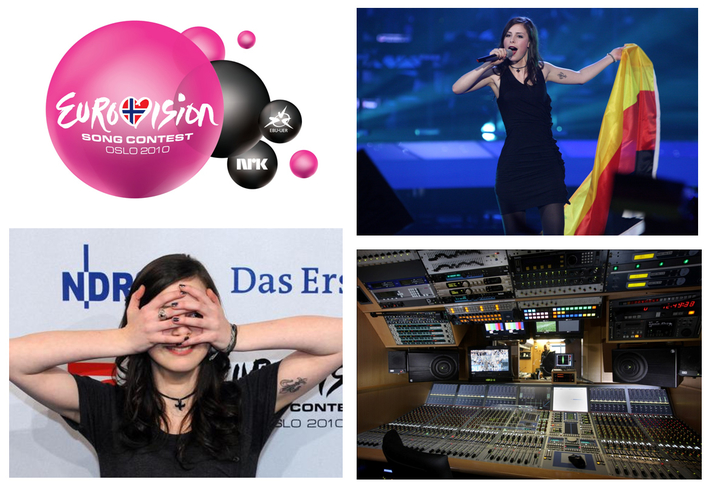 Sound control for the Public Viewing at the Reeperbahn with Ü1 HD from NDR
It was the party of the year: On May 29, NDR and the city of Hamburg invited the public to view the Eurovision Song Contest final on a live screen on the Reeperbahn. The visitors enjoyed a live broadcast from Oslo on a huge screen as well as a stage program with Xavier Naidoo and Nena as the top acts. The broadcast was taken over by NDR using audio technology from the SALZBRENNER STAGETEC MEDIAGROUP.

The sound control room in the HD OB truck of NDR, which is equipped with an AURUS, was responsible for producing the broadcast sound from the stage. The truck transferred its signals to a second sound control room, which was located in a container on site and also had an AURUS mixing desk as well as a corresponding NEXUS network. At this point the threads of the production came together, since this control room was used as a 5.1 monitor and a “main switching room” for the broadcast sound of the OB truck as well as to synchronise the sound feed coming in from Oslo.

The Dolby E® capability of the NEXUS audio network played a significant role since NEXUS handled all Dolby E®-coded signals from Oslo. For this a separate rack, equipped with Dolby E® boards, was integrated into the network via MADI and took care of decoding the Dolby E® signals, but also the off commentary of Peter Urban. During the connection to Oslo, a sound engineer ensured that the image and sound remained synchronous by adjusting delays as needed using direct access to the NEXUS control.

The Eurovision final went on air on May 29 at 8:15 p.m. on German public TV channel “Das Erste” with the “Countdown for Oslo”. At 9 p.m. the live broadcast from the Norwegian capital started, and at 12:15 am the “Grand Prix Party” went off, once again, live from the Reeperbahn. From 9 p.m., the event was also broadcasted live on the radio.