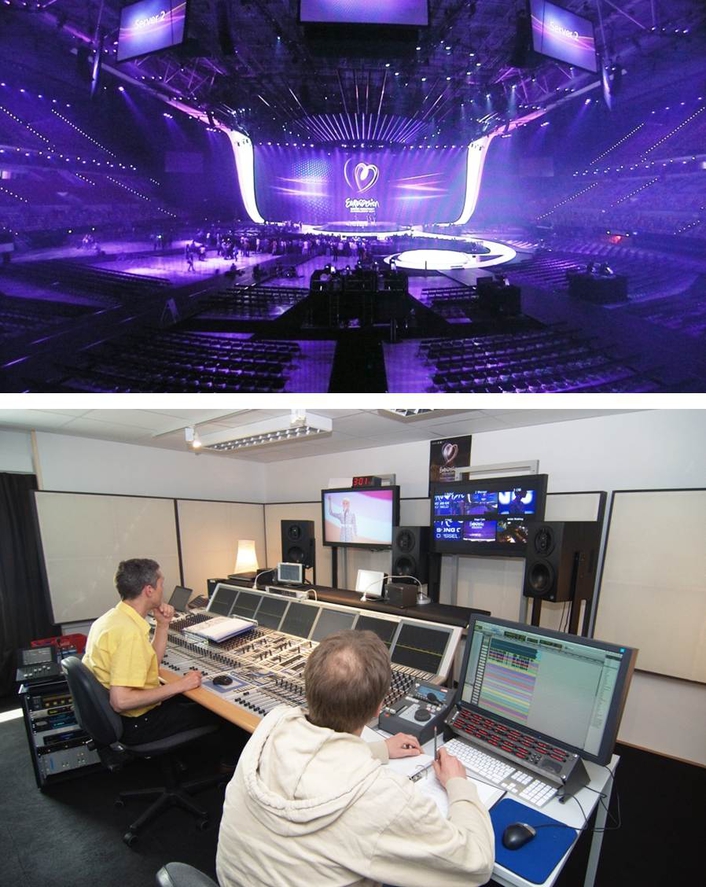 Broadcast sound for the Dusseldorf Grand Prix is produced with AURUS and NEXUS
Just before the final the tension rises at the Eurovision Song Contest.  Will the charming Lena win again for the second time or which other artist will win the competition? The decision is made by around 120 million TV spectators in Europe, receiving their TV sound from a mobile broadcast centre at the Dusseldorf Arena featuring AURUS sound control rooms.

The SALZBRENNER STAGETEC MEDIAGROUP team is keeping their fingers crossed for the finalists while four large scale AURUS consoles guarantee a perfect international sound feed: "As 'Official Supplier' and partner of German public broadcaster NDR, STAGETEC is providing all the mixing consoles used to broadcast this years Grand Prix," says Dr. Klaus-Peter Scholz, one of the MEDIAGROUP’s managing directors. Four AURUS’ with 48 faders and a full complement of DSP are on site. Three are installed in mobile control rooms the NDR has set up on the Esprit Arena campus, the fourth is in one of NDR’s HD outside broadcast trucks. In this set-up two of the four sound control rooms will undertake all mixing of the broadcast sound. The first does the music mix and passes its output to the second which produces the international sound feed. The third and fourth sound control rooms act purely as backups and are therefore equipped with identical hardware and are able to take over seamlessly in case of any failure of the main system.

Each control room has its own NEXUS network to allow it to operate independently of the other NEXUS’. However, the four NEXUS’ also exchange their audio data via MADI to form a single audio network for the entire TV compound. "The whole installation is planned for maximum reliability by NDR in an outstanding manner" comments Dr. Scholz on this set up. Incidentally: as is now normal for international events, the sound feed is produced in 5.1 and stereo simultaneously. This is why the backup consoles feature the same abundant DSP capabilities as the main consoles. The signals from the broadcast centre reach more than 120 million spectators across Europe via more than 40 networks.

And while the grand finale means pure stress for the artists, the MEDIAGROUP team can relax. The combination of AURUS and NEXUS has proven its reliability during many major events such as the Olympic Games in Athens and Beijing, many world championships and also in previous years Eurovision song contests. They all were produced using equipment from the MEDIAGROUP - failure-free and in best quality sound.