ESC 2011: And the Winner is NDR and the whole ESC Technical Team 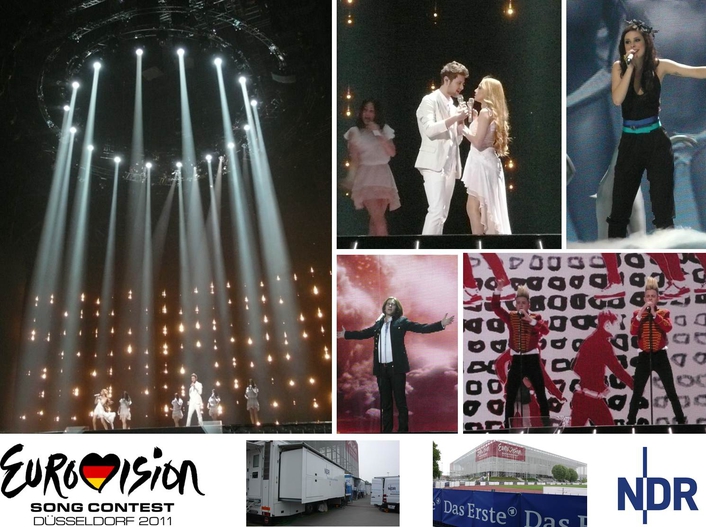 Music is the heart of the show and therefore the artists and their performances was the center point of all the efforts
It was an exciting challenge for the whole Eurovision Song Contest (ESC) team to design, produce and broadcast one of the most spectacular event in 2011. The venue of ESC 2011 in Dusseldorf offered a perfect set up for the biggest music show in the world: 35,000 fans from all over the globe found their place around the center stage in a gigantic football arena which was transferred into a 15,000sqm TV studio.

A LED backdrop of more than 1,250sqm offered every option to create individual designs for each of the 43 entries within seconds using video content or classical lighting, in addition to almost 2,500 moving lights, beams and profiles and the kinetic elements of the stage.

The idea of the design for the show created by Jörg Grabosch (Show Producer), Ladislaus Kiraly (Show Director), Jerry Appelt (Lighting Designer),Florian Wieder (Set Designer), Dieter Thiessen (Head of Engineering), Ulrich Flug (Technical Manager), Ulli Fricke (Head of Sound), Ola Melzig (Stage Producer) and Frank Saelens (EBU Supervisor) was simple: Music is the heart of the show and therefore the artists and their performances was the center point of all the efforts of the team. The moment which makes you feel your heart beat, either as an artist performing on stage or as a fan celebrating one of the biggest parties around the globe, together with millions of viewers infront of their TV sets at home.

A brief overview of the technical concept

Like last year the ESC was produced and broadcast in high definition1080i with 5.1 surround sound and two-channel stereo. The signal was availableall over Europe as well as in Australia and New Zealand.

For the host broadcaster ARD there were two large HD OBVans on location: one from Bayerischer Rundfunk (BR) and one from Norddeutscher Rundfunk (NDR) respectively. The back-up scenario was implemented with these two vehicles. Both HD OBVans have pullout extensions to accommodate the personnel necessary to handle a production of this size. Sony vision mixers, cameras and VTRs were used together with Stagetec Aurus audio consoles for the event. The Hard disk concept was based on an EVS server system. The entire redundantly designed signal distribution backbone for HD Video, 5.1 Audio and Ethernet was based on Riedel’s MediorNet and/or RockNet. The artists performed their act with wireless microphones and in-ear monitiors from Sennheiser, the ambiance was recorded with wired microphones from Schoeps, while a Vizrt HD system was used to generate the graphics for the show. The 1,250sqm LED screen was supplied and installed by Creative Technology (CT) as well as the twelve 10m x 6m screens supported by twelve Barco FLM HD20 projectors. The PA loudspeaker system consisted of flown line-arrays from d&b Audiotechnik – J-Series systems supported with T10 delay lines and flown J-SUBs, as well as J-INFRA subs on the ground. For the FOH (Front ofHouse) music mix and the FOH final mix Yamaha PM5D-RH consoles were in operation. For the control of the nearly 2,500 moving lights and beams the team used grandMA lighting consoles.

Aggreko provided a total of 6 synchronised 1250 kVA generator sets to supply power for the stage, lighting and sound technology. The TV compound was supplied with a further 4 synchronised generator sets, each with500 kVA of power, with uninterrupted network switching to the existing fixed grid.

The entire communication backbone – intercom units for the HD OBVans, the arena, as well as all the radio communications – was implemented via a digital Riedel Artist intercom matrix. 350 handheld transceivers were used in order to ensure an adequate supply of radio equipment. The Artist mainframes were protected via a redundant fibre optic system across the entire area.

A closer look to the 25 active cameras 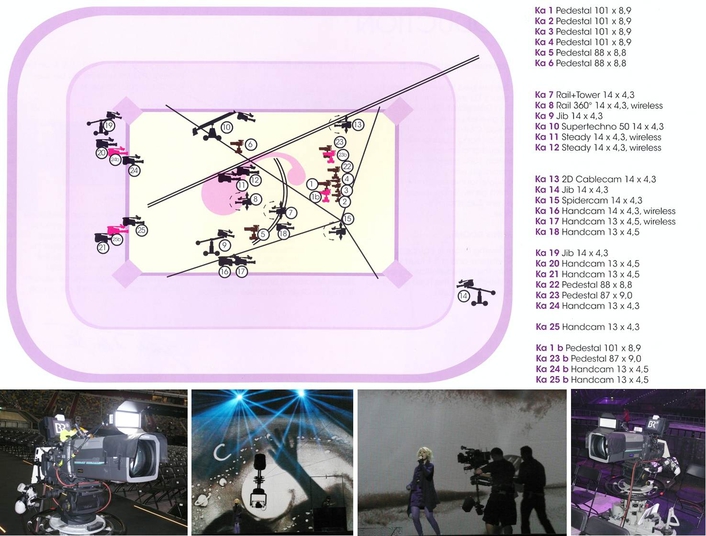 Up to 25 cameras were in operation to cover the artists and their performances on stage, including a hole arsenal of special cameras: a Spidercam, a RopeClimber, two high-speed RailCams (a 360° and a 160°), two Steadicams, two jibs and a SuperTechno crane.