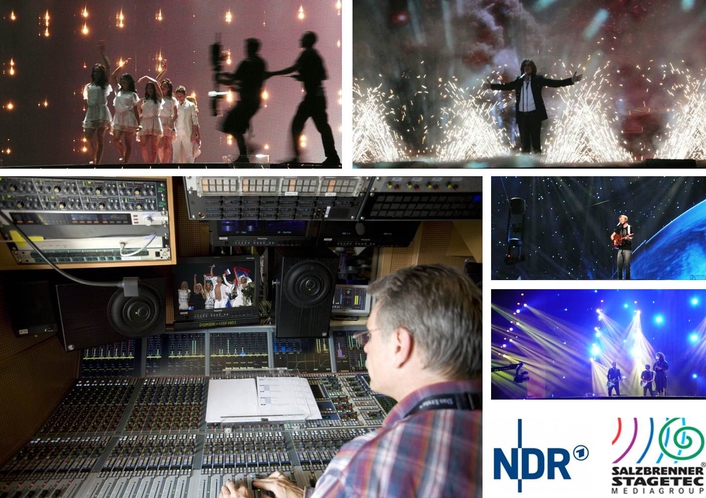 Broadcast sound for the Dusseldorf Grand Prix was produced with AURUS and NEXUS
The tension rose when on Saturday evening at about 23:30 local time Eurovision Song Contest scoring began. The juries and TV viewers favourites varied the voting considerably from country to country. This year the  winner did not emerge until the very end of the show with the sentence, “The winner is Azerbaijan!”

However, there are other winners: Germany as the host-country and German public broadcaster NDR in particular as the technical host of this TV event of gigantic proportions. NDR produced the national and international sound feeds in the mobile broadcast centre at the Dusseldorf Arena featuring AURUS sound control rooms.

“As 'Official Supplier' and partner of German public broadcaster NDR, STAGETEC provided all the mixing consoles used to broadcast this years Grand Prix,” says Dr. Klaus-Peter Scholz, one of the MEDIAGROUP’s managing directors. Four AURUS’, each with 48 faders and a full complement of DSP were on site. Three were installed in mobile control rooms the NDR had set up on the Arena campus, the fourth was in one of NDR’s HD outside broadcast trucks. In this set-up two of the four sound control rooms undertook all the broadcast sound mixing. The first did the music mix and passed its output to the second which produced the international sound feed. The third and fourth sound control rooms acted purely as backups and were therefore equipped with identical hardware and were able to take over seamlessly in case of any failure of the main system.

Each control room had its own NEXUS network with extensive fibre-optic cabling to allow it to operate independently of the other NEXUS’. The four NEXUS’ also exchanged their audio data via MADI to form a single audio network for the entire TV compound. “The whole installation was planned for maximum reliability by NDR in an outstanding manner” comments Dr. Scholz on this set up. Incidentally, as is now the norm for international events, the sound feed was produced in both 5.1 and stereo simultaneously. This was why the backup consoles featured the same abundant DSP capabilities as the main consoles. The signals from the broadcast centre reached more than 120 million viewers across Europe via more than 40 networks.

And while the grand finale was stressful for the artists, the MEDIAGROUP team relaxed and enjoyed the many performances. The combination of AURUS and NEXUS has proven its reliability during many major events such as the Olympic Games in Athens and Beijing, many world championships and also in previous Eurovision Song Contests. They were all produced using equipment from the MEDIAGROUP – failure-free and in best quality sound. And in Baku, the pulsing and modern capital of Azerbaijan which will probably be the host of the ESC 2012, STAGETEC technology has already proven itself for years, with a digital audio network in the Academic National Dramatic Theatre in Baku.

ESC 2011: And the Winner is NDR and the whole ESC Technical Team
NDR Appoints Presteigne Charter for their Broadcast Equipment Needs at ESC 2011
NDR Ü1 HD