Elation Sniper Makes the Grade on RTL’s “Back to School”

One of Germany’s pre-eminent hosts, Thomas Gottschalk, takes celebrities back to their school days in the second season of "Back to School,” RTL Network’s popular quiz game show, and Elation Professional’s award-winning Sniper is along for the nostalgia, providing flexible and unique special effect lighting looks.

Lighting designer Thomas Gerdon of gerdon MEDIADESIGN has mounted 24 Snipers along with LED wash lights on movable truss towers so they can be moved back and forth between the set’s two stages for special musical performances. “There are two musical performances per show and because the show towers are on wheels we can easily move them and use the Sniper effects on both stages,” explains Thomas, who is lighting the show for the first time. “We have them located at new positions each time so it gives us great flexibility. Coupled with the different effects you can get out of the Snipers, it really makes for a lot of options.”

Thomas likes to use the Snipers to create beam looks coming from the back of the stage with the Snipers focused right on the camera. “It has a very strong, solid beam look,” he says. “Plus you can use it as a flower effect or laser simulator, which gives even more possibilities. I use a break-up flower effect for slow songs and the laser effect with fast movement for the faster songs. I really enjoy having the opportunity to work with a new type of fixture. It is very unique.”

The Sniper, a hybrid beam, scanner and laser simulator in one, is striking a chord with lighting designers who seek a creative new tool to work with. It won a PLASA Award for Innovation last October and is finding service on a growing number of television shows, concerts and special events, as well as club environments. Powered by the new 132W Philips MSD Platinum 2R lamp with a 6,000 hour average lifetime, the Sniper delivers an intense 45,010 lux @ 16.4’ (5m) and gives designers 14 dichroic colors and 17 static gobos to choose from. 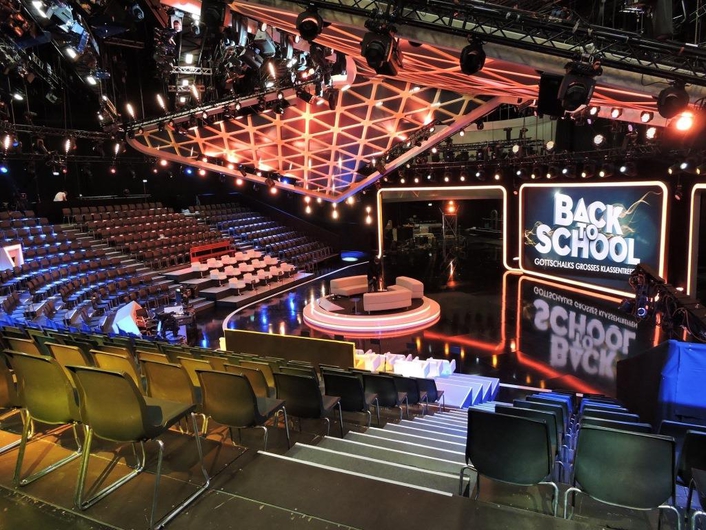 Produced by Constantin Entertainment, “Back to School” challenges celebrities and their old classmates with quizzes and action rounds on a set that reflects the spirit of their educational youth. This season’s first episode aired on December 21sth with more episodes broadcast in February and March.