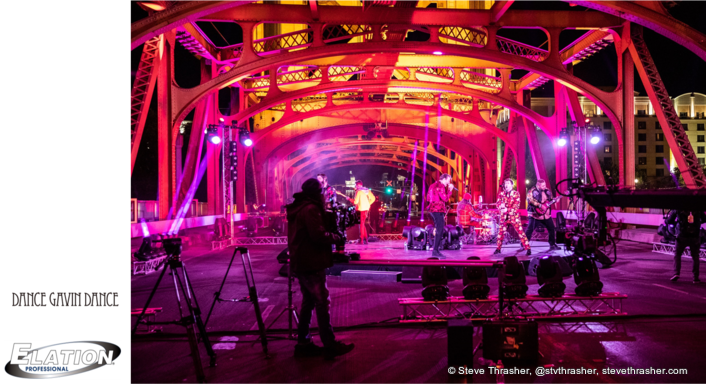 Formed in 2005, Dance Gavin Dance hail from Sacramento and are local favorites. Last February, the band had just started a tour to promote a new album release when the shutdown hit. Tour manager Travis Wade and Dion Cook of SPL, both of whom have worked with Dance Gavin Dance the last few years, decided to see if there was a market for pay-per-view streaming of the band, a project that culminated in a successful July PPV concert from a recording studio set up in a converted space in SPL’s warehouse. When the band decided to do a second PPV concert last fall, Travis and band LD Justin Wade, called on Dion and SPL to help make it happen. Soon thereafter, the three began hashing out a design. Travis, a co-producer of the event together with Derek Brewer, came up with the stage concept while Justin handled lighting design and programming. 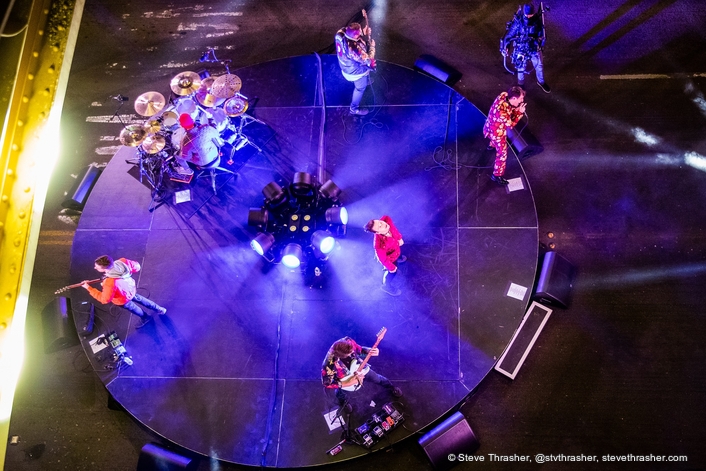 “The show needed to be an elevation to anything the band had previously done and we treated it as such,” comments Justin, who began working with the band on their Artificial Selection tour a few years ago. “This show was shot in the round, with each band member facing other directions, similar to the cover of the Tree City Sessions 2 album. With that in mind, the goal was to create a similar atmosphere around the band, where lights would work almost as audience members, encapsulating the stage, while complementing the bridge and adding additional tonal focus to the bridge’s architecture.”

Justin says that shape and geometry was a big part of the show and that the geometric shape of the rig proved very important. “I had created an initial Capture drawing and basic rig, then when I got with Dion at SPL we really started refining things, adding a series of additional truss lining further down the bridge to really hit the architecture around as well. We have a phenomenal relationship with Sacramento Production & Lighting and they have always treated us as family in the Sacramento area.”

Extra requirements
Forming the scenic backdrop and surrounding the band for the shoot was Tower Bridge, a historic truss bridge in Sacramento that is among the most beautiful vertical lift bridges in the United States. “When I was told the location would be the iconic Tower Bridge the first thing I did was to get a set of the 1934 blueprints in order to make a 3D CAD drawing in Vectorworks,” Dion of SPL states. “From there we collaborated on the design, taking into consideration extra requirements such as dealing with a major roadway closure and the police departments of two cities, working with the Coast Guard as the event took place on an active waterway, and creating a design that could be clear of the bridge breaks so that the bridge could open if needed. Of course, we also had to be COVID-19 compliant.” 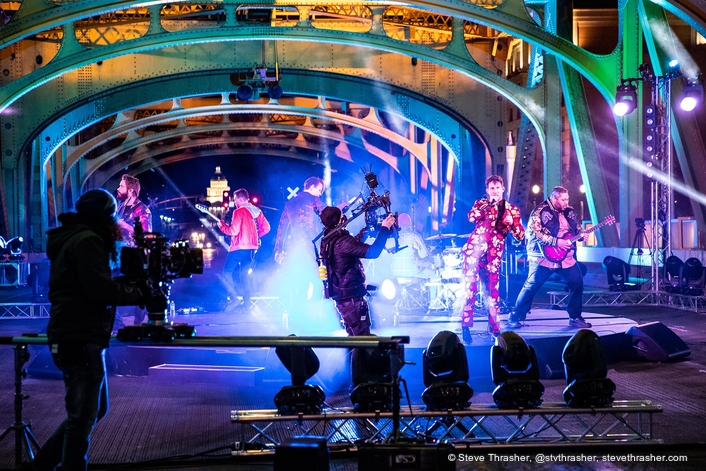 In the event that the Coast Guard had to open the bridge, Dion and his crew would have had to move quickly to break the connections at the gaps so the lights and stage could rise up with the center section of the bridge. “Thankfully, that was not necessary and all went as planned with no hiccups,” Dion said. “The weather was good that night as well and everything fell into place.” 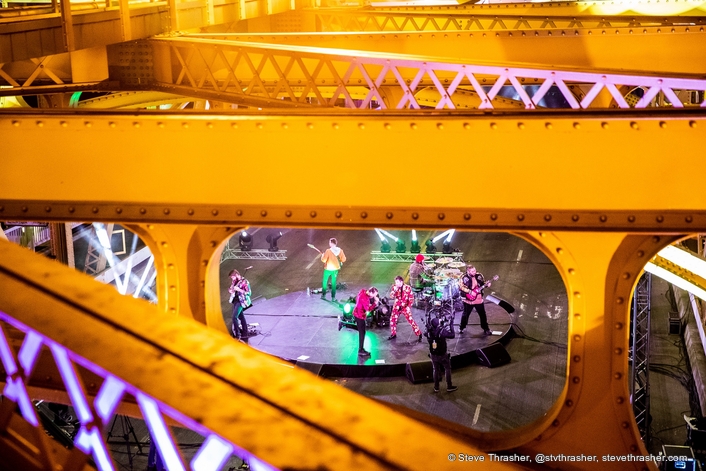 Elation rig
With the host of extra issues to contend with, Dion was glad the choice of lighting fixtures was a more straightforward task. “We chose the Elation gear because of the LD’s familiarity with the lights but also because I knew that the fixtures chosen would cover the structure and give Justin a saturated look for the bridge, all while keeping the band the primary focus.”

Surrounding the circular stage was a ground-based square of 20 Platinum 5R Extreme™ beam moving heads and 16 Platinum FLX™ hybrid moving heads. Justin explains: “These were meant to work around the band, never at the band, using geometry in the position of the beams to complement the bridge but surround the band, directing focus inwards towards the stage itself. The positions were meant to reflect that, almost reminiscent of string art and geometric shapes.” Needing something bright that wouldn't get lost under the city's ambient light for powerful beams all the way down the bridge or into the sky, the 5Rs and FLX's fulfilled the task. “The FLX's were great at showing a nice gobo breakup in the beam and bright enough to add some really cool shape effects to the ceiling and architecture of the bridge as well,” Justin adds.

Another key piece of the show, he says, was a circle of Fuze Wash Z350™ single source par moving heads in the center of the stage used as a dynamic backlight around the band. “Having taken these lights on the Artificial Selection tour as well, I knew they had great zoom attributes and would give a nice punch whether it be narrowed in or washed out. They move quickly and smoothly enough to get in and out of movements and into a clean look very seamlessly.” 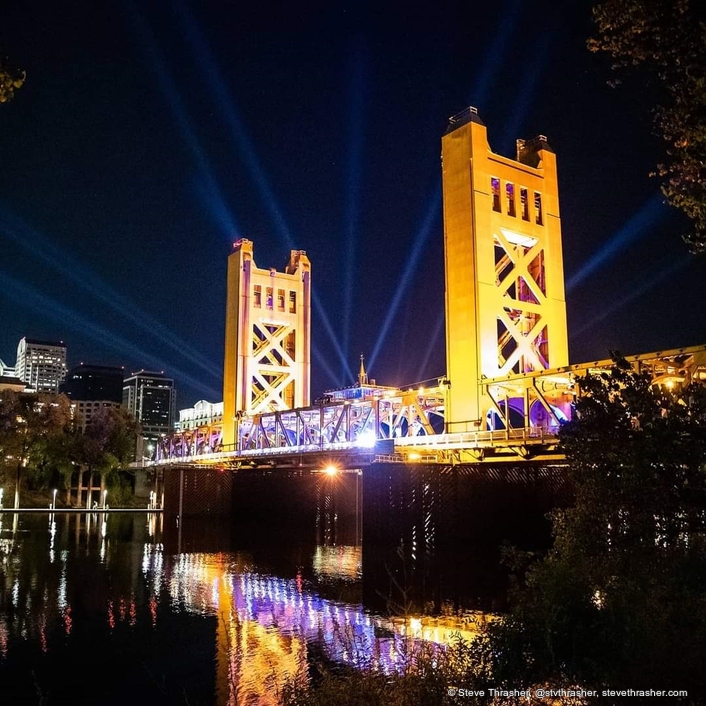 Additionally, a series of Colour Chorus 48™ battens, Platinum 1200 Wash™ moving heads and additional Fuze 350s and FLX's were used to light the architecture going up and down the bridge. “Brightness and clear defined colors were key as these were needed to really accentuate the architecture of the bridge,” Justin continues. “As mentioned before, this bridge was in the middle of a city with surrounding ambient light, so we needed fixtures bright enough and powerful enough to light the entire bridge and not get washed out through the ambiance of the city. There were a number of drone shots as well, so being able to capture the entire area of the bridge and make the environment all feel as one cohesive show was very important.” Filling out the rig were 13 Cuepix Blinder WW2™/WW4™, 8 SixPar 100” Par lights, and 4 Design LED Strips™. Dion adds, “We chose Global Truss for its size and speed of assembly and it meshed well with the bridge architecture.” 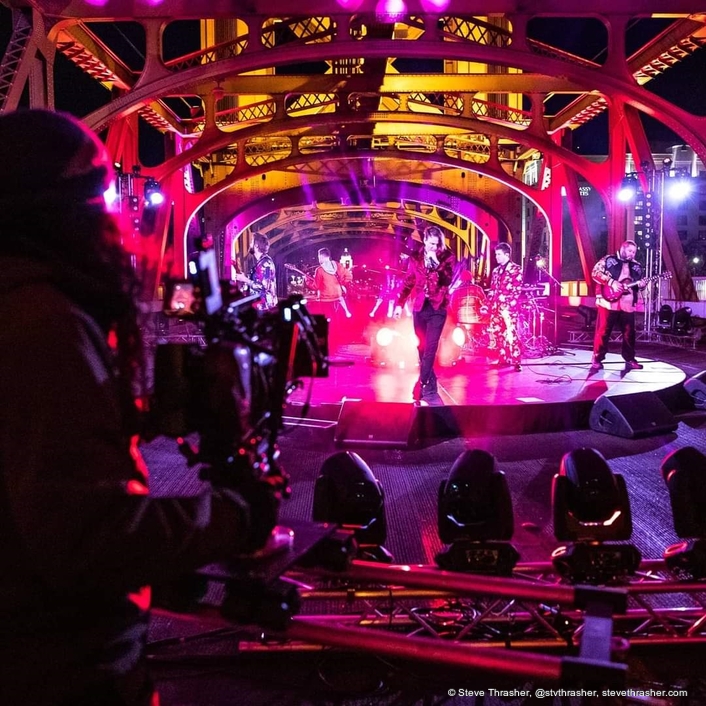 A whole new level
Twelve cameras plus a drone were used to shoot the show with shoot day running on a very tight schedule – in at noon, shoot at 5pm, and out by 11pm with no exceptions. Justin comments, “We only had one shot to get everything up and running in a very limited time frame, and I knew that these Elation fixtures would prove reliable, not causing any major issues day of show. Choosing Elation ensured that we would have the elevated show that we needed to bring this dynamic band to a whole new level.”

Reflecting on the day, Dion says that the SPL crew did a fantastic job and he was glad to put 26 stagehands to work if just for a day. He also expresses his appreciation for the partnership he and Elation enjoy. “Elation gear and staff have always stood by us, supported us and have been a great partner. From our first national tour over 11 years ago and thru this shut down, I want to give a big thanks to Raul Fonseca of Reef Sales, Eric Loader, John Lopez and Gines Gines of Elation. Without their support we would not be here today.”

Justin was grateful to work on such a unique project, unsure of when he'll be able to work a show again. He concludes, “It was wonderful to bring something like this to the band’s dedicated fans and I cannot wait to bring back their live show to a glorious crowd and see all of the excited faces in person again.”