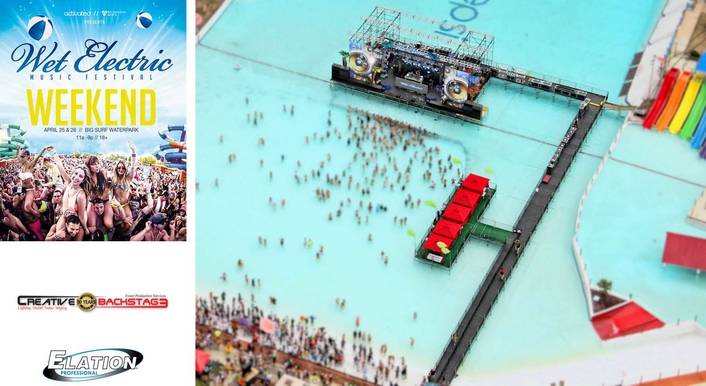 .
Water and electrics usually don’t mix unless you were at Wet Electric in Tempe, Arizona, in April for America’s largest waterpark music festival where Creative BackStage of Phoenix lived up to its name by creating an extraordinary stage visually brought to life using Elation Platinum Beam 5Rs and Opti Tri PAR lights with Elation EVLED LED video panels used for a high-impact backdrop LED video screen.

On April 25th and 26th, Wet Electric took over Big Surf Waterpark with headliners Tiesto and Dillon Francis providing the party beats for the biggest pool party in the country. What separates Wet Electric from other electronic music festivals is a professional production stage built into the U.S.’s largest wave pool with a dance floor the pool itself. 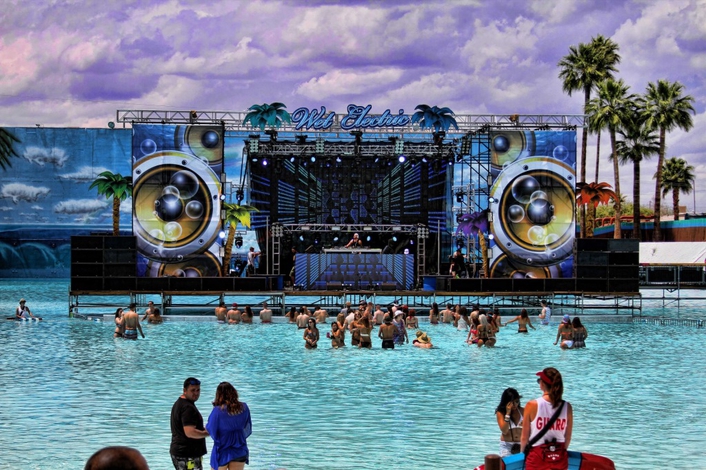 Designing a full production stage amid a wet pool environment, the mix of water and power cabling posing their own challenges, matters were made only worse by an untimely storm, but Creative Backstage was up to the task. “From design challenges to acquiring permits and battling the wind and rain, it was a major undertaking just to make this happen,” stated Creative Backstage owner John Garberson, who handled lighting design and has been a part of Wet Electrics since the first event in 2012. “It was an uphill challenge with some people saying it was too dangerous, too hard to build, too much liability, or would cost too much,” he says. “But that didn’t hold us back from exploring something that has never been done in Tempe before.”

Creative Backstage designed the stage and runways, designed and supplied the lighting and video, and supplied the special effects for this year’s event. John had to think about what mix of lighting would be most effective for an event that ran throughout the day and into the night. “Because 90% of the event occurred during daytime we relied more on LED screens, blinders, special effects and LED lights than moving lights,” he states. “But at the same time we had to meet the rider requirements for the night time part of the event. It was a balancing act.”

That balancing act included Elation’s well-established Platinum Beam 5R beam lights, which were placed around the stage and used mostly after sunset, along with compact Opti Tri PAR RGB lights used to wash the stage and light the go-go dancers. 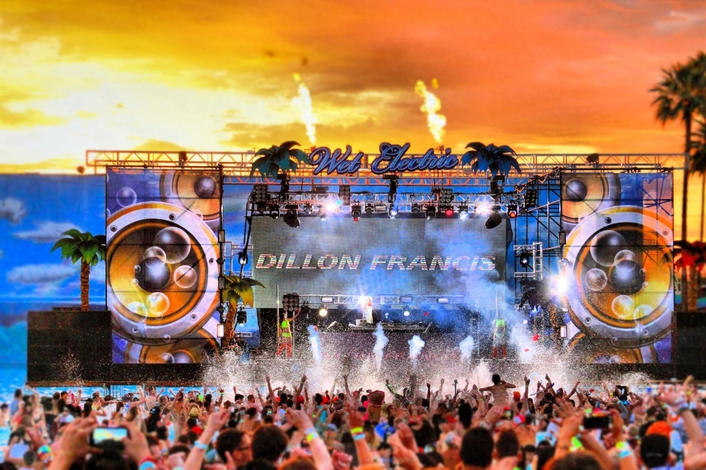 Used as a main video backdrop and flown on electric motors in back of the DJ was a 29’ wide x 10.4’ high Elation EVLED 1024SMD 20mm LED video screen. “There are a few reasons why we stick with the Elation 20mm panels and the first is that the screen is a great design for outdoor environments where weather can become an issue,” John says, who stated that they used their weather action plan over seven times due to the winds and rain. “With the 35% blow through and lightweight design it handles small winds well. We used a backdrop system during the day to make the screen pop due to the sun and when the winds got bad we just released the backdrop. If the wind continued to get worse, we just lowered the screen down. The LED panels’ IP65 rating is great because we could still run the screen in rain while all the lighting had to be covered up.”

This year’s Wet Electric was a unique project from the beginning with a number of hurdles to get over but in the end the two-day festival was a splashing success and the weather didn’t dampen the party. John thanks Chris Brodman, James Simpson, Jamie Rivera, Maxine Kichler, Matthew Berg, TJ Watson, Tom Adikes and the rest of the Creative BackStage crew for a job well done.