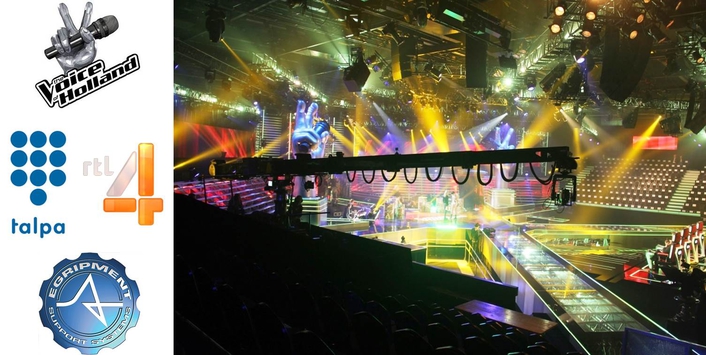 Airing on RTL4, TVOH is the Dutch adaptation of the popular American television singing competition. The show, which has been hosted by Martijn Krabbé and Wendy van Dijk since its first season in 2010, is centered around four coaches, who are popular performing artists in their own right, going head-to-head to select  competitors as they audition, to ultimately create their own teams to compete against one another. During these auditions, the coaches cannot see, but only hear, each performer singing. After the judges put together their ideal teams, the coaches train the vocalists in their group, even occasionally performing with them, with the ultimate goal of having one artist crowned the winner, or, ‘The Voice.’ 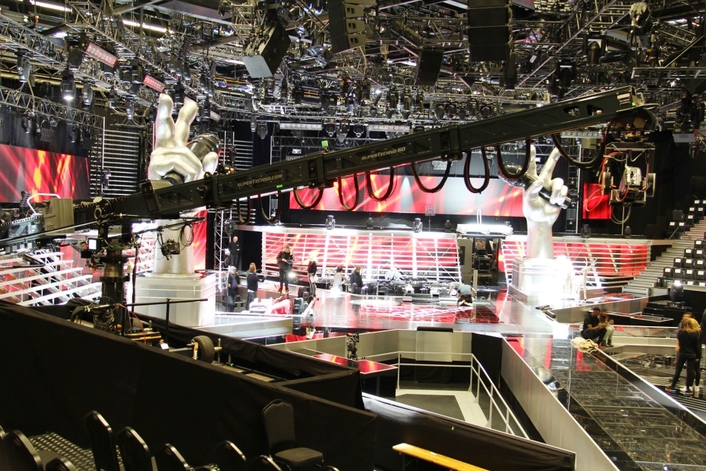 In late summer 2014, Talpa Productions, long-known for its cutting-edge, technical solutions, approached Egripment about the possibility of using its 15 meter long Telescopic Camera Crane for VR/AR. After extensive technical and software research in collaboration with its software partner Trackmen, Egripment decided to take on the challenge.

In order to correct the natural bending of the crane’s arm caused by gravity, the crane was fitted with custom-designed brackets for use with high-quality precision encoders. These were fitted on all camera movement axes, including pan, tilt and the telescopic movement of the crane and remote head. The greatest challenge the companies faced was creating a way to adjust the crane deflection, which was solved with a special algorithm within the software.

Egripment delivered a "full service" package comprised of the Telescopic Camera Crane, Generic Track rail system, technicians, crane operators, and data for and calibration of the equipment and studio mapping. 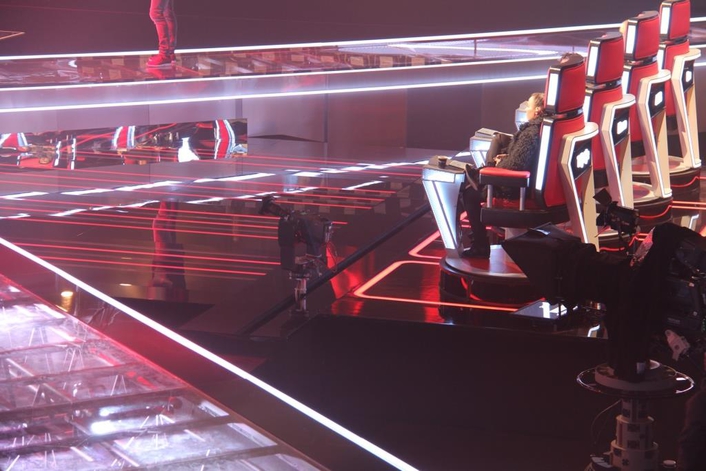 “The beautiful graphic designs, produced by Prographics Netherlands and shot in conjunction with the high-quality equipment delivered by Egripment, provided viewers with an exceptional experience that has never been seen on television,” says Richard Villhaber, Vice President and Sales Director for Egripment. “Director Sander Vahle’s creative input was amazing. It was a wonderful experience for us to work together with Trackmen, Prographics and DutchView to achieve such incredible results.”

ABOUT EGRIPMENT
Founded in 1976, Egripment has a long reputation of manufacturing a wide range of camera support and remote broadcast solutions, for sale or rental, to TV productions, concerts and sporting events across the globe. With a product line that includes cranes, remote heads, dollies and tracking systems for cinema, modern-size/small cameras and ENG/broadcast cameras, Egripment is the only manufacturer that can offer adequate supply and service for events requiring large quantities of special camera support equipment