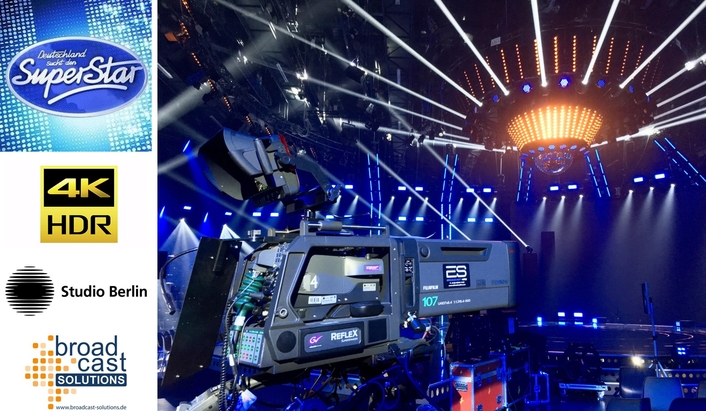 As a first timer in Europe UFA Show & Factual with the final of “DSDS - Deutschland sucht den Superstar” (a German reality talent show and part of the “Idol” franchise) produced and broadcast a live show in UHD/HDR. The final took place on 5 May 2018 and was produced at MMC Film + Studios Cologne and broadcast in parallel in HD/SDR for the program of RTL Germany and UHD/HDR for the UHD-channel of RTL Germany.

Commissioned by UFA GmbH, the new OB9 truck of production service provider Studio Berlin was the linchpin in the realisation of the UHD/HDR-signal. The OB truck, designed and built by Broadcast Solutions GmbH, was explicitly commissioned by Studio Berlin at the beginning of 2017 to work in such elaborate productions – to implement UHD- and HDR-productions flexibly and with ease. For the production of the DSDS-final OB9 was stationed in the MMC Studios in Cologne and produced the UHD/HDR signal on-site. 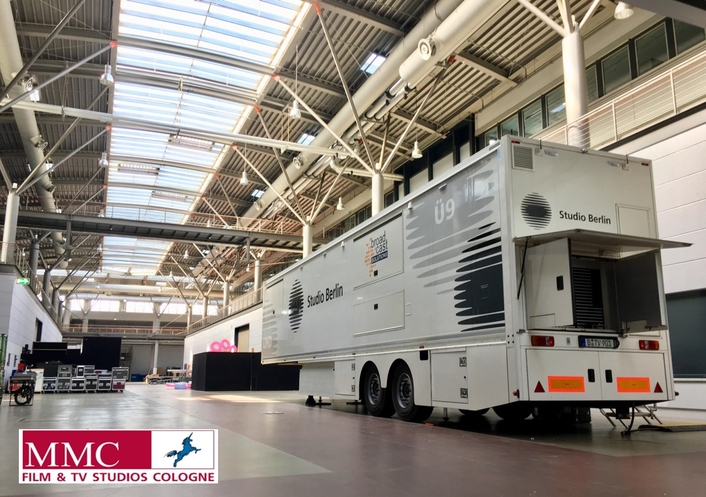 Ernst Feiler, Director Technology of UFA GmbH, commenting on the production: “First of all, we would like to thank all the many innovative and competent colleagues in front of and behind the camera. Without them, this unique event would not have been possible! Thanks to their commitment a big Saturday evening show was broadcast live in UHD/HDR for the first time in TV-history. Especially the big shows, using elaborate light and stage productions, show the enormous visual and emotional potential of the new UHD/HDR-standard. Without Studio Berlin’s year’s long experience in producing live TV-shows and their knowledge of UHD, this premiere would not have been possible.” 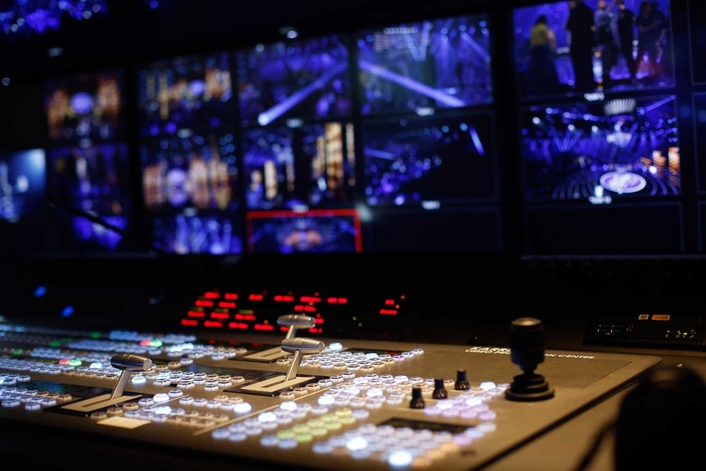 Nick Zimmermann, Managing Director of Studio Berlin GmbH, adds: “We faced a big challenge with the live production of the DSDS-final in UHD/HDR. However, by investing in our new OB truck OB9, we were technically well prepared for the job, and the OB put us in a position to successfully implement such an innovative workflow. Studio Berlin’s competence in realising big entertainment shows was another factor contributing to this successful European premiere. The support from all hardware manufacturers during planning and implementation was outstanding." 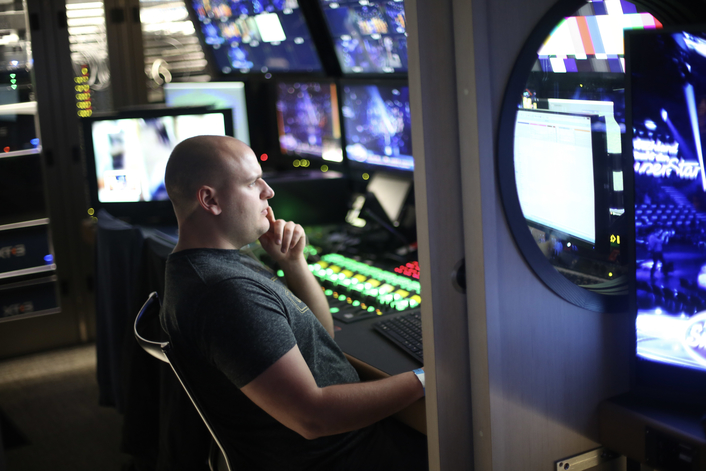 On the technology of the UHD/HDR production

Matthias Alexandru, Technical Director Studio Berlin, on the technical aspect of the production: “The task was to produce the HD-signal in its existing workflow without changes during live transmission. Therefore the UHD/HDR-signal had to be generated independently. To achieve this, we decided to completely separate the productions of the HD and UHD/HDR signals.”

The control of the LDX 86N took place both in the fixed control room for the HD-signal and in the OBs control room for the UHD/HDR-signal. The camera’s feature-set allowed for an independent change of parameters of the respective format. A Grass Valley expert team was on-site during setup and production, contributing to the production’s success.

The show signals, available exclusively in HD (including VTR-feeds) were produced in the fixed control room of the MMC Studios and handed over to the Studio Berlin OB9. Here, these HD-signals were converted to UHD using Grass Valley Densité IPG 3901 modules. The UHD/HDR broadcast signal was then broadcast live via Nevion Equipment to the CBC Cologne Broadcasting Center. 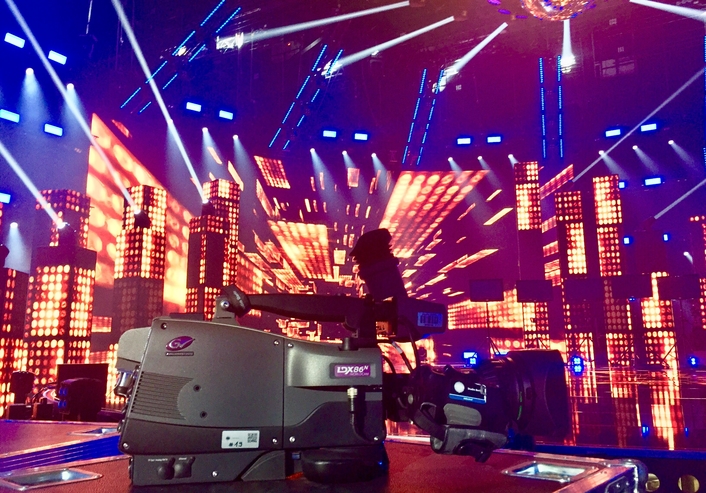 The Grass Valley Karrera mixer used in the OB truck was controlled remotely via the studio's fixed control room. Manual interference only occurred in particular scenes of the show, such as the use of digital video effects. The audio signal editing was also handled in the studio control room.

During production, Studio Berlin in the OB truck relied on Sony BVM-X 300 monitors. Using the live satellite signal’ return feed the teams in the OB truck checked UHD quality with LG and Samsung UHD-screens. Therefore it was already possible during production to determine how the panels of different manufacturers would behave at the viewers’ home. Over the whole planning and production period, Michael Mücher and his team from BET supported the crew with their know-how.

The OB9 truck was developed by Broadcast Solutions based on the Streamline concept and is designed as an S16. Inherent features of Streamline OB trucks are field-proven room and design concepts, combined with the use of the latest 4K/UHD, HDR and IP-workflow technologies. The OB9 can work in both HD/SDR and UHD/HDR formats. The Ü9 OB truck is one of the first Streamline models in which Broadcast Solutions has incorporated Riedel's MediorNet solution for video processing, operating as a distributed signal routing and communication backbone with MetroN core routers and MicroN Standard + multiviewer systems. 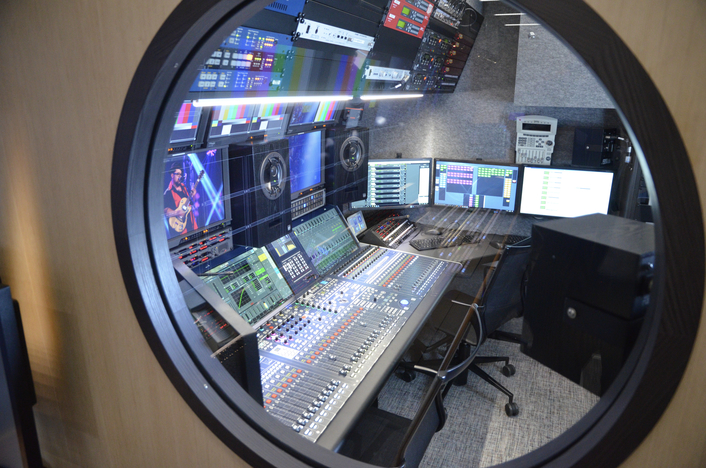 Broadcast Solutions GmbH is one of Europe’s biggest system integrators. Started in Germany 15 years ago, the company stands for innovation and engineering „Made in Germany“. With subsidiaries in Europe, Asia and the Middle East Broadcast Solutions plans, implements and realises projects in the areas of Outside Broadcast, Satellite Communication, Studio and MCR Broadcast Facilities, Sports Arena Multimedia Solutions as well as mobile Security and Surveillance Solutions. A further emphasis of the company is to consult our customers when it comes to workflow optimization, training and production consultancy. Acting as a distribution company Broadcast Solutions offers sale and rental of exclusive and innovative products in defined areas or as worldwide distributor. With more than 100 employees worldwide and working as a hardware independent system integrator Broadcast Solutions offers its customers tailor-made solutions – from idea to implementation and beyond.