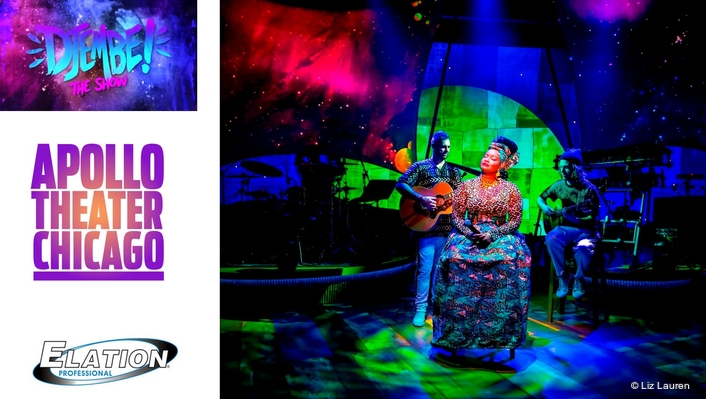 Djembe! The Show is an energy-filled, theatrical concert experience that mixes traditional West African beats with modern takes on contemporary music that has toured Europe and even been featured on Ted Talks and Oprah’s Super Soul Sessions. It made its limited U.S. debut at the Apollo Theater in Chicago with lighting design by Zach Blane (@zachblane), who used an all Elation LED lighting rig to accentuate the unique production. Support was provided by Elation dealer ILC.

Djembe!, which opened April 10th and ran through May 12th, is a celebration of African culture with drumming and musical performances by a cast composed mostly of West African musicians.  Wonderfully interactive, guests of the show were handed a drum – a djembe – and invited to play along.

The Apollo Theater features a three-quarter thrust stage with the audience on three sides, a setup that gives guests an intimate experience. According to LD Zach Blane, it also gave lighting a large role in Djembe. “Separate of supporting all of the beats of the piece tonally, the basic lighting need to have everyone be seen requires more lighting than a traditional end stage set up,” he said. “There are three points of vision at all times and it required three times the amount of lighting to render the piece, as designed.” 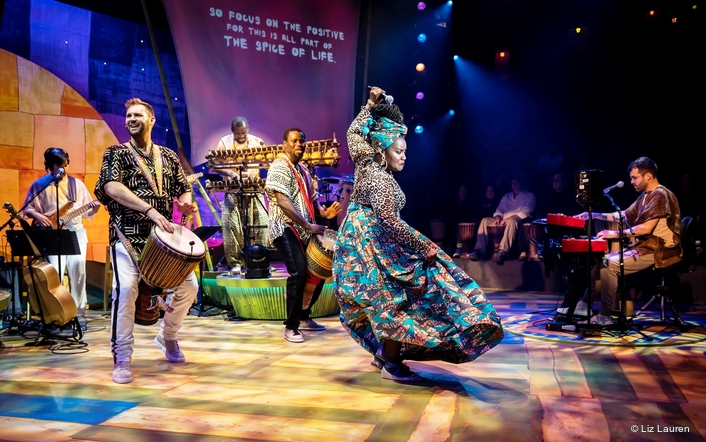 Used to reinforce the energy and emotion of the show was an all LED Elation lighting rig of ellipsoidals, moving heads, Pars and battens with the mid-air projection canopy coming from

Antari F-4 Fazers. Blane says that haze, and the “air lighting” it makes possible, played a very important role in the piece. “Because the audience wraps the stage, everyone has a different experience of the show depending on where they are sitting,” the designer explains. “That is a tall order for a lighting designer to keep everyone equally engaged, and feeling included, all while the other groups of people, across the theatre, still feel taken care of. The haze allowed me to light the air as a pseudo projection surface to give the audience interest wherever they were seated and helped calibrate the “energy” of the room during production numbers to evoke audience participation and joy. The Elation ACL 360i and Platinum fixtures did a lot of heavy lifting in this regard. There were also many hanging fixtures, encased in hemp baskets, like ones you would find in a small village in West Africa, throughout the space, that hung over the audience, with full LED/pixel map control that aided in the ‘air visual’ to keep it all one cohesive image. I wanted the audience to feel like our ‘world of Djembe’ was wrapping them in a hug, or like we were somehow suspended, in the trees, in this whimsical place, all together.”

Placed strategically throughout the space were 15 Artiste DaVinci™ LED moving heads, which operated as concert lights as well as face light for the three sections of audience. Over the stage were 6 Fuze Wash Z350™ single source Par moving heads outfitted with snoot attachments. “These gave great bright color punching backlight for the band and performers,” Blane says.

LED ellipsoidal spots, which the designer says he used for filling in shadows and giving a soft texture throughout the stage and the air. “I really enjoyed the lime diode on the Colour 5 fixtures. They helped a lot with brightness.” Used to light a backdrop from above were 6 SixPar 300™ Par lights while 6 Seven Batten 72™ battens lit the backdrop from below. 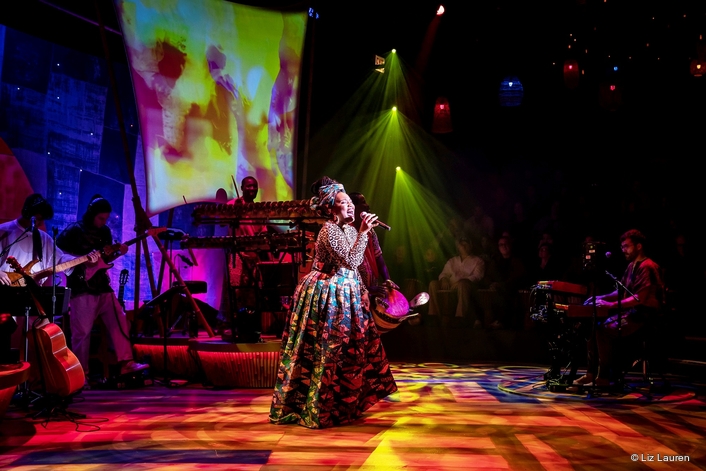 Telling the audience where to look with light

The designer used Platinum Spot III™ moving heads, vertically, at the proscenium line to create what he calls a “false proscenium of lighting” to help focus the viewer and keep eyes on what is to be revealed. “These also functioned as ‘hype lights’ as they did effects onto the audience to make them feel a part of the show and pumped up.” Finally, 6 ACL 360i™ single beam moving heads on the bandstands operated as uplights from the back, shooting past the performers to provide further interest, and depth, to the stage picture. “These lights also kept the eye level low, always telling the audience where to look. I love the continuous pan/tilt function on the ACLi units. Those were very successful in one of our finale mega-mixes!” 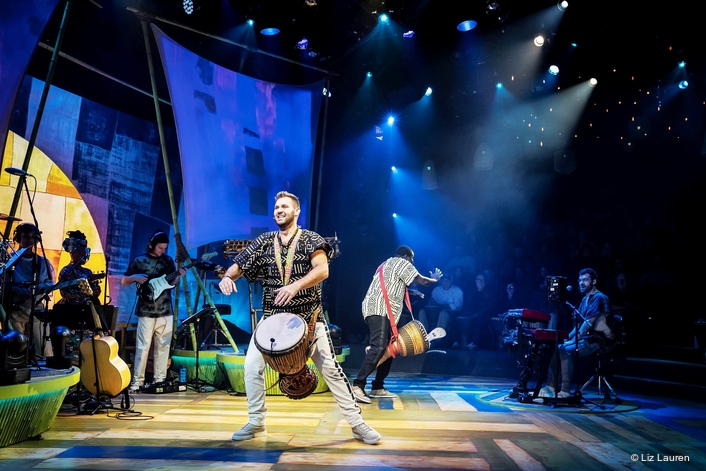 Blane appreciated the intelligent aspect of the rig and the many benefits it gave, stating, “I enjoyed the fact that I could change color instantly on any of these lights, and the repeatability is good. Also, I enjoyed that since these fixtures are all LED, I could make them blink/strobe at any point for any duration without the concern of blowing a lamp.” The designer thanks John Dunn and Jean Lariviere (Elation), Grant Simmon (ILC), Nykol Dedreu, Lane Marsh, Margaret Hartmann, and Daniel Friedman (Djembe) “for their help in making this rig a reality!” Anke dje, anke be!

Elation Upgrade for Poppodium Nieuwe Nor, The Netherlands
Over 500 Elation DARTZ™ on Paul McCartney “Freshen Up” Tour
Elation DARTZ™ for KISS “End of the Road” World Tour