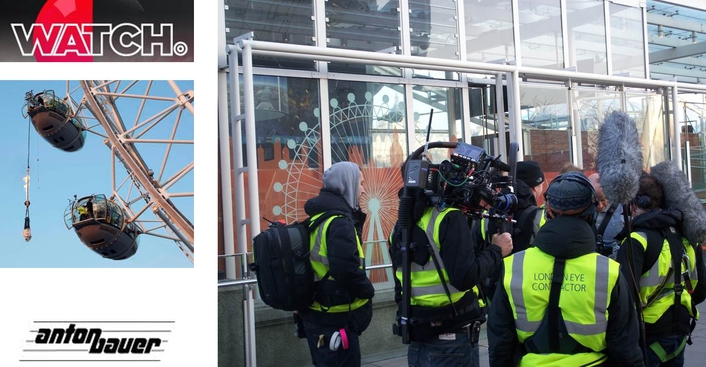 To this end, he utilized the new Gold SpectrumTM Wireless Kit and AB Direct VU handheld confidence monitor/COFDM diversity receiver from Anton/Bauer®, part of Vitec Videocom, a Vitec Group company, and a premier global provider of batteries, chargers, lighting and other mobile power systems for the professional broadcast, video and film industries, powered by the company’s DIONIC® HC batteries.

For the early-March stunt, Goodwin was hung upside down and trapped in a straitjacket 200 feet off the ground from one of the EDF Energy London Eye’s capsules, and had only minutes to escape from a burning rope attached to the pod. “We started prepping this epic stunt about a month or so in advance, we had meeting after meeting to secure the Eye and the area surrounding it, not to mention the clearance to fly a helicopter over and above the Thames to get the shot,” says Richards.

Once confirmed, Richards and his production team utilized multiple cameras to help capture the daredevil’s attempt, including three Sony F3 cameras equipped with Sound Devices PIX 240s to maximize the resolution bit rate, Canon 5D Mark IIIs, GoPros and a HELI-cam with a Canon 5D as well. The Sony F3s were strategically placed on a nearby hotel balcony overlooking the EDF Energy London Eye, with one camera placed within Goodwin’s pod, as well as one on the ground to capture the onlookers. “The technical challenge for me was how could I see what is going on when I’m stuck in the capsule with the stunt team—60 meters off the ground with my cameras a great distance away,” says Richards. “Procam, realizing that there were range difficulties on set, helped organize the collaboration with Anton/Bauer. Anton/Bauer then sorted me out with this new monitoring system, which included the Gold Spectrum Wireless Kit and AB Direct VU monitor which was lightweight and easy to carry around.” 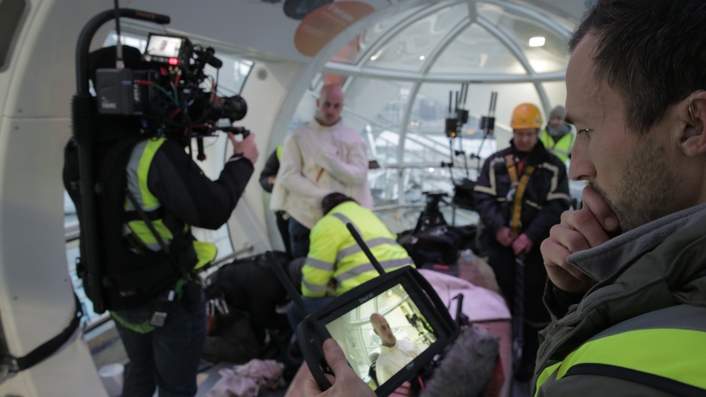 Anton/Bauer’s Gold Spectrum Wireless Kit is comprised of the AB-HDTX transmitter, AB-HDRX dual diversity COFDM receiver and/or AB Direct VU handheld receiver/monitor. As part of the system, the AB-HDTX transmitter sends its signal directly to the AB-HDRX dual-diversity receiver or the Direct VU handheld confidence monitor/receiver. It has an RF output of 100 mW and is capable of accepting a wide range of HD/SD video formats along with embedded audio from the HD-SDI output on the camera. The use of MPEG-4 compression allows the signal to travel half a mile in line-of-site applications. The system offers users the flexibility to choose between 12 different channels in which to transmit, ensuring the least amount of interference. This allows multiple cameras to transmit to one central receive site. A director can conveniently monitor different shots and make adjustments in real time from Anton/Bauer’s AB Direct VU—the handheld monitor plus receiver—powered using Anton/Bauer Gold Mounts® and batteries. The receiver/monitor displays COFDM video transmissions using a built-in, internal nine-inch 16:9 format screen. The bright, high-resolution 1200-NIT, 1080i HD LCD screen makes the unit suitable for a variety of uses, including ENG/EFP, cine, OB, film production and sporting events. The high-bright LCD screen is easy to read in daylight and it also features a simple-to-use menu-driven interface.

“I was blown away at how crisp, clean and flawless the image was,” says Richards. “Especially because I was inside what is effectively known as a Faraday cage. They’re notorious for breaking up radio, transmission, audio and video signals and the like. The fact that the signal was strong enough to get through the cage that the EDF Energy London Eye capsule created was really impressive in itself.”

Richards also says that there is no other system he is aware of that would be able to the job as well as the Anton/Bauer systems did. “There was a big concern that we were taking a risk with a new system, but the reward was absolutely worth that risk. Going forward, I’m going to try and get this Anton/Bauer gear on as many productions as I can, especially critical one-shot wonders where failure to get the shot is not an option. It’s a worthwhile investment.”

The Incredible Mr. Goodwin debuted on the U.K.’s Watch channel, Thursday, March 7 at 9 p.m.; with this stunt to appear on the April 4 episode.

About Anton/Bauer
Anton/Bauer is recognized as the world’s innovator and a premier provider of batteries, chargers, lighting and other key mobile power systems for the professional broadcast, video and film and medical technology industries.  Based in the United States in Shelton, CT with offices in Europe and Asia, Anton/Bauer was established in 1970 and has expanded its product offerings to include many signature lines such as its leading Gold Mount® system, InterActive® chargers and Logic Series® batteries such as the HyTRON® 50, 100 and 140, and DIONIC® 90, 160, HC and HCX. Their products are compatible with every camera brand on the market today.  Other Anton/Bauer high performance products include the Ultralight® 2, ElipZ®, CINE VCLX and the Tandem 150 Modular Charging System. Their superior-quality products have become an industry standard.