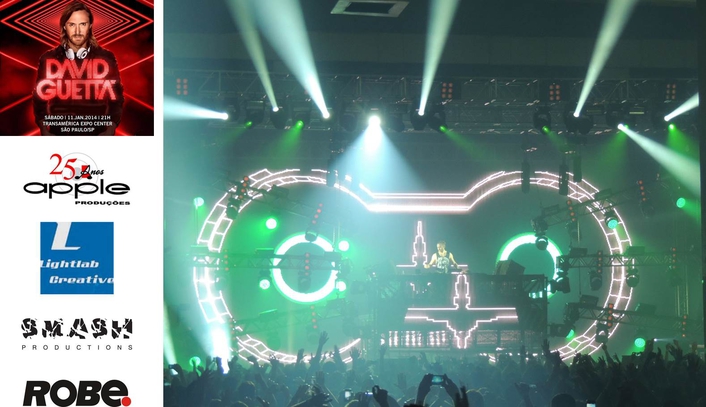 .
DJ, Record Producer, Superstar and arguably the most popular EDM guru on the planet David Guetta completed an incendiary 9-date Brazilian tour in January, which saw Robe moving lights on the spec for most of the shows.

Guetta’s lighting is designed by Jonathan ‘Leggy’ Armstrong – well known for his imaginative and stylish shows which have graced several leading dance acts including Basement Jaxx. The touring team works with entirely locally sourced productions wherever they play, and lighting on the road for this leg of the ongoing world tour was overseen and operated by two Lighting Directors – Alex ‘Junior’ Cerio of Smash Productions and Sam MacLaren of LightLab – both also LDs in their own right. 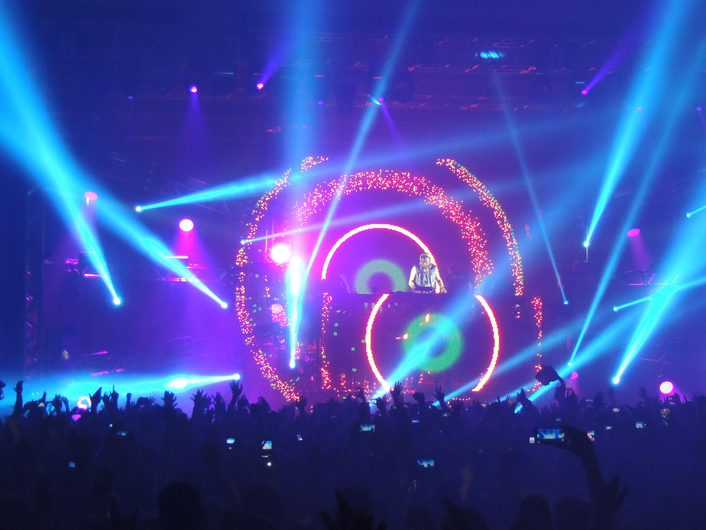 Between them and the video visuals produced by Ben Brett’s amazing and unique Pilot video control system, operated by Nick Briggs, Guetta gets a dynamic world class show wherever he plays.

This is also a very exciting and refreshing way to work, fusing structured elements  with improvisation and live operation involved every night as the show plays out. The Pilot visuals will often set the tone and colours of the track, and both lighting  and video work harmoniously contrasting and complimenting.

As Junior puts it, “David DJs all night … and in essence we all adopt the same modus operandi”.

Due to the punishing gig schedule of the Brazilian tour, Junior and Sam split LD’ing duties between them.

Junior had Robe gear on all his shows, starting with an all Robe rig in Guaruja and finishing in Ribeirao Preto.

“I’m always happy to see Robe on the ‘contra’ rider,” Says Junior, who likes the ROBIN range in particular and further comments, “There’s a really nice continuity across the LED fixtures, the Pointe and the MMX units, especially while programming, using the internal macros, etc.” 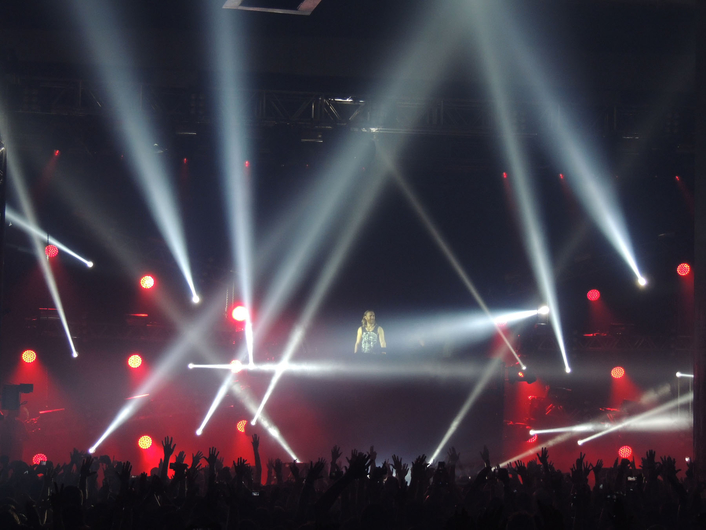 He observes that he is seeing Robe at shows increasingly regularly, and particularly since he started working with David Guetta 3 years ago. “The pricing structure seems to have allowed companies in all parts of the world to get their hands on decent numbers of Robe fixtures,” he reports.

Junior was one of the first LDs to use Robe’s best-selling Pointe multi-purpose fixture  on a live show .. very shortly after the Pointe was launched, which was at a festival in Hannover in April 2013. The Pointes had come straight from the factory, and due to the time constraints he had precious little chance to experiment whilst programing.

With a serious amount more Pointe experience under his belt, the overnight programming sessions in Brazil certainly allowed him to give the Pointes a good workout!

He took full advantage of the zoom and focus for building eye-popping transitional cues, and felt he achieved the best effects if the gobo or prism changing was hidden with a quick blast of the Molefeys. He devised a striking look by swapping a gobo behind changes in the zoom and focus wheels which he could only do with Pointes on the current rig layout. “It looked very cool”.

He really enjoyed working in Brazil again and comments that the Brazilian companies and crews are great to work with, the gear is usually well maintained and of a good standard and the companies are experienced and knowledgeable. “It’s a pretty tight family there” …. And of course … “The audiences and the vibes generally are fantastic!”

Sam had to wait until Sao Paulo to use Robe kit on the tour where the show at the Transamerica Expo Center was again supplied by Apple, who have a large selection of Robe fixtures in their rental inventory. 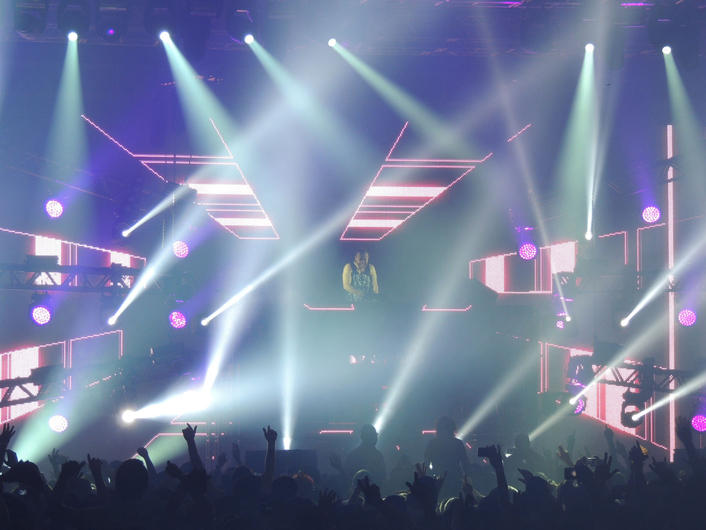 In Sao Paulo, the LEDWash 600s were rigged on ‘wing’ trusses reaching between the side of the stage and the DJ booth; the MMX Washbeams were deployed on the front  truss and both upstage and downstage on the floor, while the Pointes were spread out on the wing trusses and around the DJ platform’s rear LED screen.

He was extremely happy with the results, saying, “It was a great combination of responsive lights – where shutters and colours, etc. react instantaneously to a quick stab of a flash button – and console (a Hog 4) together with atmospherics” (courtesy of MDG fog and haze machines).

Like Junior, he too enjoyed the vibrancy of the Brazilian experience, as well as touring and working with a fantastic crew of highly talented and friendly individuals on the Guetta team under the production management of Alan Green.