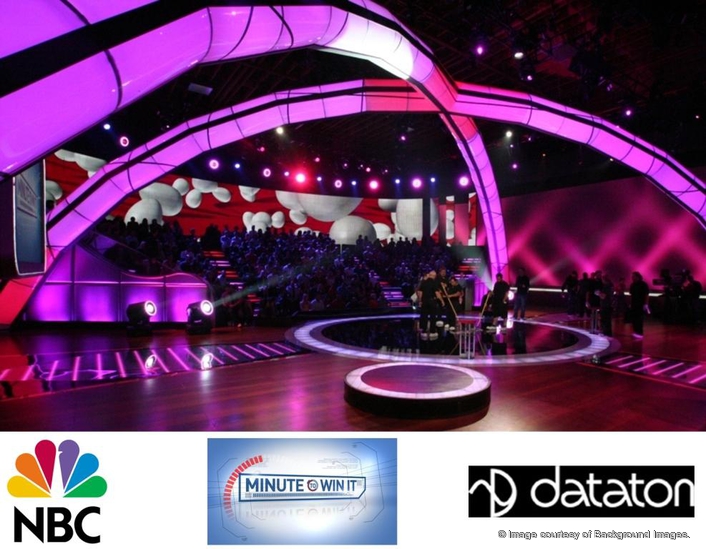 Of one of the most popular NBC game shows broadcast across the US, ‘Minute to Win It’ uses Dataton WATCHOOUT video background
Capitalising on the need for TV set designers, broadcasters and events producers to create ever more dynamic and visually stimulating backdrops, Sweden’s Dataton is bringing its class-leading multi-image display solution Dataton WATCHOUT™ to IBC.

Now at Version 4.2 of its development, WATCHOUT combines multiple projectors or other display devices with standard computer and network technology to create breathtaking presentations of almost any size. The production computer uses a familiar timeline-based user interface to build each audiovisual show, then distributes the relevant media files to the display computers to run the show.

As WATCHOUT preserves the full resolution of all projectors, flat panels, video cubes and LED screens, the highest image quality is maintained, regardless of the size of the total display area. Displays can also be arranged at any angle, in any shape or form, while overlapping projected images are edge-blended automatically.

Commenting on the company’s presence at IBC 2010, Fredrik Svahnberg, Marketing Director at Dataton, says: “In live events production for TV, there’s a revolution going on in front of the camera, as well as behind it. Set designers and content creators are under huge pressure to create compelling graphic and video images which can catch the viewer’s eye without detracting attention from a show’s main message or performance. Using multiple displays of different kinds and sizes and at different angles is a great way of doing this - and with its reputation for ruggedness, ease of use and uncompromising image quality, WATCHOUT is the perfect tool for the job.”

Also being demonstrated at IBC is Systems Manager, a new Dataton tool that allows graphic user interfaces to be created for remote control, programming and scheduling of WATCHOUT.

Already installed in hundreds of venues and used in countless live events all over the world, WATCHOUT continues to lead the way in multi-image content creation and distribution, more than a decade since its release. This year, more than two-dozen of the World Expo 2010 pavilions in Shanghai made use of the system, with over 130 WATCHOUT-equipped computers producing the AV show in the Macau pavilion alone.

Fredrik Svahnberg concludes: “IBC is at the centre of the content creation revolution and we are looking forward to showcasing WATCHOUT. Anywhere that exciting, dynamic multiple displays are needed is where our systems shine, and we believe the broadcast and production industry will be no exception to this rule!”

Renowned Swedish show control developer and manufacturer, Dataton has firmly established themselves on the international market since the 1980s. The company's flagship products include the award-winning Dataton WATCHOUT™ multidisplay production and presentation system as well as the intuitive Dataton PICKUP™ audio guide. The latest addition to the product portfolio is the WATCHOUT Systems Manager, incorporated in the latest version of WATCHOUT. The systems manager is a powerful toolkit for creating interactive front ends to control high-impact WATCHOUT presentations. For further information about this and other leading products please visit