The impressive stage in studio 30/31 was built by the MMC Art Department
On December 16th, 2012, Jean-Michel Aweh (age 20) won the contest and the prize money of 100,000 Euros in the finale of "Das Supertalent", the German edition of "Got Talent". Aweh received 25.39 percent of the audience votes for performing a song that he himself had composed and written.

Jean-Michel Aweh won the 6th season of "Das Supertalent" against 44,000 competitors. The audience voted for him via phone call or text message.

His winning song (Raus aus dem Nebel, meaning Out of the Fog) was released by Sony Music Germany that same night on all available download portals. The release date for the album of the same name is December 21st, 2012.

The Production
The finale of "Das Supertalent", as well as the two previous semi-final shows of the sixth season, were broadcast live from MMC’s studio 30/31 at the Coloneum studio lot in Cologne, on behalf of Grundy Light Entertainment.

The impressive stage in studio 30/31 was built by the MMC Art Department, according to a design by Wieder Design.

A total of 12 cameras were used for the HD-production, which was directed by Volker Weicker. These included five Grass Valley (GVG) LDK 8000s (equipped with Canon EFP 27x to 72x lenses) on Vinten Quattro pedestals.

The camera type GVG LDK 8000 (each equipped with a Canon ENG 11 x 4.7 lens) was used on the two SuperTechno 30-cranes, and also as a hand-held camera.

One wireless GVG LDK 8000 (equipped with a 14 x 4.3 lens) was used as steadicam and another one was used on a SAM-Dolly. The wide shots of the studio were done with a GVG LDK 8000, equipped with an Abakus Stadium lens. Furthermore, one of the world’s smallest full HD-3-CCD cameras with remote head, the Toshiba IK-HD1, was used for the show.

The video signals were mixed on a GVG Kayenne XL (3.5 M/E) at MMC’s HD control room 11 and transmitted to a play-out center in Cologne via two separate fiber optic routes.

The playbacks were carried out via four channels on a Grass Valley Summit Server. Two networked EVS XT2s were used for the highlight editing and the slo-mo. For further processing, the show was recorded on two Summit channels and four Sony XDCAM HD VTRs.

At the final show, the wireless system Digital 9000 by Sennheiser was used. This brand-new digital system was launched by Sennheiser at the IBC in Amsterdam in September 2012. It transmits completely uncompressed audio, featuring an outstanding sound quality. 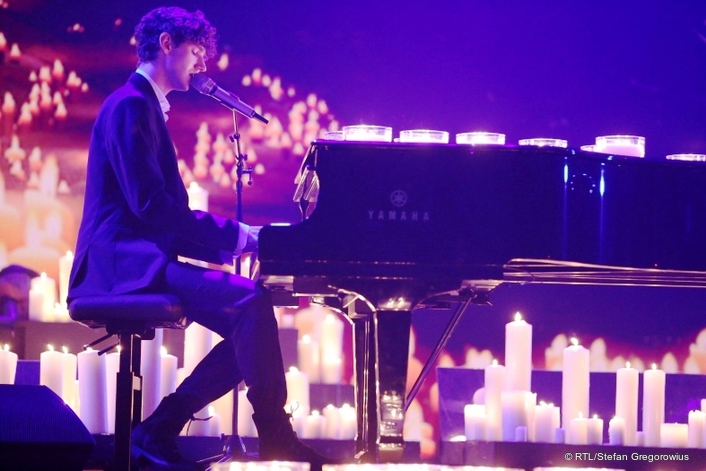 The editing for the rebroadcast of the final show was done in the MMC post-production with Avid’s Media Composer 6. The cutter captured the program image live, using Media Composer. The clean feed that is needed for adding new lower thirds was recorded via the Summit Server and made available to the cutter via the MMC network.

In addition, there was highlight editing of ENG material from the candidates before the show and of material from the show that was captured with another Media Composer. This enabled the cutter to immediately access the material, after each candidate’s performance. A total of three Avid HD editing suites were used at MMC for the editing of "Das Supertalent".