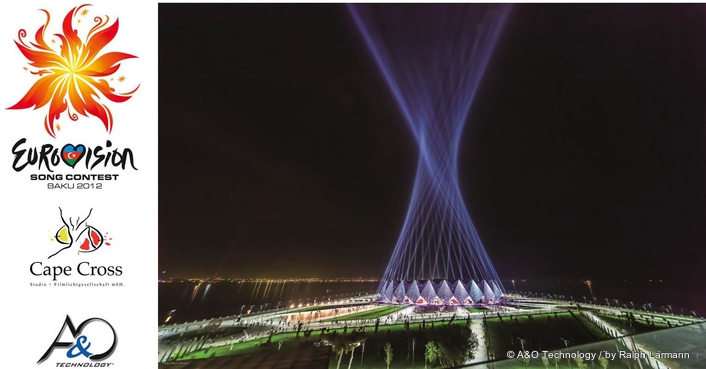 Baku Crystal Hall within the A&O FALCON BEAM Searchlights
With the urgency implicit in the title of its own entry, "Running Scared", Azerbaijan had within the space of a few months erected an arena of exceptional architectural merit in which to stage on its own territory the Eurovision Song Contest. And to ensure a light show every bit as magnificent, the crew that had handled last year's final in Düsseldorf was retained: Cape Cross Studio + Filmlicht GmbH as general technical contractor along with lighting designer Jerry Appelt.

Also present were a host of FALCON luminaires from A&O Technology. Their task was to ensure not only that the performers on stage shone but also that the venue itself was seen to best advantage, through an artistically choreographed light show. When all the votes were in, the result was incontrovertible: Loreen, with her song "Euphoria", won by a landslide, ensuring that the venue for the next Eurovision Song Contest, in 2013, will be Stockholm. In fact, the 372 points garnered by the Swedish singer gave her the second highest score in the history of the ESC.

This year's Eurovision Song Contest in Baku, Azerbaijan, generated a great deal of publicity. Not all of it devoted to the subject of immediate relevance: music. Nothing, however, could detract from the splendour of the event itself. Despite a great deal of heated discussion, the contest went ahead in the 'Land of Fire', Azerbaijan, and the high expectations for the show were not only met but exceeded, for the lighting design devised by the German lighting designer Jerry Appelt embraced not only the interior of the Crystal Hall in Baku with its integrated Green Room but at the same time cast the entire 25-metre-high arena in the most flattering light. Alongside, the world's highest flagpole in the nearby National Flag Square was virtually dwarfed.

For the multifarious lighting images he created, Jerry Appelt specified inter alia FALCON FLOWER colour 7.000W and FALCON BEAM colour 7.000W luminaires from A&O Technology. Cape Cross Studio + Filmlicht GmbH, the general technical contractor, had had some seventy FALCON luminaires transported from Germany to the capital of Azerbaijan to provide the two semi-final shows as well as the grand final with their optical highlights. The FALCON FLOWER luminaires were deployed inside the auditorium, where they were installed both above and below the stage, producing magical scenic effects, the impact of titles like Donny Montells "Love is Blind“ (Lithuania) and Loreen's "Euphoria“ (Sweden) being dramatically enhanced by the raiment of filigree threads and sequins woven and scattered by the lights.

Roman Lob (winner of the German casting show "Unser Star für Baku“), representing Germany with the song "Standing Still“, finished in eighth place; but his performance could hardly compete with the mystical, near-solo performance by the 'wood nymph' Loreen, whose song "Euphoria", with its David Guetta-like sounds, struck a chord with viewers throughout Europe. Perhaps the lighting design, which bordered on minimalism but was scarcely the less poignant for that, contributed to this triumph. Her unusual performance was thrown into relief by the play of light and shadow. Seldom can the distinct and filigree beams of the FALCON FLOWER have been used to such magical and impressive effect. Jerry Appelt certainly knows his craft inside out, as well as being exceptionally well versed in the devices of the FALCON range.

This was already evident from outside the building, for the spectacular light show was by no means confined to the interior. The stage provided by the unique location on the shore of the Caspian Sea was also illuminated and rendered visible for miles around. The Baku skyline was the richer on the three evenings the competition lasted for an illumination at once vibrant and informative, as the diamond-like facade of the Crystal Hall, studded with lighting elements, was bathed in the national colours of whichever country's performers were at that moment on stage. In addition, the hall, which is over 200 metres long and 160 metres wide, was ringed by FALCON BEAM xenon searchlights, for which an elaborate choreography had been programmed in which the beams opened, closed, flickered and created impressive patterns.

So in the end Baku showed that despite all the controversial coverage, in musical and technical terms, when it came to putting on a show, it was a worthy setting for the Eurovision Song Contest. Anke Engelke, the president of the German jury, who was charged with announcing live the destination of the German votes, took advantage of the chance this afforded to direct some carefully chosen words at Azerbaijan's authoritarian regime. "Tonight nobody could vote for their own country. But it is good to be able to vote. And it is good to have a choice. Good luck on your journey, Azerbaijan. Europe is watching you!” 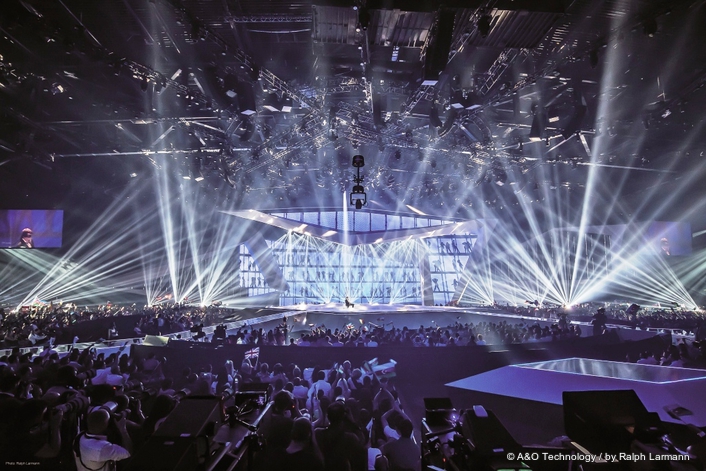 The Eurovision Song Contest is the world's largest live music competition. The official production partner of the ESC 2012 was Brainpool TV GmbH. In 2012, forty-two countries participated in the contest, the motto of which was "Light your fire". Completed in April, the Crystal Hall in Baku accommodated some 16,000 spectators. According to Eurovision.de, the live transmission from Baku on German television's Das Erste (ARD Channel One) drew an average of 8.29 million viewers.

About A&O Technology:
A&O Lighting Technology GmbH, founded by Marco Niedermeier, has been engaged since 1995 in the distribution and rental of specialized lighting equipment to numerous internationally recognized architectural and entertainment projects. Its exclusive distribution portfolio includes the A&O FALCON® range, which comprises a variety of architectural spotlights and searchlights manufactured by the in-house manufacturer alpha one.High-quality equipment, international cooperation and a creative team of employees have allowed A&O Technology to develop into an enterprise active worldwide in the distribution and rental of high-tech products for a wide range of applications — often to spectacular effect.A&O Technology is headquartered in Bremen, Germany, with subsidiaries or bureaus in UAE, USA and UK and holds project partnerships worldwide.