Creative Technology at the ESC 2011: Seeing Beyond the Vision 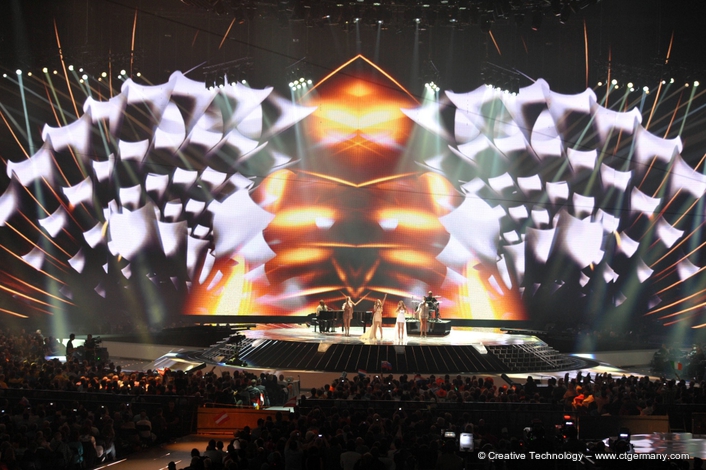 The Wieder/Appelt design was dominated by a 1250m² expanse of Spider 30 LED screen
Its easy to hide behind a wall of superlatives, bigger, heavier, brighter, bolder, sharper; and for Creative Technology this years' Eurovision Song Contest was all those things and more; but it's the little details that put the polish on this project. "The spectacular creative design from Florian Wieder and Jerry Appelt stretched us in places we'd never been stretched before," said head of CT's Dusseldorf Office, Alex Klaus, and the man responsible for running the project.

The Wieder/Appelt design was dominated by a 1250m² expanse of Spider 30 LED screen; at twice the size of the infamous U2 Pop Mart screen, it completely filled one end of the Esprit football stadium in Dusseldorf. "That's almost the entire worldwide inventory of Spider30," said CT's MD Dave Crump, over from England to witness the event. "We've pulled in resources from the US and UK to support CT Germany, but as Alex said, it's the small stuff that really stretched us." The 'stuff' might have been small, but without it this show was never going to happen. 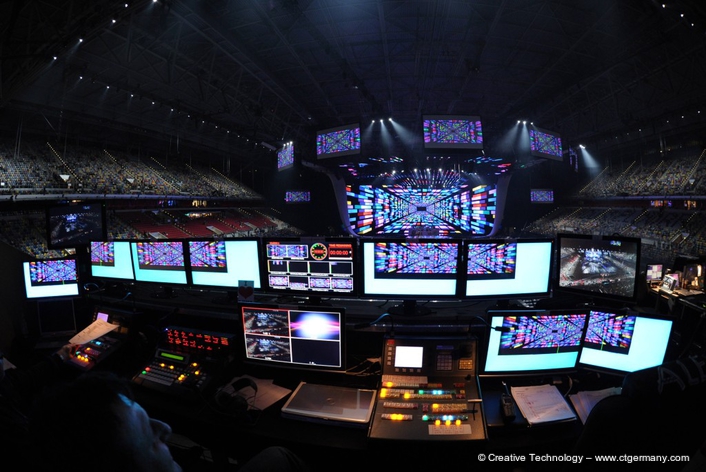 "There are twelve 10x6m projection screens with Barco HD20 projectors flown out in the audience area," explained Klaus, "and over three thousand pieces of Barco MiTRIX and MiSTRIP in the lighting system or built into the stage set. All of this required video processors, data feeds and power, as did the further 1600 pieces of Schnick-Schnack strips we built into the Green Room back stage."

Feeding the projectors spread across the nine hectares of roof space was a challenge that paled into insignificance compared to routing mains and data to the Barco LED elements throughout the lighting rig and stage set. "The LED elements were extremely widespread," explained Klaus, "and there's a finite limit to how far a given video processor can transmit data. Those two factors combined to mean we needed far more processors than the destination LEDs required, and we had to build the cables to go with them." Ten kilometres of new data and mains cable was commissioned to connect a vast array of Omix controllers and DX700 processors sourced from rental companies across the globe. 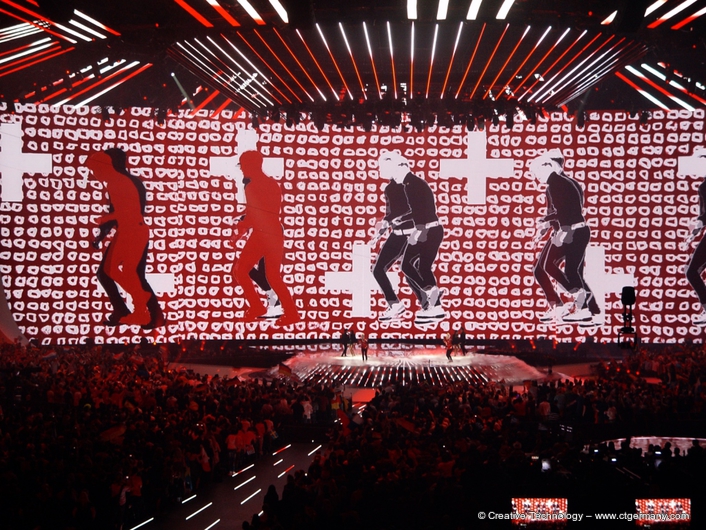 "Our design concept was simple enough," said set designer Florian Wieder, "we elected to use a relatively small stage at 15m diameter to retain a certain intimacy; after all there's only ever a maximum six people on stage. But to then make the 36,000 people out in the audience feel part of the show we had LED strips integrated into the lighting rig above, and into the arena floor below, all the way to the extremities of what would normally be the football field." Lighting designer Jerry Appelt agreed, "it gives a sense of scale without losing the tight atmosphere on stage. The fusion of lighting and video content streaming from the MA Servers CT has kindly invested in specifically for us, has allowed us to create a coherent visual environment that works for the broadcast image without compromise to the visual spectacle for the audience in the stadium."

The final element in the CT jigsaw was the content playback and screen control system. Two identical systems were installed allowing 100% redundancy and operated in parallel by dedicated engineers. Each system included seven MA servers, selected by Appelt and purchased by CT for the project; image compositing was performed with Barco Encore and signal routing and distribution handled by a pair of DVI matrix's outputting over 6 kilometres of fibre cabling to the various processing and projection locations. 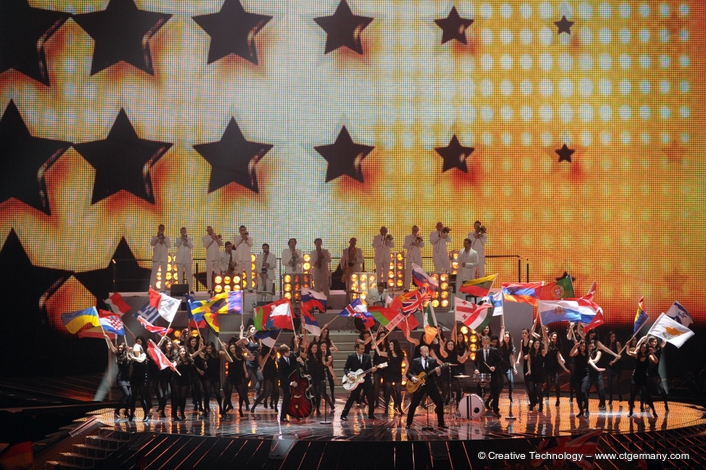