Australian pop sensation Kylie Minogue recently completed the first leg of her Kiss Me Once tour, which included stops throughout Europe. The second leg of the tour begins in March 2015 with five shows in Kylie’s native Australia. Following the successful tour of Europe, Lighting Designer Rob Sinclair and Lighting Director Louisa Smurthwaite provided insight into the creative processes behind the tour’s extensive lighting design, which prominently featured fixtures from HARMAN’s Martin Professional.

Very early in the process, even before the new music was available, Sinclair had a meeting with Creative Director William Baker and Set Designer Alan Macdonald, during which it was decided that ‘precise geometry’ and ‘Bauhaus aesthetics’ were to be the key themes for the set design, inspired by the lines of the set and the early costume ideas. Baker then created a very detailed and instructive style guideline for each section of the show. For Sinclair, this was extremely useful to begin the process of designing the lights. About a month before rehearsals, the music arrived and Sinclair began working on the lighting design, creating a series of detailed notes.

Sinclair sent his notes and instructions to Smurthwaite who patched it up and set up the consoles. By now it was time for band rehearsals and Sinclair and Smurthwaite spent two weeks in a small, badly ventilated room to pre-visualize the preliminary design in action and to make adjustments where necessary. Next came ten days of strenuous production rehearsals, during which the duo learned that nothing from the pre-visualization worked. Consequently, the design had to be changed an additional two or three times to ensure all the details were correct as well as incorporate feedback from Baker and Kylie.

“Nothing from pre-visualization ever works,” says Sinclair “It’s useful to have a start but the transfer from screen to reality is always jarring. Baker and Kylie had some great notes about color and pace and we produced pages of our own. We both have a great eye for detail and had long discussions about the timings of single cues.

”Sinclair and Smurthwaite’s final design included 12 Martin MAC Auras and 120 Martin MAC Viper AirFXs, which made up the majority of the rig. According to Sinclair, the lighting design was precise and meticulously detailed.

“We chose them [the Auras and AirFXs] particularly for their brightness,” says Sinclair “We needed a hard-edged fixture that would be visible against a video wall and needed to be seen in the air more than on stage. I did a shoot-out in Vegas and the AirFX was the clear winner.” 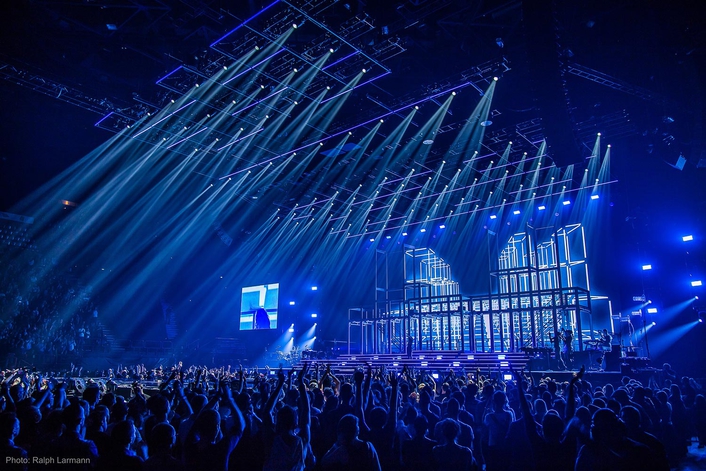 Working with this large amount of fixtures was a great challenge for this creative duo as it pushed them to develop designs that were more than just ‘here come the spots or the washes’. “Having the purity of one type of light source really captured our imaginations,” says Smurthwaite “It allowed us to create a clever and classy lighting design - it wasn’t obvious and I really like that.”

Talking about the lighting design for a particular song, ‘Kiss Me Once,’ Smurthwaite said they were trying to create an intimate experience for the audience by going from warm, soft looks to bold lasers to a petal drop. “The lights, the effects and the laser paired flawlessly with both the music and Kylie’s stage presence, and the audience got sucked in,” says Smurthwaite. 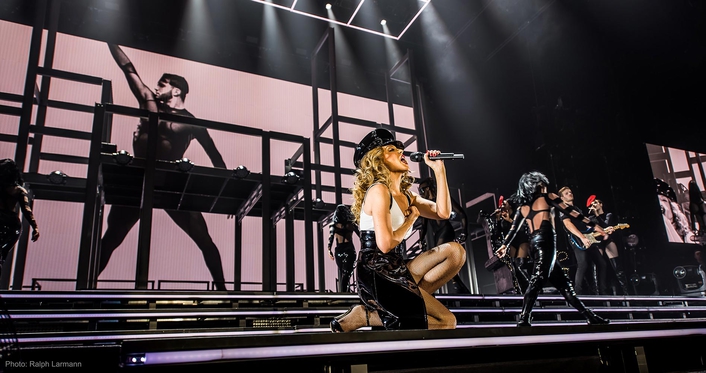 “Musically, I really enjoy the composition,” says Smurthwaite. “The costumes took a life of their own, the dancers looked incredible and it’s where Kylie appeared so close to the audience on the B stage after an onslaught of laser mapping, video content, lighting and dancers. It’s a special moment.”

Ultimately, both Sinclair and Smurthwaite look back on the first part of the tour as a great success. “It was long and at times painful,” says Sinclair. “The drawing of plots and arguing about budgets took most of the summer. I’m not sure that either of us were making sense after so long without sleep but I’m very, very proud of what we achieved.”

While Kylie Minogue prepares for the Australian tour, Sinclair is on tour with Queen and Adam Lambert where he also decided to build an entire rig around the MAC Vipers. Sinclair will be present for rehearsals for Kylie’s Australian tour and Smurthwaite will be running the shows. 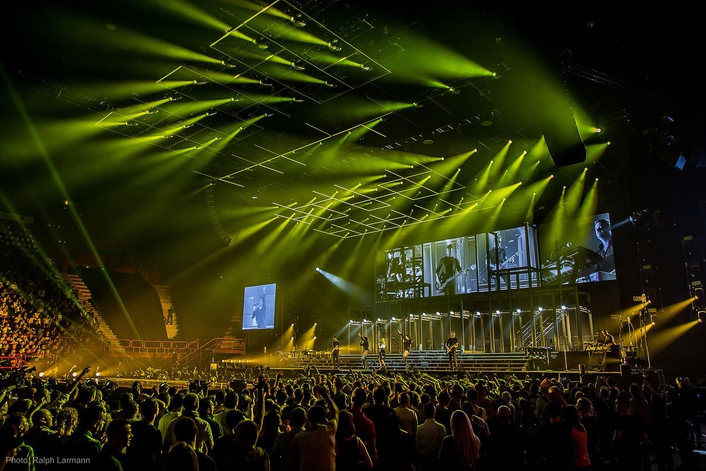 Sinclair trained as an electrician. He started sweeping floors at Vari-Lite and gradually worked his way up fixing lights in the shop, then fixing them on the road, operating other people’s lighting design, then designing his own. He is a new member of Kylie’s team and also designs lighting for Queen, Peter Gabriel, Adele, Pet Shop Boys, Miley Cyrus, Vampire Weekend and several others. He feels privileged and proud to be making a living doing something he loves so much.

Smurthwaite started in the theatre and corporate events industry but left to try working with other technologies for a design multi-media company. She did projection mapping and guerilla marketing with digital equipment and interactive environments. Here, she got mesmerized by lasers and programmed and designed shows for music tours, where she turned up on Pulp in 2011 and met Sinclair. Smurthwaite came along with Sinclair to join the Kylie tour. Since then she has had the pleasure of working with him on Pulp, Bloc Party, Birdy and Goldfrapp. 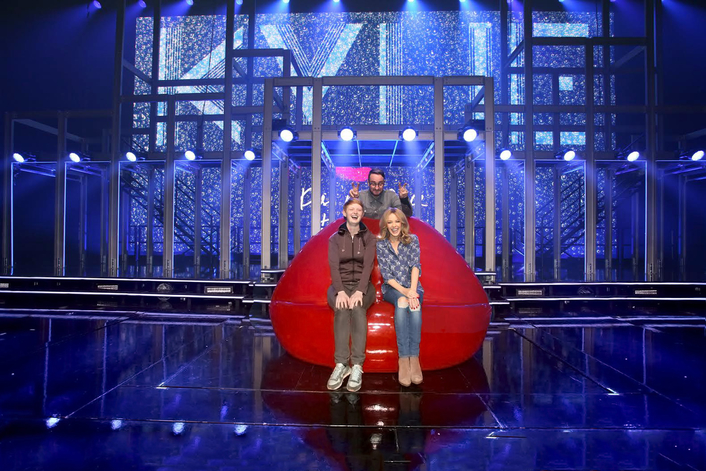