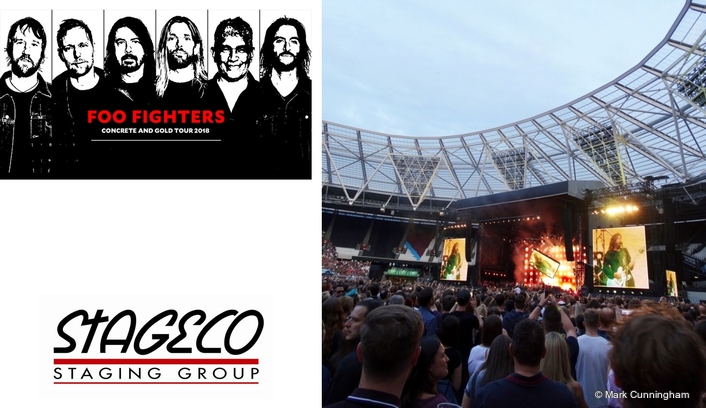 When the cream of live acts graduate to play stadiums, some can find themselves out of their depth. Not so with the Foo Fighters, whose presence and sheer firepower shook the 80,000-capacity London Stadium to its core on two consecutive nights, as they performed on a Stageco stage.

Nine albums into their 24-year career, on their latest tour, Concrete & Gold, the Foos not only deliver a masterclass in how to handle a stadium audience, they have the material and humour, they have Dave Grohl, a living legend who frequently deals out profanities with the same ease as his guitar riffs, and then there is Taylor Hawkins, whose adrenalin-soaked drum solo – on an ascending riser, no less – is one of the three-hour show’s biggest highlights. 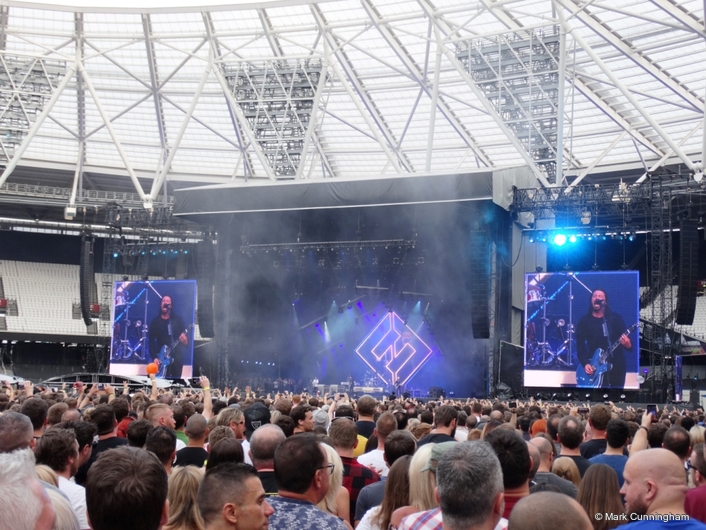 Essentially treated as a one-off for Stageco, the Foos played under a regular Super Roof, the company’s second largest after its voluminous XXL model, which was constructed within three days by a team headed by David Van Assche, who held the same position last summer on tours by Jeff Lynne’s ELO and Guns N’Roses. “This roof came from another one-off in Hamburg,” said David. “On a tour, we could take half a day off of the build time, but one-off shows like this don’t carry the same momentum.”

The equipment arrived at the former London Olympics venue in Stratford in 17 trucks. Twelve Stageco crew including some new staff, set to work on the build with assistance from 15 local crew climbers and 15 hands. The roof was lifted using the latest generation, computer controlled winch devices. David commented: “It was a heavy build for us, however, after Beyoncé & Jay-Z’s shows at this stadium, Antonio Duarte Da Cruz’s team had a two-day break and so they helped us out which meant that at one point we had 20 people working on this.”

Although it may have appeared to be a standard festival roof to the casual onlooker, it was reinforced to be stronger than usual in order to offer a weight capacity of 40 tonnes of production, including PRG’s lights and upstage WinVision screen, which was configured within a flown diamond-shaped frame. Measuring 25m wide between its towers and 61.12m between the edges of the large PA and video scaffolding wings, the stage had a depth of 15m and a trim height from the floor to the bottom of the truss of 16.55m. 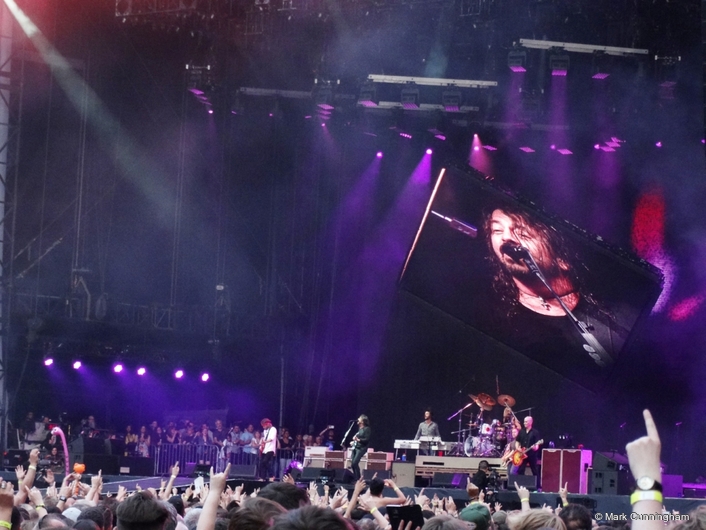 The total height, said David, was 25m. “It fits just 1.5m under the stadium roof,” he observed. “That is the maximum height we can achieve at London Stadium. We pushed the stage back as far in front of the audience stand as it would go.”

While the 80,000-strong crowd thrilled to the sound of ‘The Pretender’, ‘My Hero’, ‘Best Of You‘ and ‘Everlong’, David Van Assche was getting some beauty sleep ahead of a long load-out. 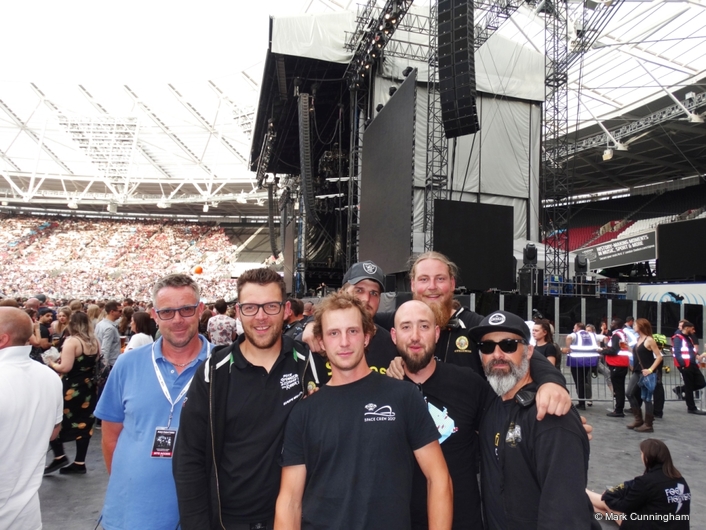 He described the process: “Directly after the show, the skins are removed along with much of the scaffolding, upstage ramps and delay towers. Production is gone by around 2.30am and that gives us the green light to go full steam ahead on the remainder of the break down. At 5.00am, we bring in a crane with myself and two other crew, and we stay until the last truck is loaded at 8.00pm. I can then look forward to a well-earned beer!”

At the Foos’ two London Stadium shows, they were supported by Wolf Alice, Frank Carter & The Rattlesnakes, The Kills, Slaves and Starcrawler. The Super Roof remained on trailers for three weeks before being rebuilt at Twickenham Stadium for Eminem’s two show on July 14th-15th, part of his Revival tour of Europe. In the meantime, David was preparing for his next Stageco project: a Bruno Mars show on June 30th at the Stade De France in Paris.