Colour Sound For We Are FSTVL

It was the second event after bursting audaciously onto the EDM scene last year and this year the organisers upped the ante on several fronts, expanding the event to two days, increasing the level of production and securing an action-packed line-up with main stage headliners Richie Hawtin (Saturday) and Fatboy Slim (Sunday).

Colour Sound deployed five trucks of kit, 26 crew, around 500 square metres of their proprietary BT LED screen, over 350 moving lights and a shed-pile of strobes, blinders and atmospheric effects to the site, where all their elements were co-ordinated by Crew Chief Andy Melleney.

Colour Sound’s MD Haydn Cruickshank comments, “It is always great to work on something fresh and new, as well as with a client who really understands the importance of production values and how they can enhance an event”.
Production designs and specifications for ten live performance stages and arenas including a comprehensive VIP area were created by Colour Sound’s Haydn Cruickshank and Fletch.

On the Main Stage, they worked closely with scenic elements created by Joe from Scruffy Dog and based the lighting rig around the requirements of Fatboy Slim (LD Abbis) and Richie Hawtin (LD Matthias Vollrath).
Other than this, the lighting was flexible and versatile enough to give all artists a good looking show and provided plenty of scope for creating a good visual impact during the daylight hours - which constituted most of the event – as well as after dark. 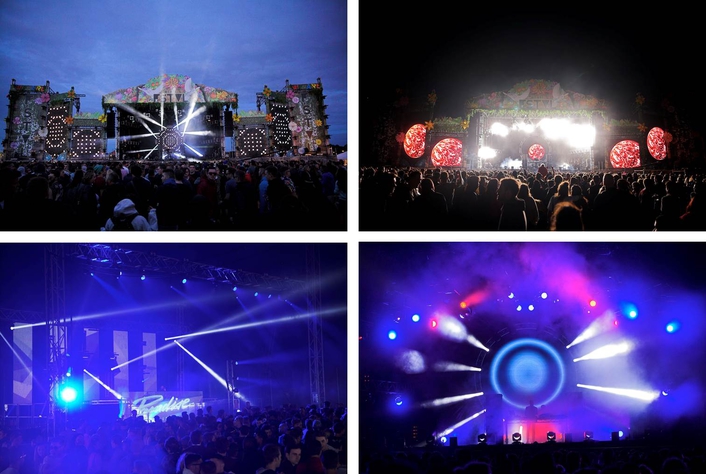 Over 200 moving lights included newly purchased Robe Pointes and Robe LEDWash 600s together with Clay Paky Alpha Spot 1500s and Sharpies, with the option of either grandMA2 or for Avolites control.

The Main Stage was run by Chris Steel, Hadyn Williams and Dave Kyle. Video control and content was overseen by Richard Bagshaw from Digital Insanity and Nigel Sadler from Green Hippo.

The Great Outdoors was the second outdoor stage, designed largely by the promoters with a few steers from Colour Sound adding their vast experiences of the genre to the equation.
The end result was another spectacular looking performance space, featuring a BT12 LED screen upstage and in front of the DJ booth, with five distinctive diagonal lines of BT12 attached to each of the wings – which was a challenge for the riggers! 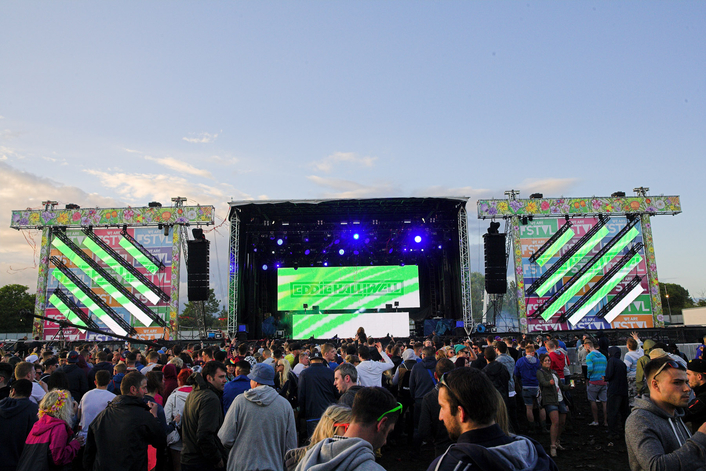 The diagonal lines of video were interspersed with lines of IP rated Chauvet COLORBand LED battens, which helped create a nice flow of visuals across the entire stage space.

The lighting on here included around 40 Robe MMX Spots and LEDWash 1200 LED washes, together with 16 x CP Sharpies and more of the ubiquitous strobes and moles – all rigged and used ‘festival-style’. Looking after all things lighting here were Kester McClure, Sam Campbell and Dan Williams.

Lighting control was a ChamSys MQ200. 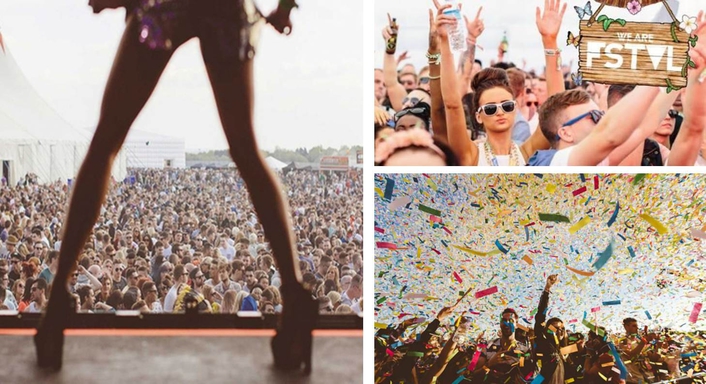 Paradise was the largest of the indoor tented stages this year and the one that contained the most equipment. The video comprised five columns of BT20 and the moving lights were GLP Spot One LEDs, Robe LEDWash 300s and some Beam lights, plus Moles and strobes together with the indoor version of the COLORBands, which are a Colour Sound festival favourite.

Control was a ChamSys MQ300 and making it rock on the operating front were Frankie McDade and Ed Blackwell.

The seven other music stages and areas all featured an assortment of moving lights, blinders and strobes and the visuals set-up in the Silver VIP tent also contained 6 mm screen elements.

The event was another massive success for the organisers despite the erratic weather which kept everyone guessing … and determined to party on whatever … embracing true British festival style!

We Are FSTVL
Colour Sound Experiment