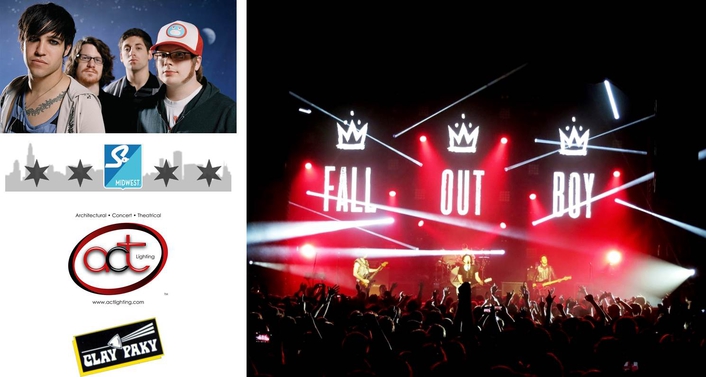 .
After releasing their critically-acclaimed “Save Rock ‘n Roll” album, rock band Fall Out Boy is back on tour in the US and Canada, and Clay Paky Sharpys are along for the dizzying ride.

Lighting designer Robb Jibson of So Midwest, Inc., who has used Clay Paky products on a number of shows, is deploying Sharpys on the Fall Out Boy tour in an unconventional way.  Jibson has opted to use Sharpys as Front of House spotlights.

“Developing a system of front light for a band that never stops moving while playing venues that range from clubs to arenas can be tough,” Jibson admits.  “The quest to have consistent, constant and punchy front lights led me to carry our own.  Using moving lights with the pan-and-tilts disabled is certainly nothing new, but the barrage of questions and sideways looks I get from the local promoter reps means that this hasn’t been done in the FOH position before in these size rooms.”

Using the Sharpys as spotlights enable him to fit lights into venues that normally wouldn’t have room to accommodate traditional, and much bigger, FOH spotlights.  They also lend consistency in this position since Jibson can tour with his own units rather than use spotlights from the venues, which vary widely in style and quality over the course of a tour.

Jibson had been using another fixture for another project and was finding it difficult to get the power he needed at every venue.  “So the hunt was on to find a new solution that could be easier and still meet all the parameters,” he says.  “Enter the Sharpy.  Even at distances up to 175 feet, Sharpy is able to deliver 100 fc at the stage.  Being small and lightweight they can be placed on spot towers, theater coves, box booms, balcony rails, scissor lifts – even on an out building at Stubbs BBQ in Austin!”

Jibson says that “the Sharpys never disappoint, and their low power consumption means that we have a spotlight solution night in, night out for Fall Out Boy.  Using local operators to control the position of the fixtures, the talent stays lit no matter where they go.”

Francesco Romagnoli, Clay Paky Area Manager for North and Latin America, adds, “What an interesting application for our fixtures!  I’m impressed with Mr. Jibson’s innovative use of the Sharpy and look forward to working with him in the future.”