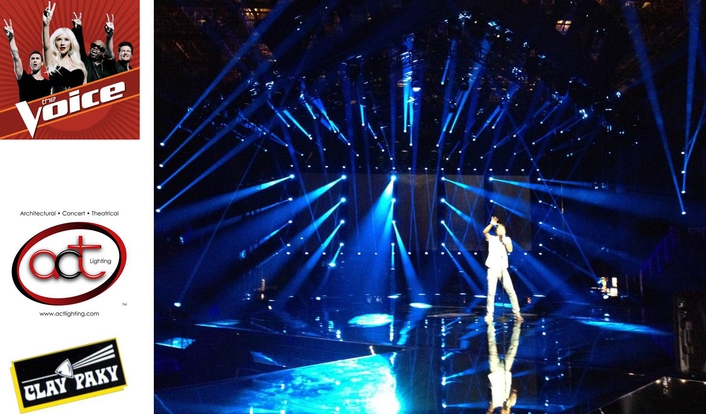 “The Voice” has three components: Blind Auditions, Battle Rounds and the Live competition.  Dominguez, who has done other programs with Burnett, has said he’s always challenged to create “a very crafted, very unique, individual look” for each series.  With “The Voice,” the different components within the show have distinctive looks as well.

Clay Paky Sharpy is a 189W moving head with an unprecedented brightness usually achievable only with far greater wattages.  Tipping the scales at just 16 kg, Sharpy produces a perfectly parallel, laser-like beam with an incredible output of 5,100 footcandles at 65 feet.  It is also groundbreaking in the purity of its beam, which is sharply defined and free of any halo or discoloration around the edges.  It offers an interchangeable color wheel with 14 fixed colors and an interchangeable gobo wheel with 17 fixed gobos, allowing users to change the shape of the beam and create an array of spectacular mid-air effects.

Dominguez uses approximately 48 Sharpys for each of the show’s three components, some placed on the floor and some hung among other fixtures.  “It’s the first time I’m using them,” he notes.  “I wanted the right show that I could put a large quantity of Sharpys on, and ‘The Voice’ is it.  We call the set ‘Sharpyville!’”

Domiguez calls the Sharpy a “phenomenal little light” with “fantastic reach” which “can build these looks and create an entire structure out of the darkness.”  He likes their ability to “cut a razor of color in the sky” and “create beautiful fans.”

Francesco Romagnoli, Clay Paky Area Manager for North and Latin America, adds, “It’s great to see our amazing Sharpys on so many high profile television shows.  The Voice is one of the programs that’s changing the look of live television we’re proud to be able to help with that.”