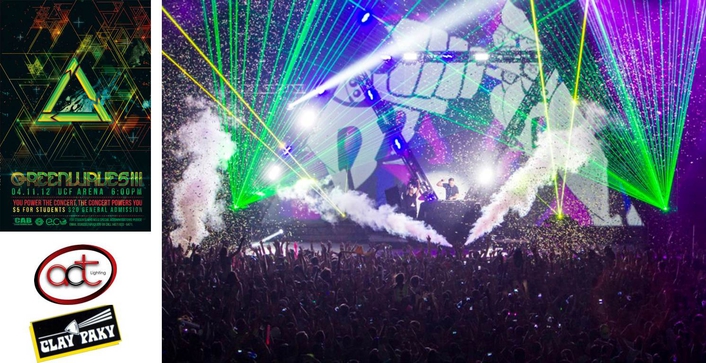 Lighting designer Justin Geiger of California-based Impulse Creative Group used 16 Sharpys for the concert portion of the event, which featured electronic artists and notable DJs.  It was billed as the first interactive concert at UCF and took sustainability to the next level by utilizing a PowerLeap dance floor, which uses “Piezo” flooring technology to convert the energy from the crowd into reusable energy for the concert.

Geiger deployed his complement of Sharpys on the main stage at the UCF Arena.  “We used them on the wings, flanking a 40-foot projection wall and had four on the stage,” he reports.  “We needed fixtures that would deliver the biggest impact for a high-energy electronic show with budgetary restrictions.  We had free reign on design.”

Once Geiger showed his client a picture of what Sharpy can do, “he had to have it,” he says.  “At one point he said, ‘I don’t care what [else] I get as long as I get those Sharpys!’”

Geiger’s Sharpys not only gave a big, dynamic look to the concert but also made the laser light provider envious.  “The laser guy on the show hated them because he thought the Sharpys were gonna run him out of business!” Geiger says.

Francesco Romagnoli, Clay Paky Area Manager for North and Latin America, adds, “One of the outstanding features of our Sharpy is the punch it provides relative to its energy-efficient qualities.  This festival is the perfect place to showcase those features.”