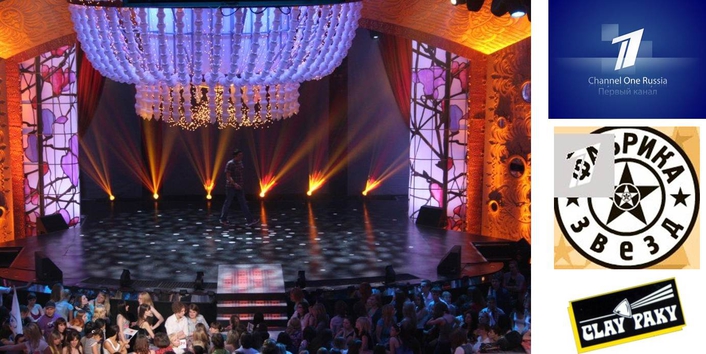 Star Factory lighting designer Leonid Pozdnyanskiy made up his mind to use the Sharpy
Clay Paky’s nimble new narrow beam, the Sharpy, has been given its first airing on Russian television following an appearance on Star Factory, a reality TV talent show broadcast on Russia’s Channel One. Mixing elements of Pop Idol and Big Brother, the contest aims to nurture the next generation of singing talent with help from pop industry veterans.

Star Factory lighting designer  Leonid Pozdnyanskiy made up his mind to use the Sharpy after viewing a demonstration at the studio organized by Clay Paky distributor DOKA.

The show highlights why the Sharpy has become such a popular tool for television work. Although only six units are in use – placed at the rear of the stage – the tight, parallel beams are already an indispensible and distinctive part of the show. "We are pleased that Channel One allowed us to promote Sharpy on Star Factory,” says DOKA’s Vasily Litvin, Brand Manager of Clay Paky. “Sharpy has found an instant fan base here in Russia; those in the studio were absolutely amazed by the output, and we expect great things from this fixture in the Russian market.”

The Sharpy is experiencing a phenomenal uptake in the markets where it has been released, winning both awards and positive reviews in the press. Since launching in January 2011, the fixture has seen action on shows including the Eurovision Song Contest, the NME Awards, BBC’s Blue Peter, Sky TV’s Oscars Night and is on tour with Take That, The Foo Fighters and Ricky Martin.

Weighing just 16kg, the tiny, 189W Sharpy produces a bright, parallel beam capable of matching fixtures of far higher wattages. The secret is a new optical design that creates a crisp, laser-like beam – free of any fuzz or discoloration around the edges.