Clay Paky with Roberto Benigni for "The 10 Commandments" 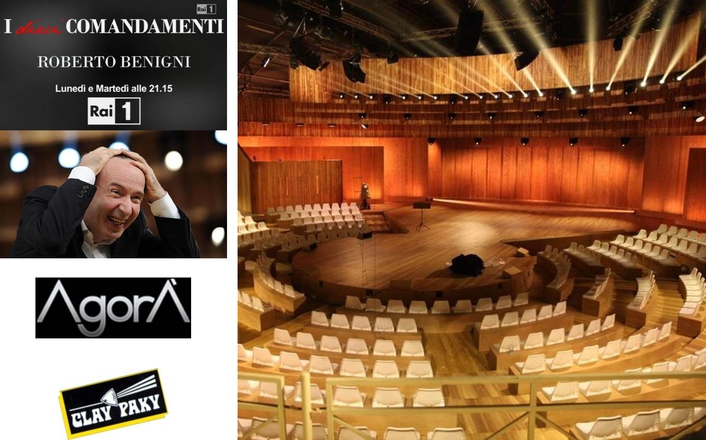 .
Roberto Benigni only rarely appears on television, but every time he does he makes history. "The 10 Commandments" repeated the huge success "the Divine Comedy" had a few years ago. The new show, written and performed by the great Tuscan showman himself, was broadcast live on 16 and 17 December from Cinecittà by RAI 1.

The figures speak for themselves: ten million viewers on each of the two evenings with an audience share just short of 35%. Most of all, though, it was a page of television history that many will remember for the cultural depth it had for the country as a whole: the show was a reinterpretation of the biblical Ten Commandments in sociological terms, highly contextualized in the cultural fabric of today's world, with a clear message of love for life. 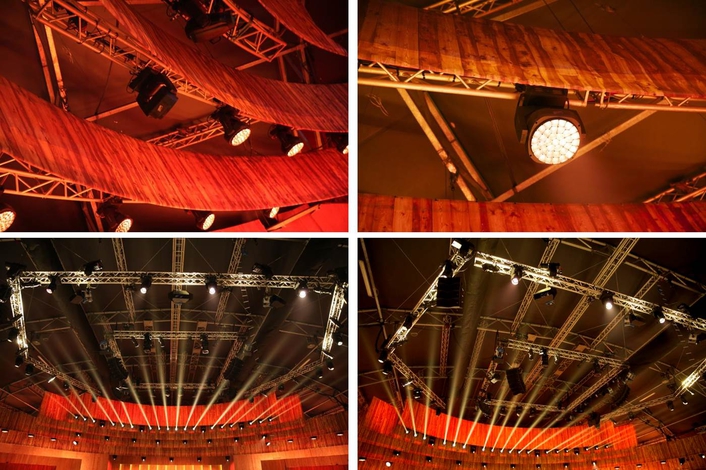 Lighting Director Massimo Pascucci told us how he approached this difficult challenge: "The lighting concept stems from the need to make the wood used in the scenery look its natural colour as far as possible. As we know, some types of wood tend to reflect mainly green light when illuminated. In addition to this, we were not certain how the illuminated scene would be captured by the cameras. One of my main tasks was therefore to eliminate this tendency in the most natural way possible, and ensure optimal colour rendition both for the studio audience and the viewers at home.

Pascucci used Clay Paky lights almost exclusively, including the new A.leda B EYE K20s, about which he told us: "They are very sophisticated lights and - especially - excellent wash lights. I used them to light the scene and achieved the desired result by setting the RAI cameras to 4000 K: the wood preserved its natural colour, slightly tending to orange. At the same time, I set the performer in a sort of warm cosy university lecture theatre. This was the most natural environment given the subject matter, as well as being one of the production team's specific requests right from the embryonic stage of the project."

The rig, provided by Agorà, was completed with Sharpy Wash 330s, which Pascucci used to illuminate the audience "excellently", and Sharpys, which traced out the edge of the scene and enclosed it in a precise space "as only these fantastic lights are able to".

"The choice of Clay Paky lights for this project also stems from a structural requirement relating to the venue: the Pala Studio at Cinecittà cannot take particularly heavy loads, so the light weight and ease of handling of these lights made the rig easier to set up and manage. Clay Paky A.leda B-EYEs, Sharpy Washes and Sharpys are the best modern technology can offer in terms of power, versatility, ease of use and weight."