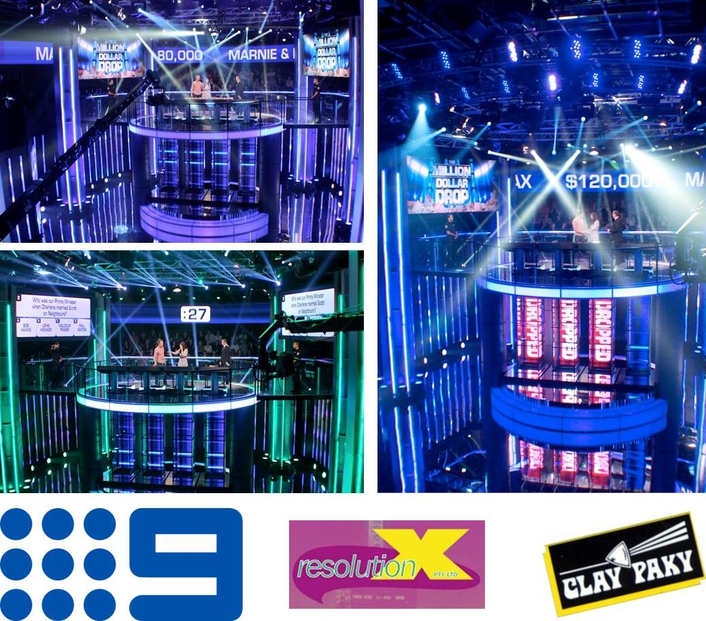 Rohan recently used the Clay Paky Sharpy on Million Dollar Drop
Renowned Australian lighting designer Rohan Thornton can’t stop grumbling about the Clay Paky Sharpy and the Alpha Spot 1500. “On all productions I now instantly specify sixteen of each model – I would ask for more but that’s all there is available for hire!” he protested. “And on top of that, they are becoming so popular I can’t get hold of them. Clay Paky is back with a vengeance.”

As Head of Lighting for Australian broadcaster GTV 9, Rohan has used the Clay Paky Alpha Spot HPE 1500 on such projects as The Footy Show Grand Final Special, Carols By Candlelight, This Is Your Life, TV Week Logie Awards and Million Dollar Drop.

“The Alpha Spot HPE 1500s are a great light,” he said. “They are bright, but that’s not the most important thing, the optics is sensational, the zoom range is great and the colours are consistent. The CTO wheel is particularly good and manages to remove the ‘green’ spike that their competitors have been unable to achieve.”

Rohan recently used the Clay Paky Sharpy on Million Dollar Drop. Sixteen of the units were supplied through lighting hire company Resolution X and were used as a beam light that Rohan reports was able to cut through anything: “The Sharpy comes with a good selection of colours and gobos,” he added. “Best of all they are unbelievably fast. They have a ‘mirror-like’ speed combined with the organic elements of a moving head!”