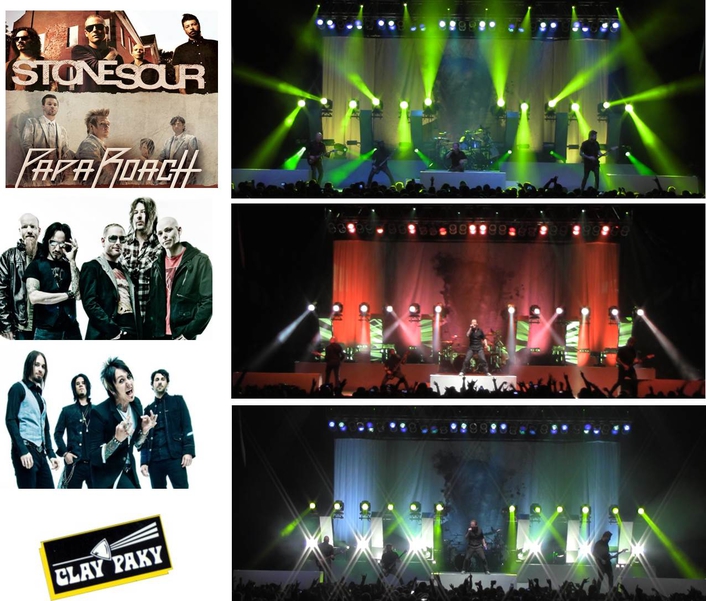 The bands began their tour in Europe last year, are currently playing dates across the U.S. and will finish in Australia.  Stone Sour released its fourth album, “House of Gold & Bones – Part 1,” last fall and Papa Roach is hot off its eighth studio record, “The Connection.”

Lighting designer/programmer/operator Michael Smalley was a fan of the Alpha Beam 700 from the last tour he did for electronic musician Bassnectar.  “I love the fixtures.  They’re a really punchy light,” he says.

Clay Paky’s Alpha Beam 700 was the first and original 700W beam moving light on the market.  It was conceived as an automated ACL to create parallel light beams, visible even in the brightest scenes.  Its small, lightweight, quick-moving body contains the most advanced technology for generating a bright beam that can be colored and shaped as desired for amazing dynamic mid-air effects and other innovative options.

For the Stone Sour-Papa Roach tour Smalley is working with a “really clean stage with no backline – a big, white backdrop that communicates with color and patterns.”  He has positioned 12 Alpha Beam 700s on six towers, the tallest points of the ground rig.

“They give an upstage washy look, a new school techno approach,” he says.  “I like to do geometric patterns, and the Alphas are really capable of finishing out those lines.  They provide the geometry of the look.”

Smalley reports that the Clay Paky fixtures are working well on the road.  “They have a tight, narrow beam, a nice soft frost filter and the color mix is really flexible – like a photon torpedo,” he says.  “They’re great!”

Francesco Romagnoli, Clay Paky Area Manager for North and Latin America, adds, “this is a very interesting tour and the Alpha Beam 700 is the perfect light for it.  I’m glad that Mr. Smalley had gotten such great effects from them.”