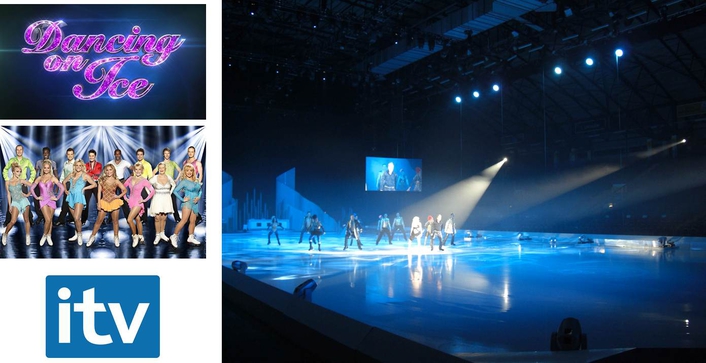 We position Alpha Spot HPE 300s around the Ice and light them from above with Alpha Beam 700s
Clay Paky’s world-class lighting fixtures are ‘Dancing on Ice’ at Britain’s biggest arenas this spring as the hit ITV show goes on tour. With skating legends Jayne Torvill and Christopher Dean headlining, the sixth live UK tour of Dancing On Ice is a sell out.

“Dancing on Ice is always a demanding tour,” explains Marenghi. “This year was no different. We have a tight ‘get in’ schedule and, on the request of technical manager Andy Gibbs, we’ve had to streamline the set up. One of the first things we did was dispense with the projection over the ice. Instead we now look to the lighting to provide the dynamic effects required for each skater’s piece. For me the Alpha HPE 1500 were the obvious replacement because they feature superb optics and wide range of gobos and effects. This allows me to ensure each skater’s act has a totally different look and feel from the others and better reflects the action on the ice. I also chose the Alpha Profiles to light the judges because of their accurate and repeatable shutter systems and unbeatable optics.”

This year Marenghi, who has created the lighting for the Dancing on Ice tour since 2008, will see the show go into Newcastle’s Metro Radio Arena, London’s Wembley Arena, Manchester Arena, Nottingham’s Capital FM Arena, Sheffield’s Motorpoint Arena, the Birmingham NIA, the Echo Arena in Liverpool and Glasgow’s SECC. However at each venue the ice rinks are considerably larger than those used for the TV show.

This means that one of the main considerations for the health and safety of the skaters, who are making the transition from the small rink in the TV studio to the vast expanse of an Arena, is to ensure that the boundaries are visible. Marenghi explains: “We position Alpha Spot HPE 300s around the Ice and light them from above with Alpha Beam 700s. It’s a great look and easily spotted by the fast moving celebrities who are travelling across the ice at much greater speeds than they're used to. This is primarily because there is a greater distances to cover – after all no-one is going to slow the music down for them!”

Durham Marenghi’s has lit some of the most spectacular events of the last decade. Since 2004 he has taken care of the New Year's Eve Light and Fireworks Show from the London Eye. In 2006 he was the first British LD to light an Olympic event when he designed lighting for the Opening and Closing Ceremonies of the Winter Olympics and Paralympics in Turin. More recently he was appointed lighting designer for The Diamond Jubilee Concert, which takes place in June this year so, as he suggests: “Watch out for the rather special Alpha Spot QWO 800 floor lights!”

“As ever we are delighted that Durham has chosen to use Clay Paky fixtures to realise his ambitious lighting design for Dancing on Ice,” says Pio Nahum, chief commercial officer for Clay Paky. “Durham has been a keen user of our fixtures for some years now and creates stunning lighting designs that fully exploit the extensive feature set and projection capability of the entire range.”