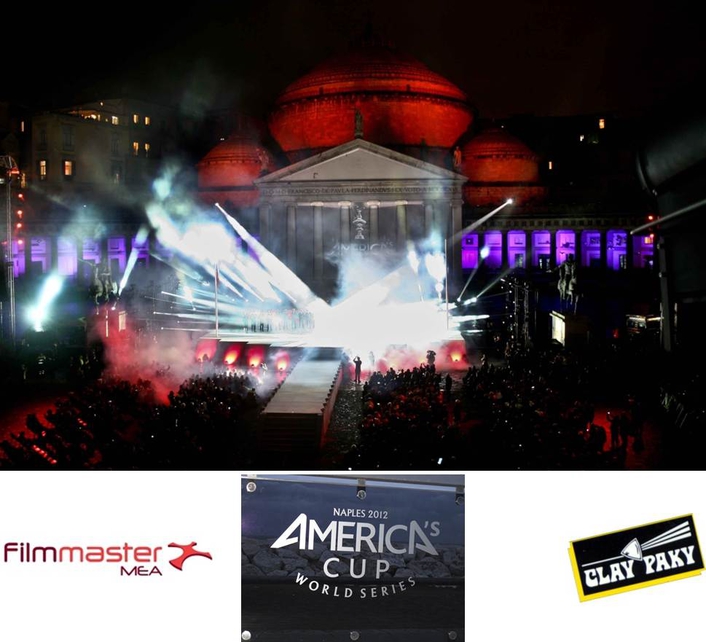 The AC World Series allows teams and their sailors to prepare for the Louis Vuitton Cup, the Defender Selection Series (if necessary) and the finals of the America's Cup. At the same time, the various events are designed to bring the America's Cup to fans around the globe, giving thousands of people the opportunity to follow the action close up.

The ceremony in Piazza del Plebiscito took the form of a spectacular party and played host to a series of live music and dance acts. Filmaster Event's organization ensured a quality occasion. This well known production company was responsible for the success of the ceremonies at the Olympics in Turin, the launch of the new Fiat 500, the bicentenary of Mexico's independence, 20 years of Turkmenistan, the Commonwealth Games, the Mediterranean Games and the UEFA European Football Championship.

The great guru and creative director of the company Marco Balich decided to entrust the ceremony lighting to the Lighting Designer Emiliano Morgia. Linda Castelli and the director Marco Boarino completed the creative team. 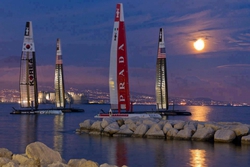 Emiliano Morgia told us: "We had to illuminate and enhance the presentation of the sailing teams on stage, which was preceded by a very impressive theatrical performance.One peculiar feature of the stage was the absence of roofing to allow 3D projections. We therefore had to light the stage adequately and minimize all visible structures according to the 3D mapping carried out by Clonwerk."

"I had to mount the front lights 35 metres from the stage. I therefore had to choose suitable moving heads, able to cover the distance without losing too much brightness. I chose 50 Clay Paky Alpha Profile 1500s, both for their high luminous efficiency, and because I wanted to “frame” the scene as much as possible. I used the framing system features to pick out the areas to be lit perfectly and mark out the stage accurately from the rest of the Piazza."

Emiliano Morgia told us that Clay Paky lights always add value, not just owing to the highly versatile optics and gobo projection options, but "their reliability and versatility of use are also a guarantee. Clay Paky does not just sell a product. Its success is also due to the people behind the products themselves. I was lucky enough to visit the Seriate site in person. When you are there, you can feel the great gusto they put into everything they do."

The lighting equipment also included 24 Alpha Beam 1500s and 14 Alpha Beam 700s, which were used to create effects that were particularly useful for emphasizing the important moments of the evening. The Piazza and the audience were illuminated with washlights. "It was particularly hard to illuminate the entire Piazza and not just the stage itself. The concept was to cover 360°. I wanted everyone to feel immersed in a "sea of light", since the event was all about the sea ...!"

The lighting equipment was provided by Agorà.

After Venice and Naples, the World Series America's Cup will cross the ocean in August, and arrive in San Francisco. This will give rise to a calendar of races for the exclusive benefit of sailors, fans, teams and all those concerned.