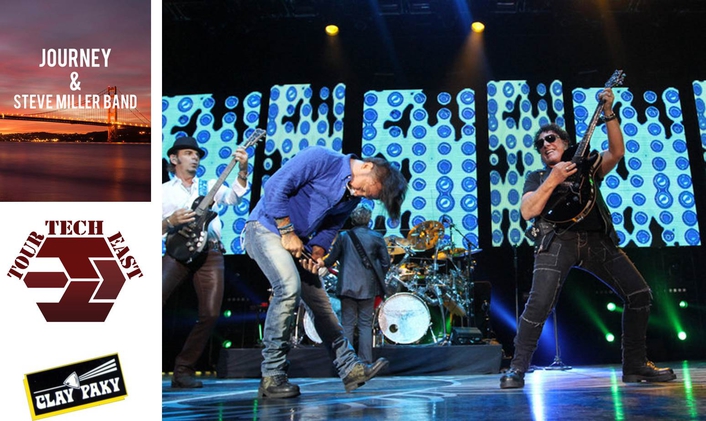 Clay Paky Sharpys illuminated the Journey and the Steve Miller Band along for the ride that took them to 30 cities across the U.S. and Canada.

“Last year Deuce used a couple of Sharpys, but this year he specifically wanted Sharpy Washes for the tour so we added them to our inventory,” says Ploss.  “We’ve made a significant investment in the Clay Paky fixtures.”  Sharpys are very popular with Tour Tech customers for their output, size and low power consumption.  Fixtures are currently out with Styx and Foreigner, and the Calgary Stampede deployed a large number for its famed rodeo.

Deuce, who has been lighting designer for Journey since 2004, says he “probably doubled” the number of Sharpys in his new tour rig.  “There are 12 on the side trusses and four each per overhead truss for a total of 12 more.  Plus one each on ten US Towers that top a wall of 20 Sharpy Washes,” he explains.  “A video display, comprised of PRG/Nocturne V-28 and V-9 LED panels, is directly behind the band above the towers.  It looks like there’s a wall of light with the video display resting on top.” 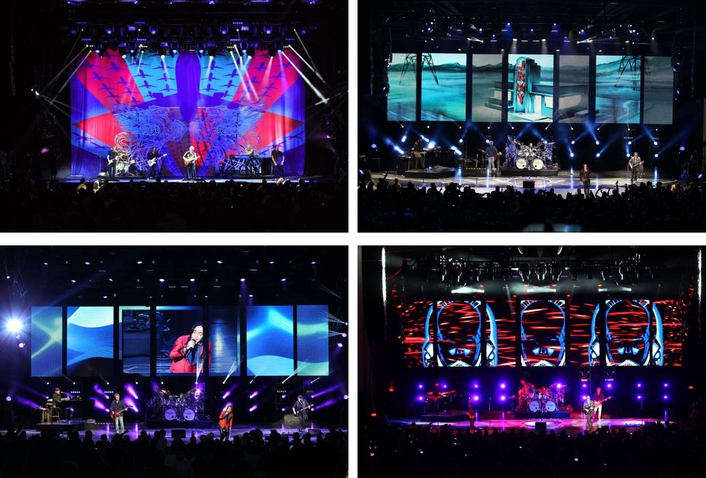 He says he “wanted to do something a bit different” in creating an interesting background for the band, “but the budget didn’t call for elaborate custom sets.  So Tour Tech helped me deliver the desired effect without going custom.”

Tour Tech fulfilled Deuce’s idea of using black A-Type, 30x30-inch x 8-foot truss turned upright on casters.  “At the bottom of each bay there is a wooden insert.  Each Sharpy fixture is placed on the insert – all of the fixtures actually sit in the truss and none on top,” says Deuce.  “Using the truss as set pieces housing the lights allows us to have a tidy pack in the truck, ease of placement and removal from stage, and convenient movement for set changes with our three-band bill.”

The Sharpy Washes enable him to “go from a very narrow beam for nice graphic geometry to a wide beam for a silhouette look on the band and wash out in the audience.”  Their light output also had to be able to stand out against the video display.

The Steve Miller Band’s lighting designer, Andrew Richter of IOD Group in New York, has used Sharpys and Sharpy Washes “extensively” the last two years.  “The pure power from such a fast and compact fixture makes it ideal for all but long-throw, wide-beam applications.  I prefer the Washes in a mid-stage position for our non-shared rig due to their speed and depth of color rendering.” 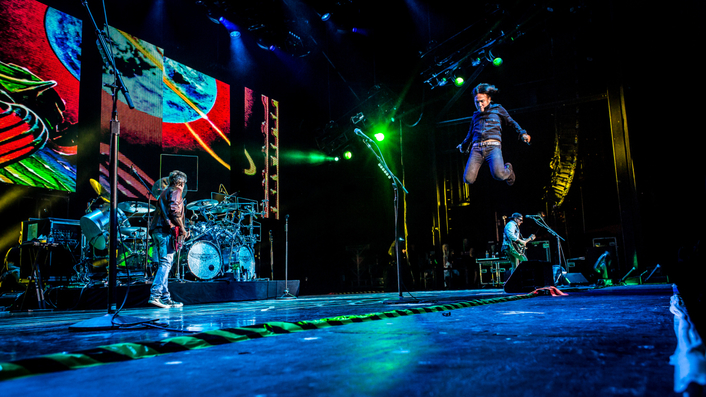 The scenic design for the band calls for Richter to block off the Sharpy Washes on the rear lower truss with a fiber optic drop and a full stage drop designed by Stanley Meyers for “Jet Airliner” in which the Sharpys play a key role.

“The ‘Jet Airliner’ stage drop consists of a large central jet aircraft pointing upward with layers of smaller aircraft in a Japanese rising sun homage,” Richter explains.  “I really wanted to create a sense of the jet in motion.  My long-time colleague/programmer Scott McCowan and I worked on several different intensity chases and color bumps to a less than desirable effect. Ultimately, we thought of the old anime/manga ‘speed racer,’ where the primary subject is stationary and the windows show movement quickly zipping by.”

They achieved a similar effect by deploying Sharpys from a side position so they “graze the drop with the imagery of lines of clouds zipping downward past the static aircraft wings and fuselage creating movement,” he says.  “It's the perfect synergy of the right light and brilliant programming to create the vision I wanted without video, without animation wheels but using purely the speed and position recall accuracy that only a Sharpy can deliver.”

"I've had the pleasure of working with Deuce over his last few Journey tours - he's always thinking of new ways to bring their performance to life for the audience.  I knew the Sharpy Wash would be a nice addition for them and I was very excited that he liked it so much.  Tracey and the Tour Tech East team are also great to work with, so the entire project has been a pleasure for A.C.T,” commented A.C.T Vice President, Automated Lighting, George Masek. 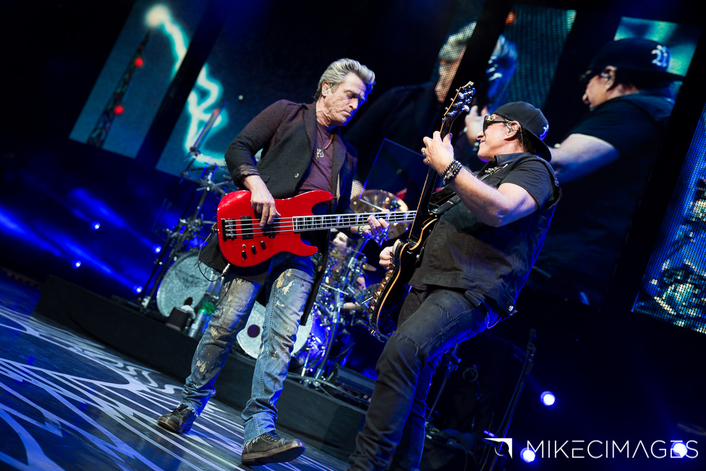 Francesco Romagnoli, Clay Paky Area Manager for North and Latin America, commented, “This is a very ambitious and impressive tour and both designers are doing a great job at deploying our fixtures to their fullest.”