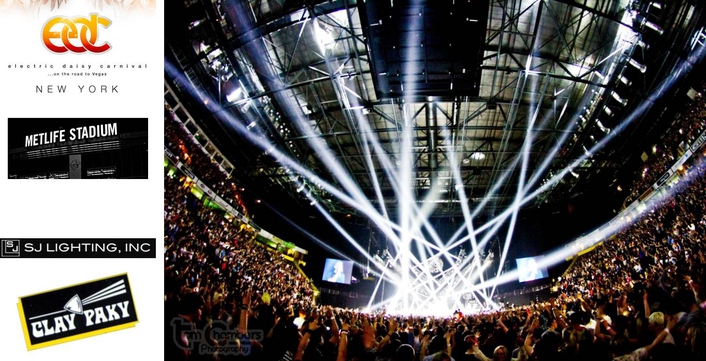 Now a three-day event, the roving EDC has become the largest electronic dance music festival in North America.  Lighting and video are set up to run live all night and the visuals and stage designs are critical components of the audience experience. Upwards of 45,000 people were reported to have attended the event just outside New York City.

“For this show the design philosophy was ‘Go big!’  Big structure, big lighting, big video,” says Lieberman, who deployed a large Clay Paky inventory at last year’s EDC in Las Vegas.  “All the moving lights on the main stage were Clay Paky, and they were used for everything from lighting the stage to creating visual looks for the audience.”

Despite some weather issues that slowed things down, Lieberman’s crew “muscled through” the event and performed “at the highest level,” he reports.  As for his Clay Paky inventory, there were “no issues at all – that’s why they continually get spec’d on my shows,” he says.

I love their optics and advanced feature set. The new Shotlights presented a great opportunity: I was able to strobe the stage looks whereas, typically, my strobe details are pointed into the audience.”

Francesco Romagnoli, Clay Paky Area Manager for North and Latin America, adds, “We’re pleased to see that we are providing such a wide range of lights to Mr. Lieberman. He is a great designer and producer and one of the first users of our new Shotlight. We look forward to working with him on future projects”.