2011 saw the largest live audience in attendance in Eurovision history at 36,000 strong and 200 million TV & Internet viewers
Clay Paky delivered the majority of winning looks with over 300 automated luminaires at the 56th Eurovision Song Contest held in Düsseldorf, Germany on May 10, 12 and 14, 2011. The legendary production continues to grow every year and 2011 was no exception, with the show breaking several of its own currently held records.

2011 saw the largest live audience in attendance in Eurovision history at 36,000 strong and an estimated 200 million television and internet viewers, making it the largest music television program in the world. This year also tied the record for most participating countries – 43 – and seeing the return of Italy to the contest after a 14-year hiatus. In terms of lighting equipment, this year had the heaviest roof load and the highest number of lighting fixtures in the show’s history with over 5600 total. 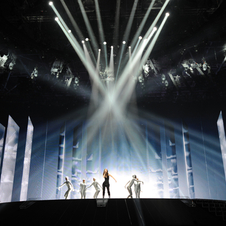 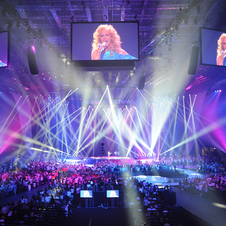 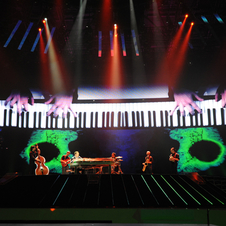 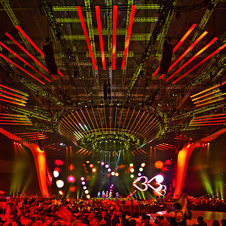 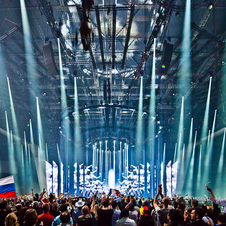 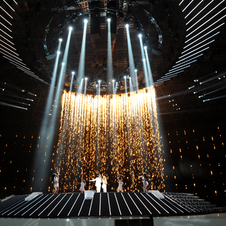 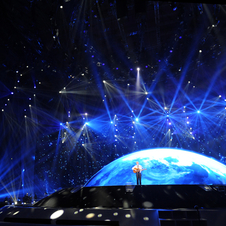 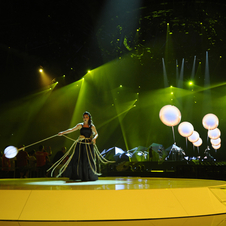 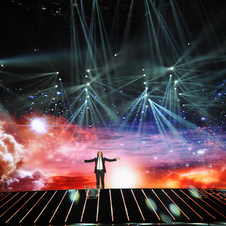 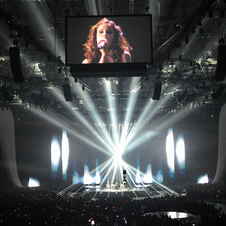 Germany was instantly excited about hosting Eurovision (having not played host to the contest since 1983) when the country’s darling, Lena Meyer-Landrut was crowned winner with 246 points for her smash sensation “Satellite” last year in Norway. Lena returned to the contest this year to defend her title with her newest hit “Taken By a Stranger”. 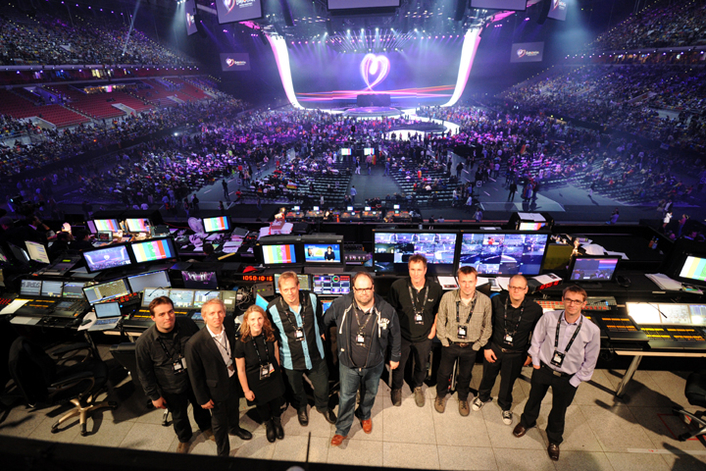 Jerry Appelt and his team

Lighting Designer Jerry Appelt, known for large-scale events in music, TV, industry, art and architecture, included over 2100 moving lights for the massive Düsseldorf Arena, of which over 300 were Clay Paky fixtures used primarily for the stage area. No stranger to big effects, Appelt created a completely new and exciting design for all 43 songs, plus three interval acts and an opening to the Final – a challenging undertaking. The rig extended to every square metre of the arena and was carefully chosen by Appelt in order to handle the wide assortment of looks needed.

A moving truss structure consisting of three graduated rings of 10, 16 and 30 metres diameter was centered approximately 20 metres above the stage. The rings held 35 Clay Paky Alpha Wash 1500, 16 Alpha Beam 1500 and 8 Alpha Profile 1500 fixtures, creating a sea of bright beams to the stage below.

26 moving truss sections were arranged like spokes from the centre rings. These truss sections held an additional 28 Alpha Wash 1500 and 36 Alpha Beam 1500 with four shorter truss sections holding 24 Alpha Spot 700 HPE fixtures. At floor level, both behind the stage and on each side were 24 Alpha Beam 1500 fixtures lending powerful effects to match the brilliance over the stage. 25 Clay Paky Sharpy fixtures were placed on the floor surrounding the front of the stage, specified for only one song – Lena’s song for Germany.

Appelt explained, “The design included a variety of Clay Paky fixtures that could combine to create so many fantastic looks. And I know the colour will match perfectly. They put out brilliant light, they’re fast and incredibly reliable.”

“I particularly like the [Alpha Spot 1500] HPE because it does so many things so well. I love the Sharpy too, although those were specified for one song only – Germany. I wanted a very special look for Lena. And of course the Alpha Beam 1500s are great too. I put them on the floor around the stage and they put out some powerful effects. The arena was huge and it was needed. I’d be very happy to have an all Clay Paky rig.”

Cape Cross of Köln, Germany provided all lighting and rigging for the show, sending 90 trailer trucks, each with 40 tons of equipment. Thomas Brügge, Managing Director of Cape Cross said of the Clay Paky fixtures, “They’re quite amazing – the light is brilliant and they’re so fast. But very important to us is the reliability. The maintenance is fantastic.”

Concert and Stage Producer Ola Melzig worked closely with the delegations and artists during initial preparations and rehearsals for the show. Melzig said, “The feedback regarding the lighting was consistently one of amazement – everyone was extremely happy with Jerry’s work and the brightness and quality of the lighting. They were also pleased with the unique look of each song. No one wants to look like the next. I personally think the Clay Paky lights were a fantastic choice and the crew was really happy with the low maintenance.”

“This was one of the smoothest Eurovision productions I’ve experienced,” said Melzig, “and it was the biggest. Every aspect of the show was chosen and executed to its fullest potential and it showed.”

After all the votes were tallied, Azerbaijan was crowned champion with the song “Running Scared”, which means Eurovision will be held in Baku, Azerbaijan in 2012. We’ll see what surprises next year will bring.