.
The Eurovision Song Contest recently completed its 57th year, held at The Baku Crystal Hall in Azerbaijan, a brand new multi-purpose indoor arena with a capacity of 23.000 spectators. The Baku Crystal Hall was commissioned by the City of Baku specifically for this event and construction was completed in a mere eight months. A perfect venue to host Eurovision, that continues to captivate audiences worldwide and its fans are proof of this.

The event makes news every year with respect to both its technical achievements as well as for its broad and colourful spectrum of musical performances.

Baku hosted 42 participating countries spanning three live broadcasts – two Semi-finals on May 22nd and 24th and the Finals on May 26th. The 2012 Finals had a live viewing audience of 23.000 plus an estimated 125 million television and internet viewers worldwide, making it the largest music television program in the world.

German Lighting Designer Jerry Appelt specified a spectacular arsenal of lighting for the magnificent, brand new arena. More than 1.400 moving lights (2.891 fixtures total) allowed the 42 contestants, plus an elaborate interval act and opening performance, to have a completely unique look during the overall 7-hour broadcasts. 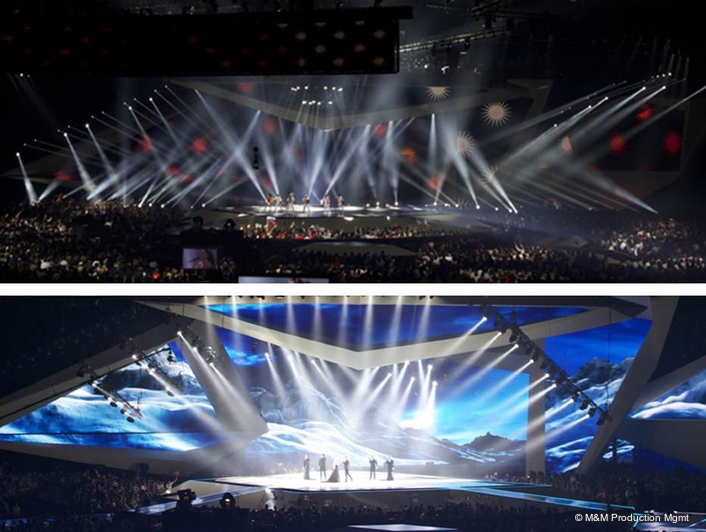 The overall goal of the lighting design was to mimic and compliment the architectural design created by Stage Designer Florian Wieder. Of the 1.400-plus moving heads, 667 were Clay Paky. They were primarily used around and above the stage, outlining the stage elements and being the main focus in camera shots. “The stage design was much more angular than in the past and I wanted the lights to make these features stand out,” said Appelt. 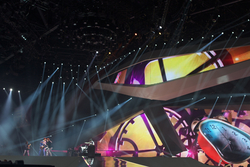 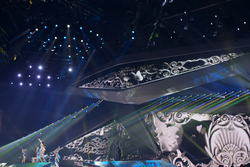 One lighting element new to the Eurovision stage this year was the Parasol KLR (Kinetic Light Ring) system, originally displayed on Clay Paky’s stand during LDI 2011. The Parasol system, which hung directly over the stage, allows moving lights to move along a fixed path on a linear or curved truss. The system in Baku consisted of three concentric rings with circular motion, all lit with Alpha Beam 1500s, with their independent and simultaneous motion over the stage for a dynamic effect. 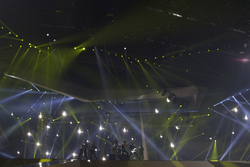 A big challenge for the crew was that this show was the very first event ever in the new arena. Appelt added, “We were also dealing with a lower trim height – only 16 metres compared to last year’s 30. That posed some new design challenges as well.”

“Having an all Clay Paky rig just makes the process so smooth – all the colours work perfectly together and you know what to expect from the lights. There’s a fixture for every need and always plenty of new stunning effects. Consistency is key.” 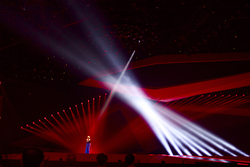 An interesting application of the Clay Paky fixtures came in the form of 6 Alpha Beam 1500s, which were used as follow spots for the back truss. The fixtures were modified to meet the requirements of follow spot operators, by adding a handle and removing the automated yoke. Appelt explained, “These were great for targeting and colour bumping. Maybe we created something new for Clay Paky!”

Total control for all lighting and video came from 8 x grandMA2 full-size consoles, as well as 5 x grandMA2 faderwings, triggered via timecode. 11 x MA NPU (Network Processing Unit) devices handled all traffic in one session on the MA-Net2. Lightpower, exclusive Clay Paky distributor in Germany, did technical support for the MA system. 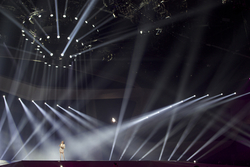 Cape Cross of Cologne, Germany provided all lighting and rigging for the show. Thomas Brügge, Managing Director of Cape Cross said, “Clay Paky is a very popular brand for us. The fixtures are reliable and consistent.”

Concert and Stage Producer Ola Melzig consulted with the delegations and artists regarding the details of each performance including lighting, video, pyro, sound and camera angles. “There’s a good reason Jerry is loyal to Clay Paky. I watch most of the rehearsals and shows on a professional HD monitor and the camera loves these fixtures. The colour is harmonious, consistent, bright and very effective.”

Final results of the competition put Sweden as 2012 champion with the song “Euphoria” by Loreen. 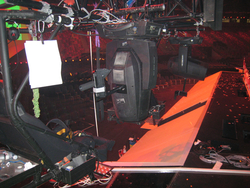