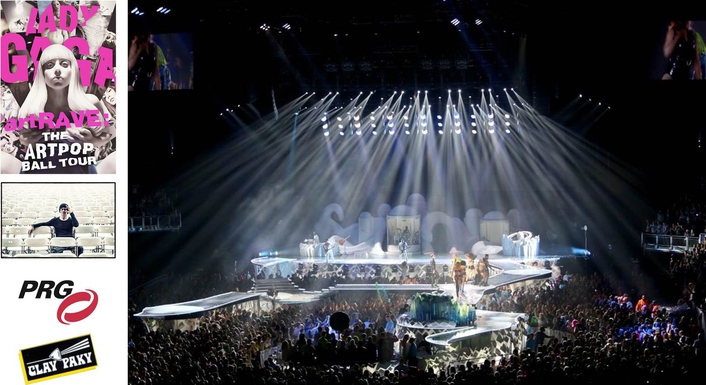 Bennett uses huge banks of A.leda B-EYE K20s and Sharpys to light the huge set to deliver a wealth of vibrant, multi layered, multi-faceted and lively looks. Supported by lighting director Whitney Hoversten, who has taken the show on the road, Bennett specified 107 x Clay Paky B-EYEs and 83 x Sharpys, all supplied by PRG, to create the show’s high octane, rave style atmosphere.

“My first thought when it came to creating the rave style concept was that the audience has to be fully immersed in the show and become part of it,” says Bennett. “I chose the Clay Paky B-EYEs for their versatility and unique personality, they are the icing on the cake tools that add all the detail.”

Indeed each and every look is intricately matched to the accents of GaGa’s chart-topping tracks. Bennett uses the B-EYEs in so many ways that it’s sometimes hard to believe that the same light is delivering so many looks. From hundreds of super sharp pin thin dancing beams to penetrating washes, flashing coloured strobing to graphic effects that swipe across numerous banks of fixtures; Bennett punctuates almost every musical note and phrase with agile imagination and precision programming.

“LeRoy loves to break down every little nuance in the music, he has an amazing ear,” explains Hoversten. “Having a fixture like the B-EYE gave him countless creative ideas and has allowed him to explore some remarkably fresh new looks. It’s fantastic to have individual control of each of the cells. Every single one can be a different colour, or we can divide each fixture in half and have one half doing the snare beat and one half doing the bass beat. It’s so cool.”

In fact Bennett’s design sees the B-EYEs used in a multitude of ways including rigging them in large clusters overhead and combining them in a 72 strong ‘mega pod’ to create one huge light or low res graphics screen, which sits above the high resolution, stage wide video screen upstage.

“When LeRoy told Lady GaGa about the fixtures, she was as excited as him, so we knew we needed a prominent place for them in the rig. The mega pod of B-EYEs is by far the signature look of the show, so much so that even where we weren’t doing full production we still brought the mega pod with us. I can’t imagine this show without it,” continues Hoversten.

In addition and augmenting the B-Eyes, Clay Paky Sharpys make up an integral part of the design, with Bennett and Hoversten employing them to create some dazzling aerial effects across the expansive set and reaching out into the audience. 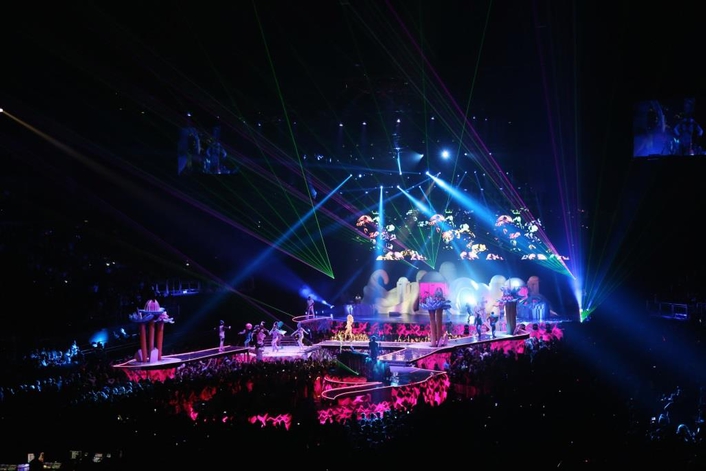 “We build a lot of our looks around the Sharpys,” says Hoversten. “Like the B-EYEs, there are so many different ways that we can use them to highlight and emphasise the music. They’re fast and bright and LeRoy really makes them dance. One of my favourite looks is when there’s a big drum roll at the end of the song ‘Gypsy’. The Sharpys start to shake along with it and then they fly out into the audience before pausing on the last snare hit, going from a very fine beam to a frosted wash. The whole move corresponds exactly with everything that’s going on on-stage and in the music. For LeRoy it’s all about executing perfect visual looks that match up to the songs. The Clay Paky fixtures have enabled us to do exactly that.”