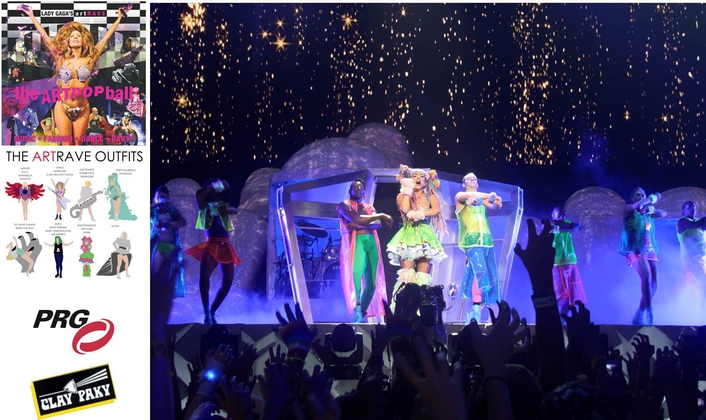 .
Lady Gaga has launched her tour, ArtRave: The Artpop Ball, and Clay Paky’s A.leda B-EYE K20 innovative, LED-based moving lights and Clay Paky Sharpys are along for the wild ride.

ArtRave marks Lady Gaga’s fourth concert tour.  It is in support of her third studio album, “Artpop” and kicked off May 4 in Fort Lauderdale.  It will play 78 dates in North America, Europe, Oceania and Asia.

PRG has provided 120 B-EYEs for the tour as well as a large complement of Clay Paky Sharpys.  Lighting control is performed with three full-size grandMA2s and 10 NPUs.

“Production and lighting designer Roy Bennett’s approach to the show was to make it an immersive rave that reflected Gaga's non-stop party aesthetic,” says programmer Jason Baeri.  “That means active, alive, vibrant and high energy -- it requires us to be just as active on stage as in the crowd.  The audience is every bit as much a set piece as they are a room of spectators, so we had to include them as part of Gaga’s same party not just watching the spectacle from afar.  Cue wise, that's almost like programming two shows at once: Both had to behave as one cohesive element.” 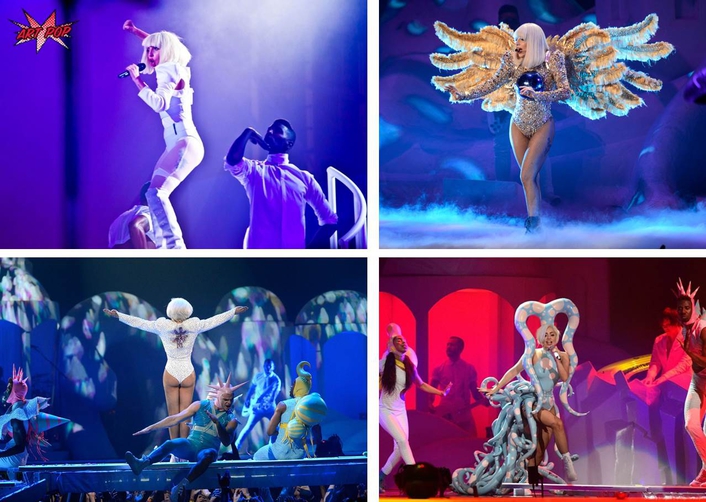 Bennett describes the set as three stages connected by Lucite catwalks over the audience so the crowd can dance while watching Gaga perform above them.  “It’s very interactive.  She plays off the audience with her dancing and a big rave vibe,” he says.  Bennett had previously used B-EYEs for Lady Gaga’s gig at the Roseland Ballroom.  On this tour they are mounted above the upstage video wall, which measures 3x40 feet.  “They mainly act as eye candy,” he explains.  “They’re working great; they’ve been very reliable.”

For the ArtRave tour the lighting designer has deployed the Sharpy rig “all over the place: the main stage, front, rear, side, as well as on the pods over the audience.  The Sharpys act as our other main effects light.  I always have at least 100 if not 200 hundred on shows.”

Baeri cites the data management challenge the tour poses given “the immense amount of pixels we’re controlling.  There are about 120 B-EYEs on the show, all in full-tilt mode, which adds up to over 4,500 pixels of just B-EYEs -- and we use them in every configuration possible.  Gaga’s music is extremely detailed, so we're using every part of that light for the various tones and inflections in every song.” 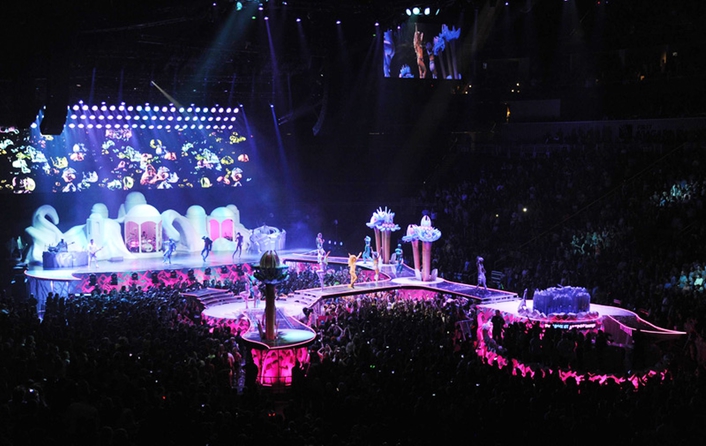 Francesco Romagnoli, Clay Paky Area Manager for North and Latin America, commented, “It’s great to once again be a part of a Lady Gaga project and it’s always a pleasure to work with the very talented Roy Bennett.  He and Jason are doing a great job on this tour.”