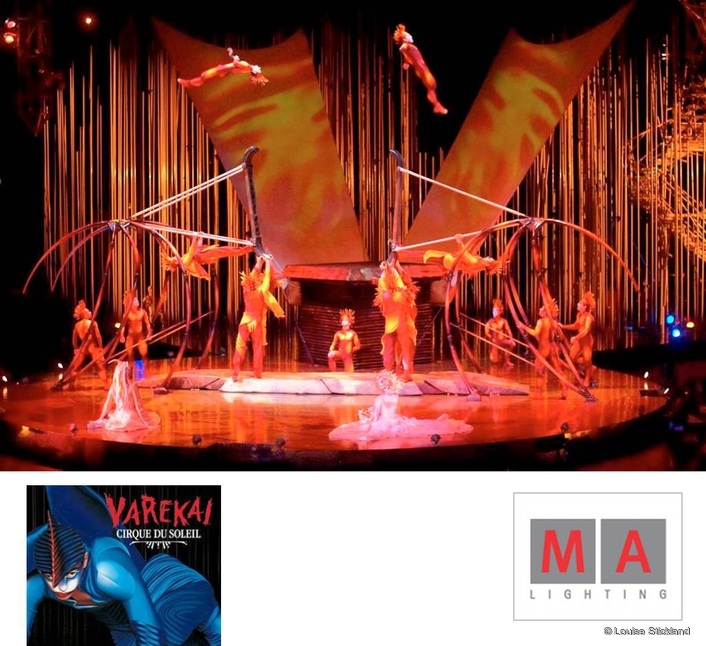 The decision to change to the latest lighting control technology was made by Varekai's Head of Lighting, Karl Jenkins. He says, "I think MA offers the best current solution for this type of show which is run live and changes every night". They also needed to change the consoles they were using, which had been onboard since the show first started touring seven years ago, so it was high time for an update and an upgrade. "The grandMA2 is an international control standard," confirms Jenkins, "And the idea is to introduce this platform across other Cirque shows".

The age of the previous desk also meant that most of the 400 plus show cues could not be easily translated, so much of the show had to be re-programmed and re-built from scratch on the grandMA2 light. It was transferred during their run in Cologne, Germany, with just three intense days in which to achieve their objective and be up and running seamlessly on the new console, for which they received technical support from Callum Howie out of MA Lighting's UK office.

Howie explains that the first day was spent inputting all the generic and scroller cues into the desk, entailing all the colour presets being copied in and then checked cue by cue. Dimmer Values and cue timings were imported from the original desk's ASCii files and rigorously checked as they continued the process. On the second day the moving light cues were input, for which they created blank presets and then referenced these in the cues.

On the final day all the presets were updated and the whole show was examined cue-by-cue, with any states needing to be tidied up dealt with - a task that was completed impressively - in about an hour. The cues were then further scrutinised in real time to ensure the transitions were completely accurate, including some very specific movement effects which took time and diligence to program. Finally, they wrote macros and links enabling Jenkins and his two show operators to jump around the stack depending on which acts are appearing that particular night. On that third evening, the show was run fully on the new grandMA2 light system, completing the three day transfer challenge.

Jenkins has been using grandMA consoles for the last six years, and so knows the architecture and philosophy well, which also underlined his confidence in recommending the change. He likes many features of the grandMA2 including the way it deals with presets. Each time the Varekai show's big top venue changes location, the preset focuses - which have to be extremely accurate to ensure the artists have the correct light in which to work - need updating.

He thinks the tracking functions and the fact that channels can be tracked right through the show are extremely good, as well as the auto-update facility, whereby any cue change is updated immediately across the network.

The show is operated in rotation by Jenkins, Istvan Fazekas and Jon Vivash, all of whom received training on the new console in situ in Cologne from Callum Howie. Jenkins describes MA's service and support as "Phenomenal", and this was another major reason they went with the leading lighting control brand, along with the 24 hour worldwide support and backup which is available if needed.