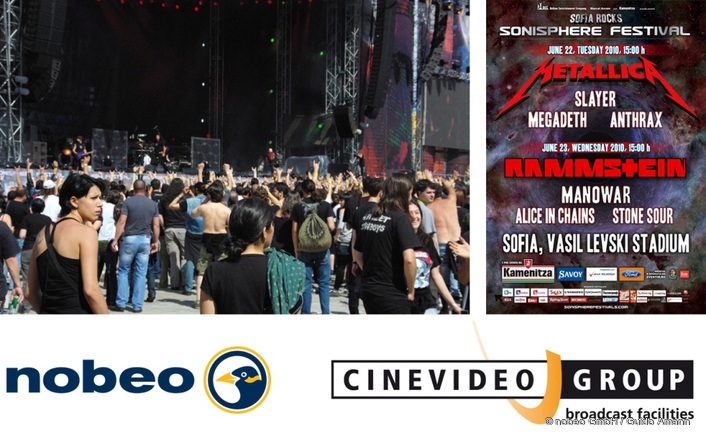 On the first day of the festival Metallica, Slayer, Megadeth and Anthrax were on the set list. These four legendary acts emerged from the thrash metal scene in the 80s and dominated the metal scene from thereon in. They sold millions of records and filled arenas around the globe. Despite the huge demand, these bands had never before performed together on the same stage.

This unique event was broadcast worldwide via satellite to 800 movie theatres. Germany was among the 34 countries where four exciting hours filled with live performances and backstage footage from the festival were shown. The mega-event "The Big Four: Metallica, Slayer, Megadeth, Anthrax" could be viewed live in HD on the big screen in 40 German cities.

In addition, on October 01st, 2010 a double-DVD and Blu-ray featuring the recordings of this unique event will be released. 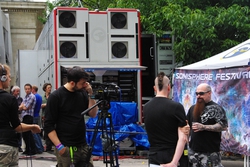 nobeo’s sister-company Cinevidegroup used the OB truck "nobeo 1" for the live broadcast and recording of the event. During production, a total of 15 GVG LDK 8000 cameras were used, including two on Jimmy Jib cranes, two on Panther dollies on a 30 m rail and two as Towercams.

The recording was achieved using five EVS XT HD2 systems on two EVS X-File Systems with DNXHD codec. Four six-channel EVS were used for the isolated recording of individual cameras and one served as a Broadcast / Edit EVS. In addition an HDCam SR VTR was in place as a backup. Interviews were recorded using an XDCam ENG-Camera.

The complete mix for all four bands was produced on the Lawo mc²66 in "nobeo 1" in 5.0 with approximately 140 DSP channels in use for the bands and using 50 channels for distribution and outboard systems. In the "Green Room" of the utility truck, a Yamaha DM 1000 Audio Mixing Console, connected in 5.1 via Madi, was used as a broadcasting- and editing mixer. 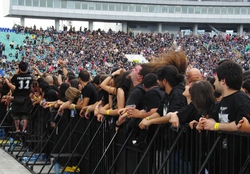 The multi-track recording was realised using Pyramix and Sequoia (Backup) which were connected with 64 channels via Madi. The mixing was done "read after write".

The EVS provided the broadcast signal in 5.0, which then ran through a Cinema Matrix Encoder (ProTools D002 with Aphex AES Interface) that processed the complete signal to 5.1 for all the cinemas. This 5.1-signal was distributed to four Dolby AC3 Encoders (DP569) which were present each as a master and backup in two SNGs (UK and U.S.). In the SNGs, the AC3 and HDSDI video were put together in a Tandberg E5788 HD DSNG Encoder were in addition the delay was adjusted. Then a MPEG4-signal was sent to the satellite.

The XDCam-ENG-material was adjusted to 5.0 on a Sound Field UMP-1 and fed to the Broadcast Mix.The AC-3 signal was finally returned to the "nobeo 1" and where it was monitored using a Teufel Decoder (Decoderstation 5).