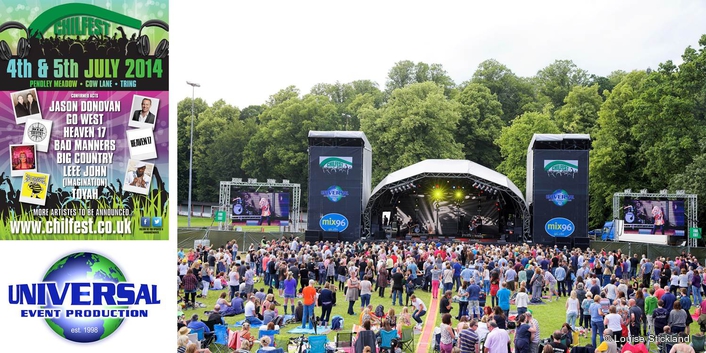 The event, compered by the legendary Keith “Cheggers” Chegwin brought two days of the very best music from the 1980s – indie rock from the Boomtown Rats, Big Country, Heaven 17, etc.; classic pop from Jason Donovan, Boney M, Go West – and contemporary pop with Union J, 911, Stooshi and many more to the leafy heartlands of Tring.

Chilfest was started last year initially as a novel and interesting way of celebrating UEP’s 15th year of successful operation. As the idea gained momentum, it took on the format of a full scale two day music based festival with fun and entertainment for all the family. 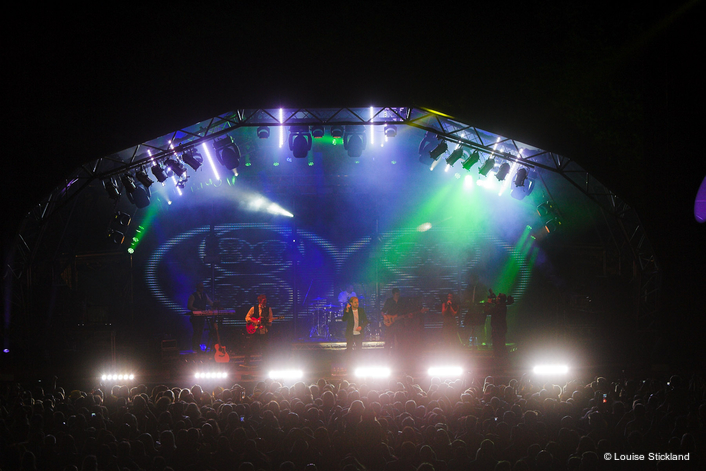 The Chilfest event and concept went down such a storm that Steve Butcher and his team decided to go ahead and do it again, building on their knowledge and presenting an even bigger and better experience for their audience in 2014.

This year they expanded the schedule – adding one day - together with a larger stage, a rolling riser system to optimise the changeover times and some special new features including widening the whole presentation space in the lush and leafy green environs of Pendley Meadow, Tring. 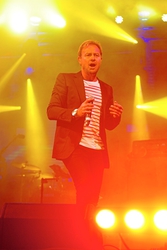 Says Butcher, “We were all delighted with this year’s results. We had a trouble free event and brought new standards of excellence and production values to a truly boutique festival setting that you would normally only expect on much larger shows”.

Site and Stage Manager Andy Nurse was one of the key figures in Butcher’s core production team. Nurse also designed the audio system in conjunction with Hugh Jones from audio rental company HPSS and his company Production Element dealt with all the artists’ liaison, dressing rooms, riders and artists’ backstage requirements.

The stage was supplied by Trust Events, rigging came from Letchworth-based Production Plus and the event rigger was Eddie Singer.

Lighting
A production lighting design was created by Simon Maddison. The brief was to provide a good and practical house system with the flexibility and dynamics to cover all artists playing, providing a host of interesting looks and scenes … with plenty of headroom.

It was essential that the lighting also worked well for daylight as the majority of the action took place when it was light!

To maximise every possible centimetre of the 15 metre Orbit-style stage, they shaped two of the sub-hung lighting trusses to the curvature of the roof, with the ends of these further extended with scaff pipes, giving some mid-level side fill fixture positions.

With six or seven bands on each day  .. the floor area was left completely clear of lighting.

A straight truss at the back held the 10 x 4 metre Glux 12 LED screen, and this covered the whole upstage area. Immediately in front of that were four vertical scaff bars on tank traps and also secured to the trussing above for additional stability, each rigged with three Robe ROBIN Pointes. These were ideal for producing upstage matrix style lighting effects.

Other fixtures dotted over the trusses were 24 x Robe LEDBeam 100s, eight Robe LEDWash 300s and four LEDWash 600s – the small size of these was ideal for fitting the space. There were also 12 x Clay Paky A.leda K10 LED washes and 12 x Miltech LED battens plus – a quick salute to lighting of the 1980s - two bars of 6 PARs at the front for very basic stage washes. 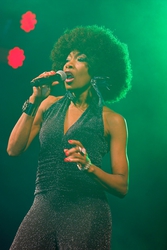 Six SGM Sixpack pixel blinders were installed downstage and used for audience illumination and 10 of UEP’s new SGM XL5 RGB LED strobes were rigged above and used for classic strobe effects as well as floods, proving their excellence at both applications!

On top of the PA towers each side were six CP Sharpies and these were used for shooting beam effects into the crowd, which ramped up the excitement levels and everyone loved.

Four of SGM’s new high powered G-Spot profiles were placed on the PA wings either side of stage to boost low level front lighting across the crowd, which was also a great atmosphere builder.

All of the most exposed fixtures on the front of the stage and wings were IP65 rated, which proved helpful as the weather was typically erratic, serving up a mixture of sunny spells and showers, but whatever this happened to be … nothing dampened the incredible Chilfest spirit.

Two Robert Julian Korrigan follow spots were provided at FOH and the house lighting desk was a ChamSys MQ Expert with an Executive Wing.

Video and Visuals
UEP supplied a full IMAG and visuals package which was co-ordinated by Pacey Prestage (Visuals and VJ’ing) and Mike Kane (cameras and LED screens).

The playback visuals were created by Prestage using a collage of library footage and some custom created Chilfest content, all played back using 8 layers on an ArKaos media server. This was triggered via another ChamSys console and fed to the upstage Glux screen.

Having the screen at the back of stage was invaluable in ensuring that the stage looked good whatever the light levels and time of day as well as adding another full layer of depth to the performance space.

The camera package from UEP featured six Sony units, three stationed at FOH and three at the stage end – one on track in the pit; one hand-held onstage and a hot-head mounted directly above the stage.

The camera feeds were all sent to a Roland V800 HD mixer and cut by Kane and Jay Martinez sitting at the FOH position. They used a Roland V40 HD for scaling the various content to the two IMAG screens, which were 5 metres wide by 3.5 high and made from Barco 7mm product. 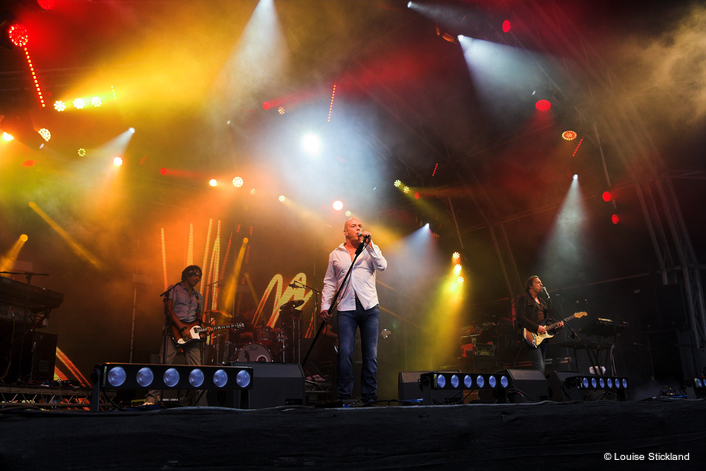 The main hangs comprised 15 x KARA speakers a side, run with three SB18s and eight SB218 subs a side, all ground stacked and run in cardioid mode for better control and focusing of the noise.

ARCS wides were used for front fills and all the speakers were driven by L-Acoustics’ LA8 amps.

The system produced a really fabulous, crisp clean image all around the arena and a lively robust sound that was loud and very comfortable.

Due to the 10 minute changeovers two complete A and B systems were run in flip-flop mode, routed to the speaker arrays via a Midas PRO 2 console stationed at the amps side-stage. So when visiting engineers arrived … all they had to do was deal with their own elements on the consoles.

At FOH, Steve Bull and Ben Dexter ensured that everything ran smoothly on two Avid profile consoles and Bull mixed those bands without their own engineers.

To keep everything strictly on time, as one band played the next was behind the onstage LED screens on the rolling risers completing a full line-check. As soon as the performing band finished, the ‘new’ risers were wheeled out fully loaded with their backline, and everything switched to the other system. A super-quick basic line check ensued … and they were ready to go.

There were no environmental limits set for the FOH area, but at the nearest residence the limit was 65dB. A tribute to the system design was that at full-tilt and with plenty of presence and air movement … it ran at  63dB!

The Yamaha monitor consoles - a PM5D and a CL5 - were looked after by James Tossell and Jamie Reed. They used 14 x L-Acoustics HiQ115 wedges all driven by LA8s, together with a couple of drum subs on wheels, and Shure and Sennheiser wireless systems were also available.

It was due to the more complex system set up and increased backstage activity that the stage was increased in size this year. Last year they had had one ‘house’ band which had backed most of the singers. 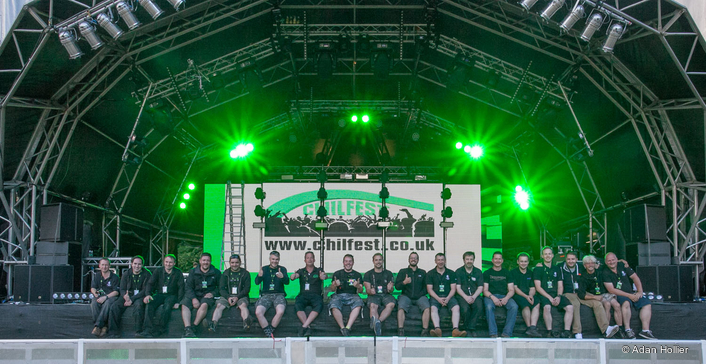 Steve Butcher concludes, “I am extremely proud of what we have achieved again – and I appreciate the truly amazing team of people I am lucky enough to work with. Everyone has worked very hard, and paid a lot of attention to detail and our collective reward was to deliver another great event that was enjoyed by over 11,500 people.”

“Hats off in particular to Andy Nurse who is one of the most talented and skilled Stage Managers around. We have all known about his technical competence but his political and communication skills really came to the fore and impressed everyone”.