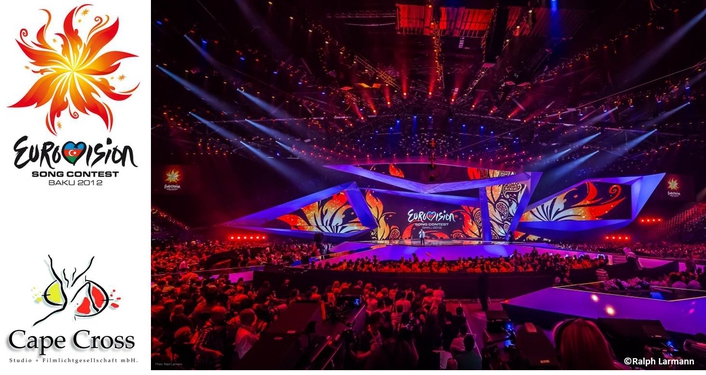 .
Cape Cross Studio + Filmlicht GmbH of Cologne, Germany once again supplied the technical equipment for the Eurovision Song Contest 2012, held at the 23,000-seat Baku Crystal Hall in Azerbaijan. The long list contained all lighting, truss and control desks with nearly 3000 lighting fixtures on the roster and full support of all equipment.

Eurovision 2012 consisted of three live broadcasts – Semi-finals 1 and 2 on May 22nd and 24th and the Finals on May 26th. The show is an annual competition held among active member countries of the European Broadcasting Union (EBU). Each member country submits a song to be performed on live television and then casts votes for the other countries' songs to determine the most popular song in the competition. The Contest has been broadcast every year since its inauguration in 1956 and is one of the longest-running television programs in the world. The production is well known for its technical achievements and its equipment demands are high. For a live broadcast with approximately 125 million viewers, nothing is left to chance.

Cape Cross GmbH is quite familiar with the challenges of the Eurovision production, having supplied all the equipment for the 2011 show in Duesseldorf. In addition to being one of the biggest technical suppliers in Europe, the company also offers pre- and post-production services and full technical support. A major contribution to the 2011 Eurovision production was the popular “postcards” that played between performances. Using innovative techniques to capture reality in miniature version, a kind of playmobil-look through a  “tilt shift“ effect. They devised a completely tapeless workflow dealing with approximately 30 Terabytes of data, spread among 5 servers. For the 2012 production, they delivered an equally high level of professionalism in a completely new arena that had not yet had a show within its walls, making for a challenging situation.

Alongside lighting designer Jerry Appelt, (who was also the lighting designer of Eurovision 2011), the impressive lighting rig nicely complimented the new arena. Approximately 2900 lighting fixtures allowed 42 countries plus an elaborate interval act and opening performance to have a completely unique look during the overall 7-hour broadcasts. 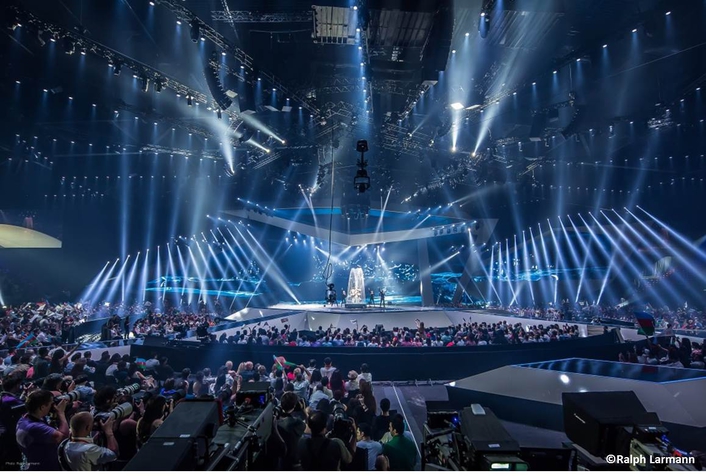 8x grandMA2 full-size consoles, as well as 5x grandMA2 faderwings ran all lighting, triggered via Timecode. 15x MA NPU (Network Processing Unit) devices and 21x MA NSP (Network Signal Processor) handled all traffic in one session on the MA-Net2. Preprogramming was accomplished on a grandMA 3D running on five custom built Cape Cross PCs. In total there were 78 patched universes and 4,310 cues. Thomas Brügge, managing director of Cape Cross said, “MA Lighting is a very strong partner for us. The desks are of unparalleled quality and the support is second to none.”

Some of the more visible lighting effects came from the large number of Clay Paky moving lights positioned all around the stage. The truss behind and above the stage was positioned to compliment the angular stage design, featuring 78x Clay Paky Alpha Wash 1500, 157x Alpha Beam 1500, 249x Alpha Spot HPE 1500, 47x Alpha Profile 1500, and 114x Sharpys. “The Sharpys were everywhere,” said Appelt. In addition, 22x Clay Paky Shotlight Wash were in the ceiling “strictly used for effects.” Furthermore, three concentric rings of a Parasol KLR (Kinetic Light Ring) system with circular motion, equipped with Alpha Beam 1500s, were used over the stage for a dynamic effect.

6x Robert Juliat Aramis 2500W and 4x Robert Juliat Lancelot 4000W shined the spotlight on the performers from three different follow spot positions in the ceiling. In addition, 6x Alpha Beam 1500s were used as follow spots for the back truss. Cape Cross custom modified the fixtures by adding a handle and removing the automated yoke to meet the requirements of follow spot operators. Appelt explained, “These were great for targeting and colour bumping.” Lighting was overseen by Cape Cross Technical Manager Christian Hanno. 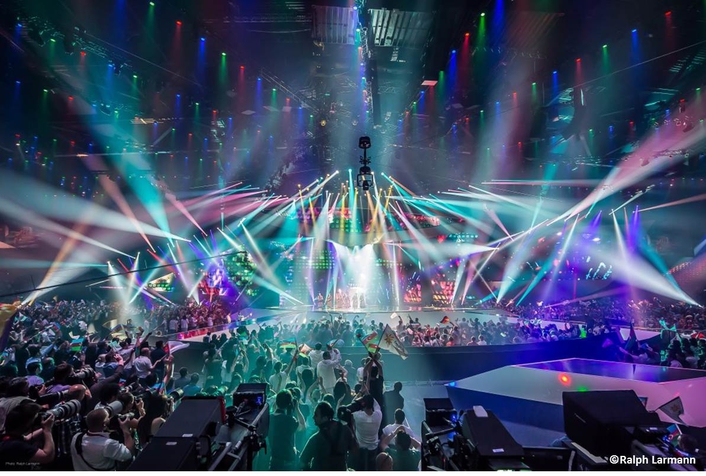 Lighting Designer Jerry Appelt said of Cape Cross Studio + Filmlicht GmbH, “I know when I deal with them, I’ll get the very best equipment and support. There’s no challenge too difficult for these guys and I can always feel assured that the desired result will be exactly what is expected.”

Final results of the competition put Sweden as 2012 champion with the song “Euphoria” by Loreen, putting the show back in Sweden next year for the first time since 2000.

About Cape Cross
For more than ten years Cape Cross has been realising national and international media productions and events in a broad variety of dimensions. Based on a unique turnkey solution, the company is one of the biggest and most successful specialists in Europe, with the ability to cover both sides of production: the conceptual design and rental of professional equipment as well as the production service.