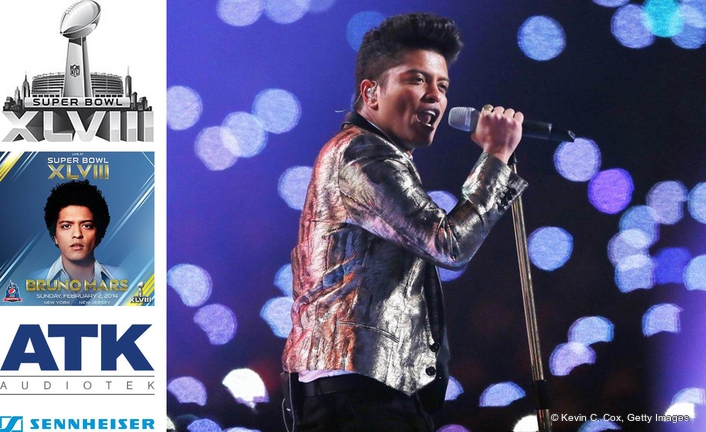 During the 12-minute set, which included his top hits “Locked Out of Heaven,” “Treasure” and “Just the Way You Are,” Bruno Mars showcased his versatility as an entertainer with a dramatic drum-solo introduction, James Brown-inspired dance moves, and an instantly recognizable soulful voice captured by Sennheiser.

Working alongside veteran production provider ATK Audiotek, Bruno Mars’ production team – including monitor engineer James Berry and front-of-house engineer Derek Brener – specified Sennheiser SKM 5200 handheld transmitters and MD 5235 capsules for each of the three vocalists on stage, including Bruno Mars. In addition, all of Bruno Mars’ performers were equipped with Sennheiser 2000 Series wireless monitoring systems. “It was rock solid perfection, just as we expected,” says Berry. “Everything just worked, and we had no problems.”

Preparing for the Big Game
Whether they are touring the world or performing at the Super Bowl, preparation is key for Bruno Mars’ production team. “First, I need to have all my Sennheiser products there, because I know it’s all going to work,” says Berry. “We went in on Monday, checked everything and Bruno came in on Tuesday. Then we ran through rehearsals three or four times a day – everything was easy and we didn’t have any problems.” 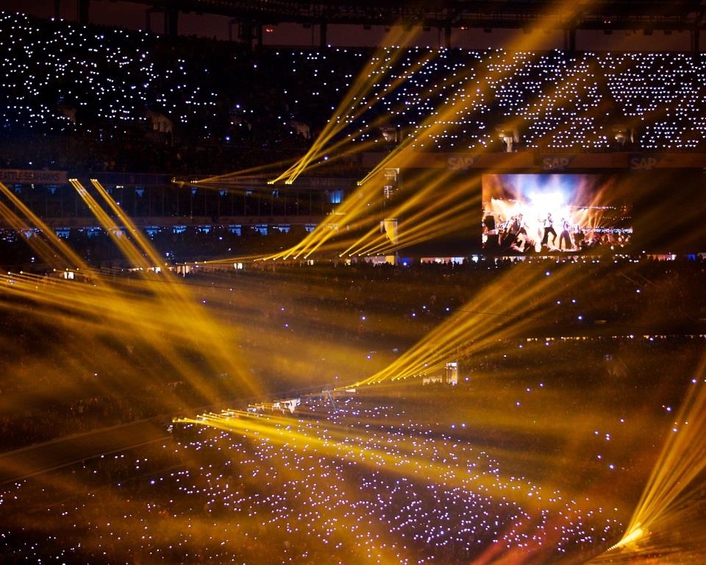 “You’ve got to let go of the pressure in the moment,” adds Brener. “We must have rehearsed upwards of ten times so we knew what we were doing and we knew that it sounded great. Thankfully, with Sennheiser, you don’t have to worry about the ‘What if’ moments, since Sennheiser virtually never fails.” Brener was grateful to have ATK Audiotek by his side as well. “They are so well prepared for the scale of this kind of production – especially on the biggest show of the year.”

Cutting Through the Mix
Wherever Bruno Mars is on stage – including at the Super Bowl – his Sennheiser SKM 5200 transmitter with MD 5235 capsule is always nearby. “It’s very imporant to us that Bruno is on the SKM 5200,” says Berry. Derek Brener explains how the MD 5235 capsule is especially well suited to Bruno Mars’ voice: “There is something special about this capsule,” he says. “It just punches through the PA better than any other mic we’ve tried on Bruno. There is a special quality in the timbre of his voice, and how this aligns with the MD 5235. It’s a great match.”

“I am grateful we are able to use the products that we want on a high-profile broadcast production like this, because on some other TV shows, you are at the mercy of having to use other equipment that is provided,” adds Berry. “We hear the quality of these microphones every day while we’re on tour and it’s always reassuring to know that Bruno’s vocals come across perfectly in a broadcast mix.”

For Brener, the ultimate test of the audio quality is the broadcast mix itself. For this reason, Bruno Mars’ team hand picked legendary record producer/engineer Brendan O’Brien to supervise this. “For a broadcast going out to nearly 120 million people, this was a really smart move,” observes Brener. “He’s already done a Super Bowl with Bruce Springsteen and has produced so many great records – this allowed me to concentrate on delivering a great house mix.”

While Bruno Mars’ halftime performance during Super Bowl XLVIII may have astounded millions of audience members around the world, Berry says that Bruno Mars’ team approached the performance just like any other show. “This show was no different than any of our other stage shows,“ he says. “Bruno puts out the same amount of energy whether he is in a club or whether he is performing for millions of people. We took that same approach as a crew. It is all a matter of making him feel comfortable, and for Bruno to feel comfortable, he needs the right microphone. That’s always a Sennheiser.”

For front-of-house engineer Brener, the Super Bowl performance was a resounding success: “When people would ask me who I was rooting for, I would say ‘Bruno’. And Bruno won!”