.
Musician, music producer and DJ Bonobo finished his marathon ‘North Borders’ world tour with a sublime and superlative mix of classical and electro beats – complete with 18 piece orchestra - at London’s Alexandra Palace, complete with an equally fabulous lightshow designed by  Will Thomas.

This utilized over 100 Robe moving lights … all supplied by Southampton UK based GLS.

The design process for the end-of-tour extravaganza began whilst Will was out in the US lighting Bonobo’s DJ set, and he became struck with the difference that good lighting out in the room could make to the whole vibe of the show by involving the audience. So to make this show particularly memorable, he evolved a plan to pull the audience into the show as much as everyone onstage. 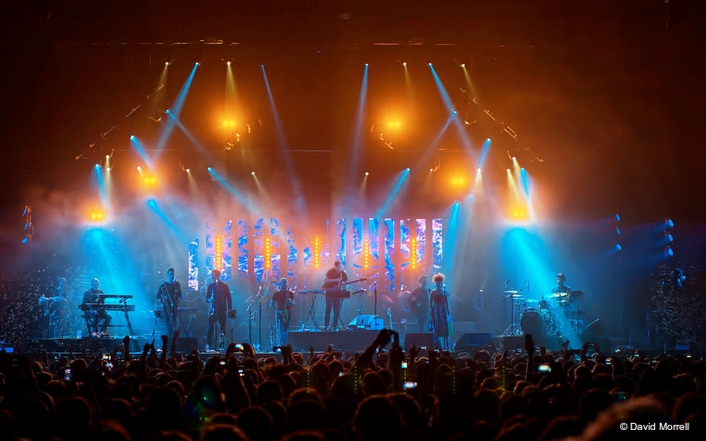 Adding the audience trusses, effectively made the cavernous, stark venue feel more like an intimate and atmospheric club. The space became intimate and personal, and a far more interesting environment for the cameras doing the DVD record to explore.

The LEDWash 300s were used exclusively for side lighting and were rigged vertically in threes  on three Manfrotto stands either side of stage. They were primarily key light for the cameras, but as they were rigged on the stands that blended into the background, they became one unified colour-changing multi-source beam effect … capturing the energy fabulously for the dancier numbers.

The LEDWash 600s were rigged on the audience trusses. “Thanks to the incredible zoom, they provided dynamic blocks of light and a huge backlight wash on the audience, which again looked great on camera,” Will explained.

The 600E Spots and Pointes were positioned more traditionally on the back, mid and front audience trusses. On the stage floor, they were used to front and back light the transparent LED screen upstage of the DJ booth that has been part of the whole tour.

The zoom on the 600E Spot made them perfect for blasts of colour through the screen to remind fans that it was effectively just a piece of temporary stage scenery, rather than a giant TV that they should be staring at all night!

All the moving lights were complimented by a variety of generics – PARs, ACLs, Molefeys … and Source Four profiles on the front truss.

Robe’s Media Spinners were used to rotate six (out of a total of 16) 25 cm wide by 2 metre high video panels. The six rotating elements were built from custom exhibition triangular trusses with a video panel on one side and mirrored surfaces on the other two. 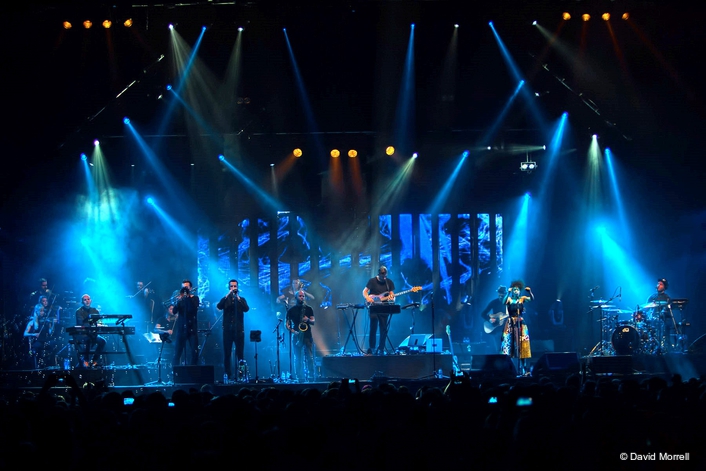 Special ‘bar’ gobos were fitted into the 600E Spots, and Will discovered he could run the second gobo wheel through the bar gobo and onto the mirrors with no loss of light. The zoom on the 600E Spot enabled him to place the units almost at the foot of the spinning mirrors and still light their full 2 metre height … keeping the gobo perfectly in focus.

He had originally used Pointes on the incendiary show at London’s Brixton Academy in December 2013 – one of several highlights of an amazing 180 plus date itinerary - and at the time the biggest headliner that Bonobo had played. For Ally Pally, the 48 Pointes were an important design aspect and were chosen specifically for their multiple effects.

Firstly he used the frost/focus with a reducer gobo to replace any need for coloured PAR cans. “For me, Pointes produce THE best PAR can emulation … with the massive advantages that you don’t need loads of time and crew for rigging and focusing … and they are massively flexible!”

Secondly … the strobe function is “So good” that he didn’t feel the need to add in any standard strobes into the design at all.

Another benefit was the small size and quiet running which meant they could be ensconced amidst the string section without any consternation from the violins and violas!

However, the best thing about Pointes for Will is actually the six-facet linear prism! 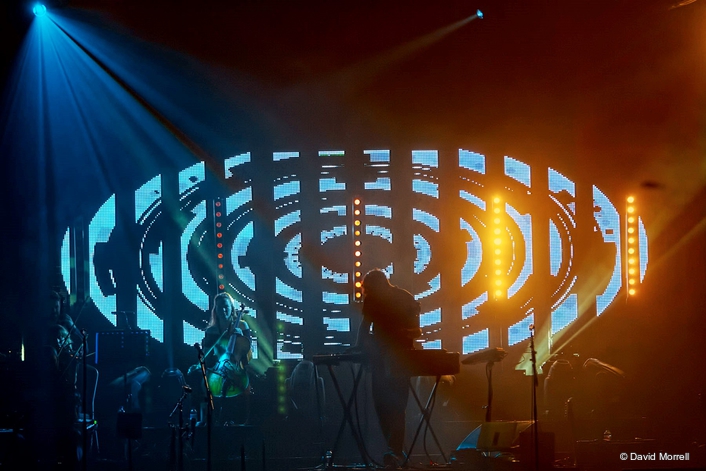 He recalls a moment back at the start of his touring work with Bonobo when they played a club in France with 36 - now obsolete – classic, and very striking static beam effects - which everyone on Bonobo loved! The Pointes are the closest beam effect he has found to the power and impact of these … AND they move.

He received lots of positive feedback after the Ally Pally gig – ranging from comments about how beautiful the ‘spidery’ lights were to quips from the band about the apparent random mathematical precision of the Pointe gobo effects going out into the audience!

A camera mounted on the back truss also enabled him to see the effect from the ‘band’s eye view’ for the first time!

He programmed and ran the lights at Ally Pally on a ChamSys MagicQ 200 console. Will also designed the tour’s video system and produced the content in conjunction with Blasthaus from San Francisco with additional material provided by Strangeloop. He ran video for the live shows using an ArKaos media server. 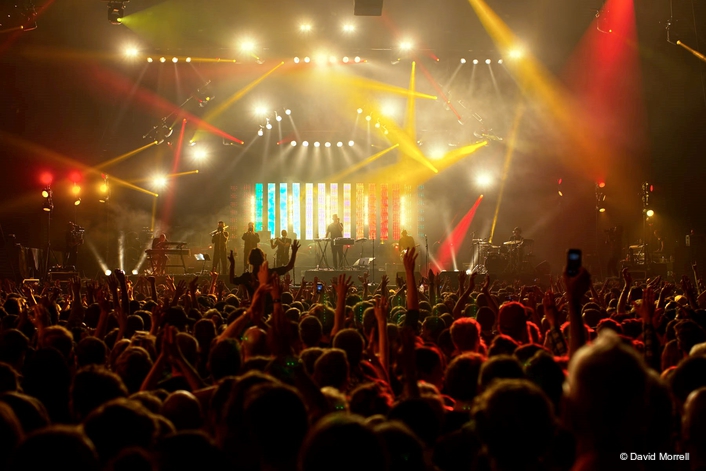 Will has been specifying Robe for his design work for about five years, and over this time has seen the brand become increasingly prominent everywhere, especially for venue in-house installations across Europe and, more recently, the US.

Talking about GLS – a leading UK rental company that has invested consistently in Robe – he states, “They provided the perfect balance of quality kit plus professional and friendly crew, which meant I could fully concentrate on programming the show – leaving the GLS team to deal with all the rigging and tech’ing which they did brilliantly”.