The Eurovision Song Contest is an annual competition, which since 1956 has attracted the best performers from up to 43 countries and is hosted each year by the country that won the previous year. This year it was held in Malmö, Sweden. As much as it is a song contest, it is fair to say that countries also compete to deliver an extravaganza that is even better than previous years. So, it comes down to spectacular design and flawless execution using new technologies and superlative artists, each delivering a unique high-energy act. Culminating in a live-to-air final watched by as many as 200 million viewers, mistakes are not an option, and the logistics of flowing all of this on one stage are staggering. The contest for the production team comes down to how to get the technology to deliver the creative content on target, on time, dependably.

Working in conjunction with Martin Kuhn of Switzerland's Moodbox, CAST deployed BlackTrax for two major performances at the event – the opening act of the semi final, 'Urban Orchestra', and the return to the Eurovision stage of 2012's winner, Loreen. Technical director Ola Melzig was unremitting in his praise of the system's performance, commenting: “Thanks to BlackTrax, we were able to do things that no one has ever done before – it took the show to a new level. With over 1200 lighting fixtures and almost 30 of the largest, brightest video projectors in the world, we clearly don’t make equipment decisions casually. Given the size and complexity of Eurovision you can’t have any mistakes. The precise target information that BlackTrax provided was perfect for the acts it was used on.”

During the performance by Urban Orchestra, BlackTrax was used to track BMX riders and rollerbladers onstage, enabling effects to be projected on the floor at their exact position, without any lag or drift of the effect from the performer. Dancers, meanwhile, performed in line with pre-programmed effects and therefore were required to be in exactly the right position at the right time in order for effects to follow them accurately. At times this proved tricky to pull off, but thanks to BlackTrax, the skaters and riders (with the infrared emitter LEDs of the BTBeacon attached to their helmets) had the freedom to time their stunts as they wished and land wherever they wanted or needed to, without having to worry about cues and positioning. 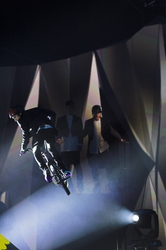 The video programmer/operator initially included the pre-programmed (non-BlackTrax) content, which comprised brightly coloured trails that the BMX riders and inline skaters were supposed to follow. At times when they were too early or in the wrong position, the trails were out of sequence with the performer, at one point lagging behind by about a second, while the trails positioned by BlackTrax were, of course, always on-target and on time. Subsequently, the video programmer chose to remove the pre-programmed paths, leaving only the BlackTrax trails.

BlackTrax was then used during the final of the contest for Loreen who, along with several other aerialist performers, was tracked while 'flying' above the stage. The light tracking sequence for Loreen was designed by Emma Landare (LD for interval acts), who dedicated three lights to each of four flying pairs; 12 lights in total. To do this without BlackTrax would have required either 12 follow spot operators (four of which would need to be positioned on the floor behind the stage) or pre-cueing of moving lights, however, in this case, the unpredictable swaying of the aerialists could not have been compensated for. BlackTrax delivered the best of both worlds – tracked lights that followed each and every random movement, without the inconvenience of using and positioning a large number of follow spots. Lighting designer Fredrik Jönsson said, “BlackTrax provided us with this very cool effect with Loreen where we tracked flying dancers in realtime with floor lights. The only way of doing this without BlackTrax would have been with extra followspots, which we could not have in that position since they would have been seen by the cameras."
Find the Video on YouTube here

Interestingly, CAST was informed by the harness and flying rig operators that some of the aerialists had tried to 'beat' the BlackTrax system by to getting out of the light during the pre-rehearsal testing and, with absolutely no success, thought this was great fun.

With regards to the BT Beacon, one of the performers commented, “I was concerned that the beacon would get in the way of the harness or cause discomfort, but they were very small and none of us even noticed them – they certainly didn’t impede our performance.” 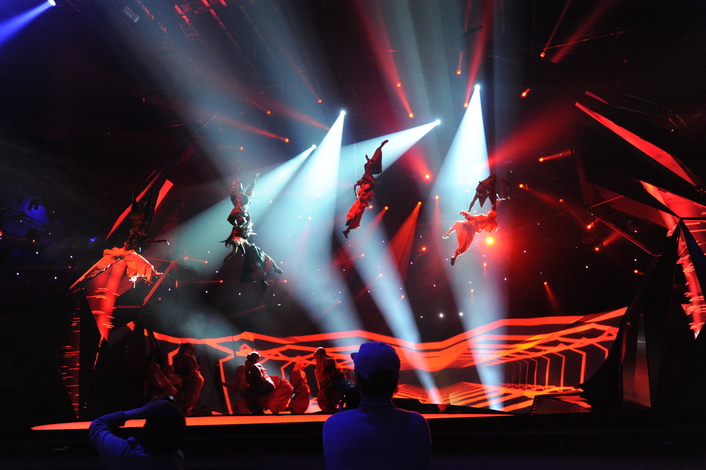 Individual acts aside, the overall performance of BlackTrax in the demanding environment of the Eurovision arena was deemed to have been exceptional. The BlackTrax cameras (BTSensors) were spaced about 215 feet apart from each other and, despite the fact they weren't placed to cover the entire venue, were nonetheless able to track BTBeacons as distant as the tunnels through which the audience members enter. Furthermore, despite more than 70 Wi-Fi devices in the venue used to run wireless DMX control, multiple high-power wireless video camera signals, wireless headsets and in-ear microphones resulting in an enormous level of RF noise, none of this interfered with BlackTrax. 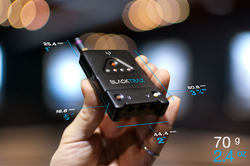 “As the first big test of BlackTrax on this kind of scale, it was very promising,” commented Martin Kuhn, “however this is just the very beginning of what the overall BlackTrax solution can do. The tasks it was given were performed flawlessly, but the way they used it this time did not even scratch the surface of what it can really do. Eurovision opened the BlackTrax box of tricks. They have given us a taste of what is possible. It was a fantastic start and showed the direction in which things can go, but it has so much more potential yet to reveal. In the future it could really change the way shows like Eurovision work, especially in regard to issues such as the number of follow spots lighting designers are able to specify. With BlackTrax the number is not an issue – if you have one position, you have every position.”

What Kuhn is referring to here is BlackTrax's huge value proposition – as well as offering incredible creative possibilities, it also paves the way for world-class levels of production with significantly lower costs, much greater ease and far less resources than anything achievable with preprogrammed automation alone. It represents the ability to take a complex, intricate show, of the kind traditionally reserved for a single venue, on the road. The quality of touring shows can now be as high as that of non-touring, and productions need not incur a huge number of hours spent cueing and rehearsing intricate sequences to perfection. All this points to the fact that BlackTrax very quickly pays for itself.
Find the Video on YouTube here 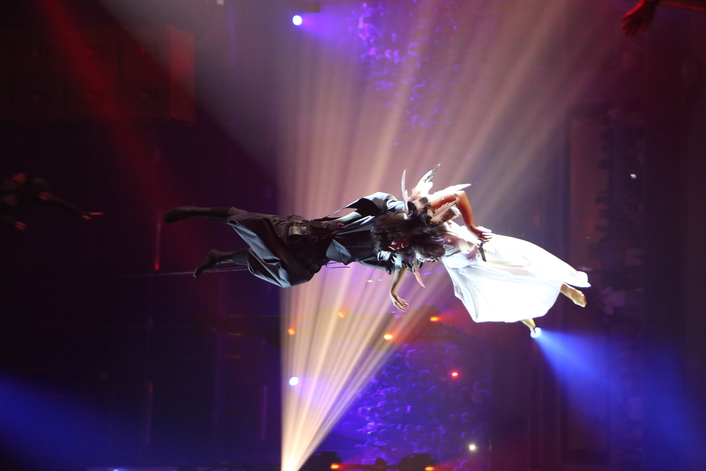 About BlackTrax... BlackTrax is a powerful, accurate, yet affordable tracking technology solution that delivers precise 3D & 6D positioning to controllers for the downstream interfacing automated/robotic technologies used extensively in entertainment production. Using proprietary IR and RF, it delivers dynamic streaming positional data with six degrees of freedom (x, y, z, plus roll, pitch & yaw) to 3D & spatial audio, automated lighting, multi-media servers and robotic cameras, simultaneously and in realtime. Anything tagged with the FCC and CE certified flip-phone-sized BTBeacon, which carries an IR LED, gyroscope, accelerometer, and tiny wireless radio, is tracked at over 100 frames per second by overhead BTSensors, while its orientation is communicated by RF directly to the BTServer. Should the IR line of sight become momentarily obstructed, the BTBeacon’s onboard inertia measurement unit (IMU) provides double-redundant 3D positioning via its tiny radio transmitter.

BlackTrax is offered as a complete 'tracking solution', which means either CAST or a BTExpert will ensure it is properly designed and installed, before providing onsite training and ongoing support. The BTBeacon v1 black cases are available in either plastic or light metal alloy, and the 'stringer', which connects the IR LED with the body pack, comes in various lengths.