When US President-elect Joe Biden delivered his long-awaited victory speech in his home town of Wilmington, Delaware on the evening of Saturday, November 7th, the exuberant celebrations culminated with a spectacular drone and pyrotechnic show from Strictly FX. “The creative on this originated with executive producer Ricky Kirshner, of Kirshner Events, who has been the nexus of all the work we’ve done with the DNC,” notes Ted Maccabee, CEO of Strictly FX.

In partnership with Verge Aero, the leader in advanced drone show technology, Strictly FX deployed a fleet of 200 state-of-the-art drones for the event. As those below celebrated, the GPS-guided drones lit up the sky with precision choreography, synchronized to a soundtrack which began with Coldplay’s A Sky Full of Stars. 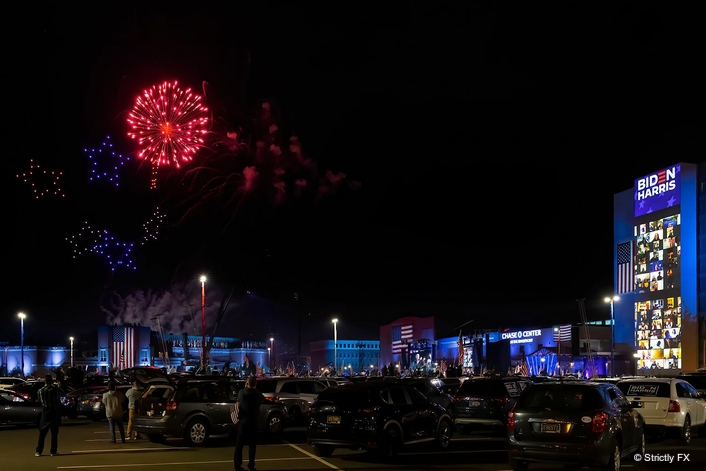 The large-scale aerial imagery, created and refined in line with the Biden campaign’s vision, included red, white and blue stars, Biden’s campaign logo, a map of the USA, ‘46’ and ‘Harris’ – all with Strictly FX’s stunning pyrotechnic accompaniment.

The team worked fast to organize not just the content of the show, but the permissions and logistics required to carry it out. “Since this was a national security situation, the permissions that we had to get from various government entities were incredibly detailed; thankfully, we started on this process three weeks ahead of the election, and we were able to wade through all the authorizations in time to create this once in a lifetime event,” notes Maccabee.

The crew from Verge Aero had challenges as well. Nils Thorjussen, CEO of Verge Aero, adds, “Naturally, there was a vigorous vetting process to satisfy the authorities that the show could be flown safely. However, the flexibility and redundancy built into our system allowed us to meet every security request and scenario that was posed to us.” 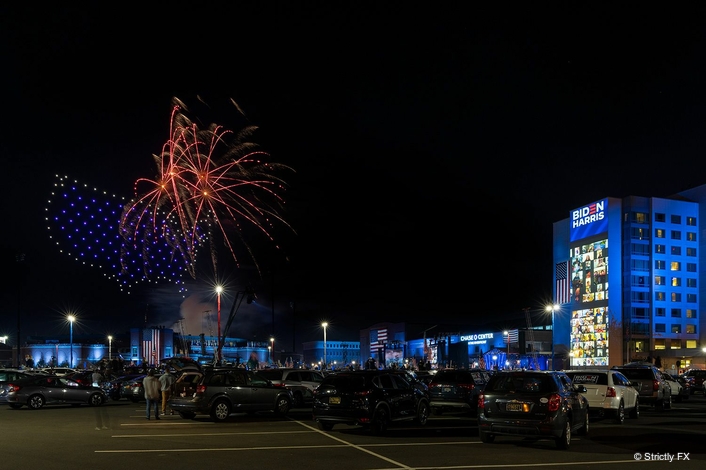 With the election’s result delayed, the team was on standby from Tuesday until Saturday, ready to fly the show at a moment’s notice. Thanks to the system’s rapid deployment capability, this was not a problem. “Our ten-person east coast special effects team didn’t know if we were even going to be doing the event until we got the green light from a member of the Biden Camp on Saturday night,” confides Maccabee. 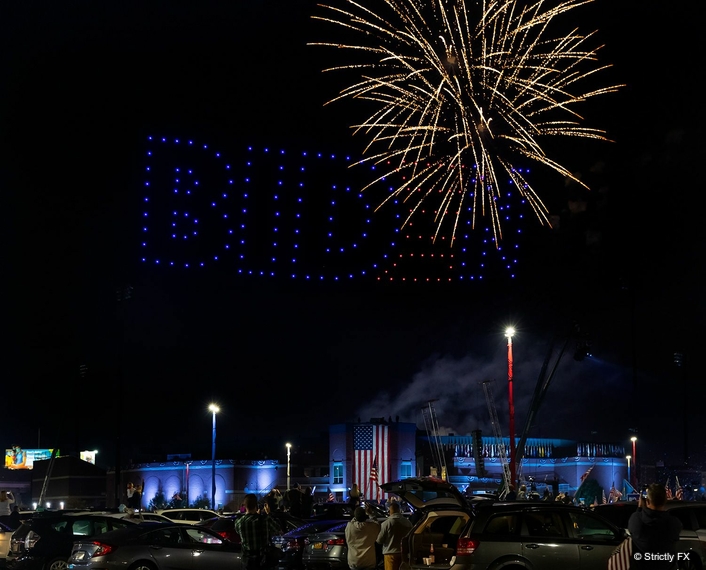 To maintain secrecy and surprise, there was no rehearsal. “The first time we flew the show there was on the night,” says Thorjussen. “This really speaks to the accuracy and robustness of our flight planning software. The client was amazed at the accuracy of our pre-show rendering.”

The resulting show topped off a joyous occasion for those gathered below, including Biden and Vice President-elect Kamala Harris, their families and campaign teams, all of whom clearly enjoyed the spectacle playing out in the sky. “We’ve done numerous presidential campaign events, and this one was especially memorable since we were able to add drones into the mix, thanks to our partnership with the very talented professionals at Verge Aero,” concludes Maccabee.

About Strictly FX
Strictly FX specializes in world-class pyrotechnics, artfully programmed lasers, custom effects and more for live events. The firm was founded in 1996 by industry veterans Mark Grega and Ted Maccabee and developed a sterling reputation for pushing the creative boundaries and exceeding worldwide safety standards. The firm, originally based in Chicago, has now grown to include offices in Nashville—the new HQ—and Los Angeles. The firm is home to a roadworthy team of special effects technicians, in house artists, as well as a detail-oriented office staff that’s knowledgeable about regulations faced by the industry around the globe. 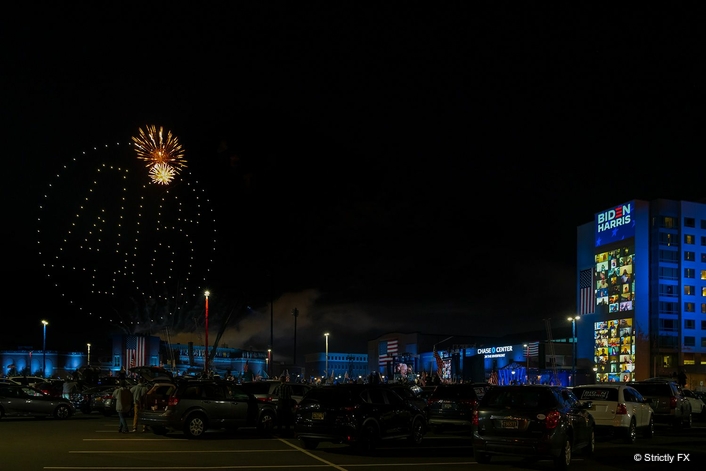 About Verge Aero
Verge Aero empowers creative professionals by making it easy to incorporate sophisticated drone shows into entertainment events. A fully integrated hardware and software platform with sophisticated programming and previsualization tools allows designers to go from creative vision to reality in minutes. Verge Aero is fully approved by the FAA to fly drone shows in the US.