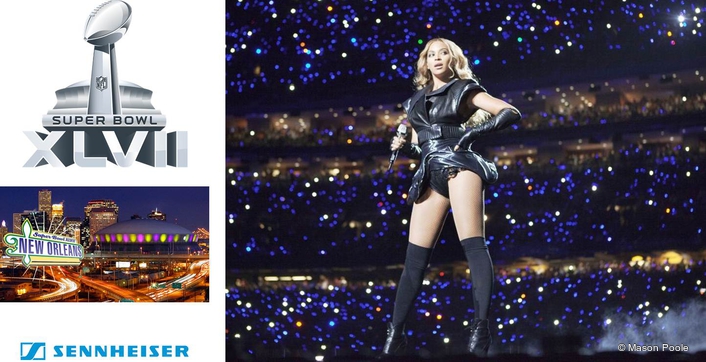 With so many millions of fans resolutely focused on the Pepsi Super Bowl XLVII Halftime Show on February 3, there was absolutely no margin for error. Therefore it should come as no surprise that Beyoncé’s audio crew and the musical segment’s veteran production provider ATK Audiotek chose Sennheiser’s predictably reliable wireless technology and exemplary sound quality. Continuing in the tradition of last year’s record-breaking halftime show by Madonna, who also performed with Sennheiser, Beyoncé’s 12-minutes-plus performance featured a medley of some of her best known tunes and a reunion of Destiny’s Child.

Beyoncé, a 17-time Grammy Award-winner and longtime Sennheiser user, took the stage at halftime with her signature custom chrome-finish Sennheiser SKM 5200-II handheld transmitter, topped with an MD 5235 dynamic capsule. “She’s got such a huge voice,” said Stephen Curtin of Eighth Day Sound Systems, who is also Beyoncé’s front-of-house engineer. “It’s difficult to put her on a lot of other mics as she can pretty easily distort a capsule if she’s really on it. To have the comfort of knowing that’s not going to be a problem, right off the top, is a huge thing for me.”

Beyoncé and her all-female band and dance troupe performed a medley of hits including “Love On Top”, “Crazy In Love”, “End Of Time” and “Baby Boy” before her Destiny’s Child band mates Kelly Rowland and Michelle Williams joined her for tracks including “Bootylicious” and “Independent Woman”. Rowland and Williams also stayed on-stage for Beyoncé’s smash hit “Single Ladies”, leaving her to deliver “Halo” solo for the grand finale. 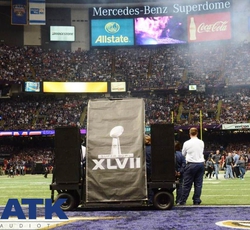 “Nothing beats the quality and the frequency response of the RF compander in the Sennheiser equipment,” observed Jason Kirschnick, Chief Technology Officer, Eighth Day Sound Systems, Beyoncé’s tour production provider. “If you want sound quality, it’s pretty much unmatched when you put it out in the field against other manufacturers.”

Monitor engineer Demetrius Moore sums up the prowess of the microphone’s sonic attributes even more succinctly: “The Sennheiser SKM 5200 is the world’s best sounding live wireless vocal microphone, hands down,” he says.

Prior to kick-off, and using a matte black Sennheiser SKM 5200-II transmitter with an MD 5235 dynamic capsule, Alicia Keys performed the Star Spangled Banner seated at a piano on a stage which was in the shape of the NFL logo. Keys’ voice was shimmering and crystal-clear, and her moving rendition of the national anthem served as the perfect spark to what would become one of the more memorable Super Bowl events in recent history.

Sennheiser’s advanced RF technology is tremendously beneficial during special events such as the Super Bowl, where this year Jason Eskew and the Professional Wireless Systems team coordinated more than 80 audio and comms channels. Stephen Curtin is carrying a total of 12 channels of Sennheiser EM 3732-II wireless receivers on the current leg of Beyoncé’s tour. There are eight channels for SKM 5200-II handhelds, including a main and backup for Beyoncé, three background vocalists and guests, plus four channels for horns. The horn players all use SK 5212-II belt pack transmitters.

“From a technical perspective, RF is a big selling point simply because we can get the 3732 as a wideband product and cover the whole frequency range,” explains Curtin. “That gives us the greatest ease of fitting it in where we can, especially in crowded RF environments. There aren’t a lot of products that can do that; everything else is specific to a certain bandwidth.”

“Sonically, Sennheiser has always been my preference,” he continues. “There’s always a significant difference when you hear someone using another product compared with a Sennheiser.” The off-axis rejection of the Sennheiser vocal mic is another benefit that Curtin appreciates. “Having great directivity and being able to get a significant amount of gain before feedback is a pretty big deal.”