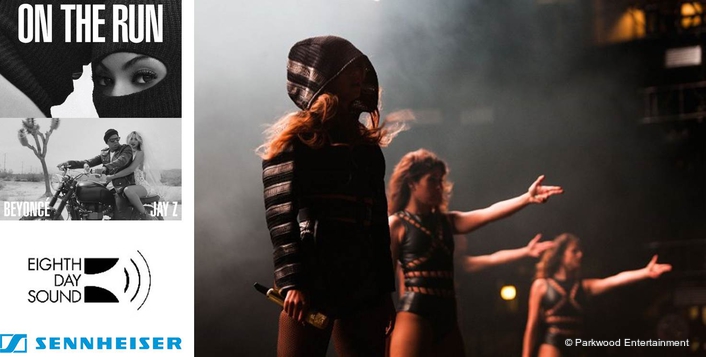 Digital 9000 has delivered uncompromising reliability and performance for the duration of Beyoncé and Jay Z’s ‘On The Run´ tour
Following the recent success of their highly successful solo tours, international superstars Beyoncé and Jay Z have combined their talents to deliver a musically scintillating and immaculately choreographed ‘Bonnie and Clyde’ themed stadium tour, ‘On The Run’. The tour, which recently completed a 20-date North American leg before heading off to Europe earlier this month, explores the vast and dynamic repertoire of the duo while highlighting their creative synergies, flawless fashion sensibilities and unique on-stage chemistry.

For the duration of the tour, Beyoncé and Jay Z have relied on Sennheiser’s Digital 9000 wireless microphone system, which was purchased specifically for the tour by Eighth Day Sound Systems, Inc. at the recommendation of front-of-house engineer Stephen Curtin and monitor engineer James Berry – both veterans of the tour.

The tour amalgamates band members from both the Beyoncé and Jay Z touring camps and features two stages, a massive video wall and an elaborate lighting design – making it a sufficiently challenging environment from an RF perspective. Sonically, Beyoncé‘s sheer vocal prowess combined with Jay Z’s unique rapping tones creates an equally daunting set of challenges for the audio staff. Following extensive testing and evaluation by both Curtin, Berry and Eighth Day Sound, the Sennheiser Digital 9000 was chosen and has since delivered uncompromising reliability and performance.

“We are on tour with two of the biggest artists in the world,” Berry observes. “They bring it all night after night and are constantly setting the creative bar for other artists. This can be challenging for us as engineers, so we have to remain at the edge of technology to stay ahead. The Sennheiser Digital 9000 system was a perfect solution from both a sonic and reliability standpoint.“

“For us, it had all come down to audio quality,” he adds. “We did A/B tests between the Digital 9000 and our previous system before it ever saw an artist. When the artists came in for rehearsal, I handed them a Digital 9000 and we never looked back.” 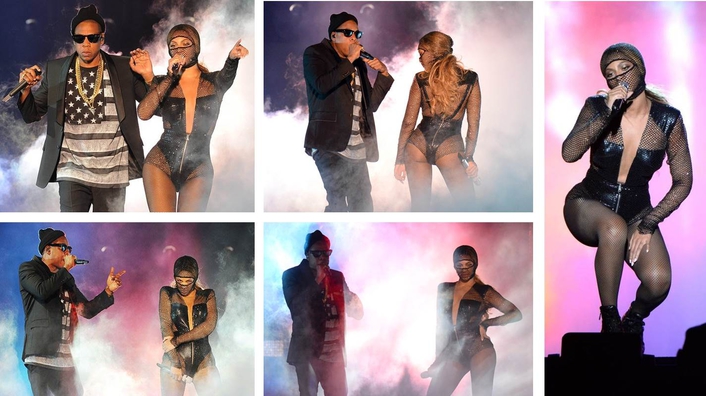 Digital 9000: Wireless Audio for the Big Time
“My first impressions of the Digital 9000 was during the rehearsals with Beyoncé –as soon as she sang, we instantly knew that it was going to work,” explains Stephen Curtin. “Normally, I have to do a lot of balancing and EQing for the environment I am working in, but with the Digital 9000, the pure, natural tone came ringing through – nothing was getting lost in the transmission and I hardly had to make any corrections.” At monitors, James Berry had a similarly revealing sonic experience on Jay Z’s vocals: “The lack of compression made everything sound so smooth,” he says. “I will never use another microphone on a rapper or on another hip hop gig.”

All of this was convincing enough for Jason Kirschnick, chief technology officer of Eighth Day Sound. “If we are making it easier for the engineers to do their jobs and increasing the quality of the audio, then it is a good decision for everyone,” he said. “The Digital 9000 sounds remarkable and is very ergonomic. When you put it in context with all the other products Sennheiser makes, such as the SKM 5200 handheld microphones and the EM 3732-II wireless systems, there is a great track record there. We have a great relationship with Sennheiser, so the decision was that much easier.”

Sonic Performance Fit for a King or Queen
Jimmy Corbin, monitor engineer for the band, says it is very seldom that a single piece of gear can have such a big impact on the overall quality of a massive touring system – but that this is precisely what happened with the Digital 9000: “We noticed there was a significant difference in what you could do with it,” he explains. “With many other microphones, you have to be ‘defensive’ from an EQ perspective, counteracting the problems that routinely arise. But with the Digital 9000 and the MD 9235 dynamic cardioid capsule which has outstanding rejection qualities, you could actually be more creative and ‘offensive’ in how you EQ. When I first heard this microphone, I knew it was going to make my day easier.” 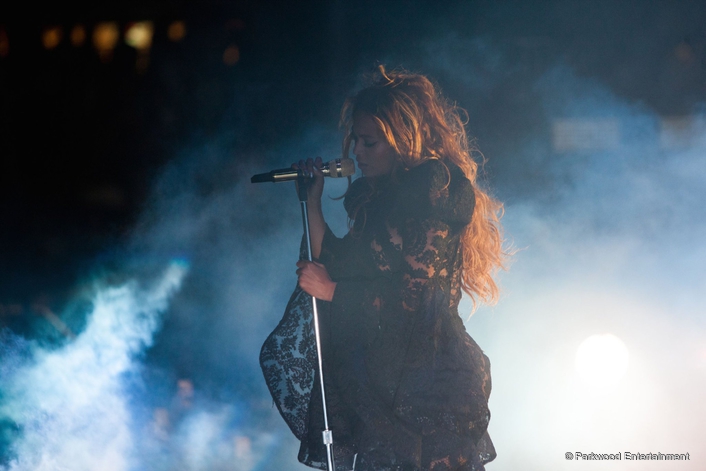 Beyoncé on stage with the Sennheiser SKM 9000 hand-held transmitter

For Curtin, the ‘secret sauce’ of the Digital 9000’s sound is how the RF is transmitted: Since the handheld and bodypack transmits digitally, it does not employ any companding circuitry or pre-emphasis/de-emphasis found on typical analog systems. “Without the companding, I can immediately realize a fuller and more dynamic sound,” he says. “For a vocalist like Beyoncé, this is a big help because it means I don’t have to search for frequencies that were lost during transmission – they are all there.”

As RF technician for the ‘On The Run’ tour, Clinton Reynolds faces a different set of issues: “For me, the RF landscape changes with every city and every venue. We are constantly working around digital television and other challenges and the RF challenges are getting harder, not easier.” He says the scan feature on the Digital 9000 has helped simplify the frequency coordination process. “It actually takes what my antennas are seeing at any given moment and shows me the lowest noise floor for that particular bandwidth,” Reynolds says. “I can always use other scanners for finding frequencies, but none of them show me what the antennas are seeing like the Digital 9000. This is very useful often critical because an antenna might be in close proximity to a lighting rig and be prone to more noise. A traditional scanner won‘t show you this.“ 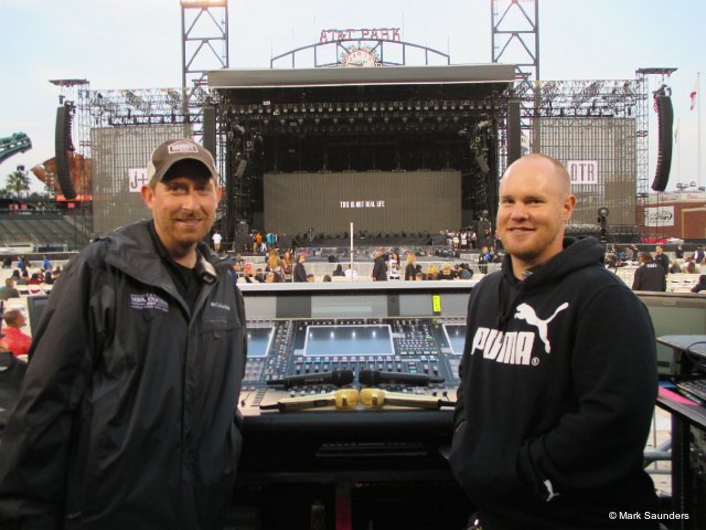 It is reassuring to all concerned that Sennheiser has been there every step of the way on such an extremely high-profile tour – both with products and support: “Sennheiser has always been there to support us and has been very responsive to whatever we might need – both from a product and application perspective,” said Jason Kirschnick.

The Sennheiser Group based in Wedemark near Hanover, Germany, was founded in 1945 and has gone on to become a leading manufacturer of microphones, headphones and wireless transmission systems. Sales in 2013 totalled 590.4 million euros. Sennheiser employs more than 2,500 staff worldwide and operates plants in Germany, Ireland and the USA. The company has a worldwide network of subsidiaries in France, Great Britain, Belgium, the Netherlands, Switzerland and Liechtenstein, Germany, Denmark (Nordic), Russia, Hong Kong, India, Singapore, Japan, China, Australia and New Zealand, Canada, Mexico, and the USA. It also has long-established trading partners in other countries. Georg Neumann GmbH, Berlin, a maker of studio microphones and monitor speakers, and Sennheiser Communications A/S, a joint venture making headsets for PCs, offices and call centres, are also part of the Sennheiser Group.