The Bet is on!

Central to the equipment used in Offenburg was a 64-fader mc²56 (including 16-fader extenders), featuring 240 DSP channels and four DALLIS stageboxes. Equipped with an mc²66, ZDF’s on-site OB van also uses Lawo hardware, and connecting the OB’s mc²66 console to the mc²56, made it possible to perform further broadcast operations, such as inserting jingles. ABS also provided the fibre-optic wiring for the hall’s sound reinforcement system at the show under the supervision of Matthias Paha.

Sound Reinforcement with the mc²56
ZDF has been using several mc² series consoles in its OB-vans for some time, however it was the first time that a Lawo console has been deployed for a live sound reinforcement and monitoring mix for a grand show. The additional possibilities gained through the mc²56 required the ZDF team to rethink the sound reinforcement concept that they have devised over a number of years.

The technical requirements for big TV shows like “Wetten, dass ...?” have also increased significantly in the recent years. Among the changes, the number of microphones in use has sky-rocketed. Moreover, the size of the set has made it increasingly necessary to stage the show in convention centres and multifunction halls, resulting in a work environment that is particularly challenging in terms of acoustics. In addition, the ambient noise level in these venues is relatively high due to the use of studio lights and their cooling fans, as well as other devices. Nevertheless, the broadcast feed has to remain clean and unaffected – this is particularly important and challenging for those parts of the show that involve bets that rely on careful listening. 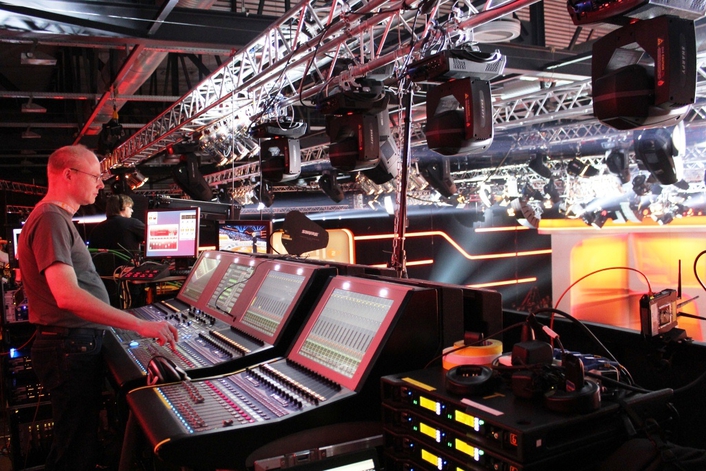 Equally challenging is the monitor mix for the different stage areas. Without this complex aspect of the sound reinforcement, a relaxed conversation, for example between the moderator, bet sponsors, bet candidates, remote units and interpreters, would be impossible.

The sound reinforcement area is subdivided into clearly defined zones. A variety of speaker types is used to serve them, with the specifics depending on individual hall requirements. Among recent developments made to the show presentation is a movable landing that has integrated loudspeakers with wireless control, and also configured for the different zones. For WLAN connection, all components are monitored and can be reconfigured during the broadcast if it is deemed necessary.

The routing possibilities offered by the Lawo consoles, the clear overview – even with the most complex setups – and configuration possibilities all benefit the FOH/Monitor console sound engineers. Using the HD-Core and the DALLIS-I/O frames, the console can even be adapted to the task at hand according to individual preferences.

Audio Broadcast Services GmbH
Audio Broadcast Services GmbH (ABS), based in Rastatt/Germany, is amongst the leading rental companies in the audio business. As an internationally renowned rental partner, ABS hires audio systems and provides services for all types of broadcast, production and live applications.
Featuring prominently among our services are audio systems based on Lawo equipment. A high standard of system-based expertise, due to our extensive cooperation with Lawo, guarantees a comprehensive service, from initial consultation right through to completion of the project.
Where required, ABS can also handle the entire logistics, system configuration and support. We provide skilled teams with international experience, who are available for any situation.