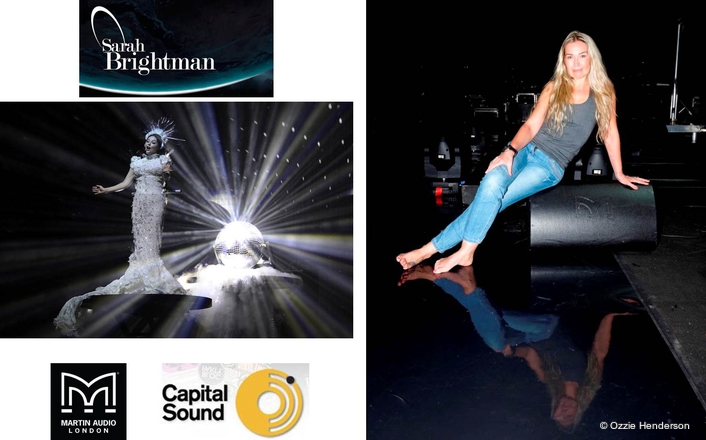 Becky Pell and Martin Audio LE1500
When experienced monitor engineer Becky Pell was asked to join Sarah Brightman on her world tour, she decided to take a creative approach to designing her stage rig. Via Capital Sound Hire she sourced an inventory of Martin Audio’s sleek LE1500 wedge monitors and W8LM Mini Line Array elements for side fills — emulating the set-up she had first seen Rod Matheson deploy, when she was teching for him on Kylie Minogue’s 2008 tour. “He decided to deploy the LMs in an unusual way and it worked really well,” she said.

The rationale once gain was simple. With Sarah and her four-piece band on in-ears, and with most of the inputs DI’d, she wanted to create an enveloping stage ‘feel’ in unobtrusive fashion, to preserve the overall look of the show.

“Sarah had previously used flown sidefills, but I’ve never been a fan of them for several reasons,” says Pell. “Firstly you need to fly them pretty high in order to maintain sightlines and therefore need to drive them harder — this adds to the general noise level and creates more stage coverage than is necessary. On top of that they can be a damn nuisance to rig.

“But my main reason this time was knowing that we couldn’t carry them worldwide because of the extra weight, whereas sourcing them locally really messes with consistency. It’s vital for monitors that the artiste gets what they’re used to every day and it is my job to minimise any disruption, so that they can forget about sound and get on with giving their best performance.”

The four W8LMs came to the rescue. “They are small and yet offer a surprising amount of headroom – you get a lot of bang for your buck!” says the monitor engineer. So my solution was to have two pairs of LE1500s, one upstage and one centre stage at Sarah’s main performance areas, and then the LMs on a stereo mix sitting across the downstage edge, tilted up in a somewhat low-tech fashion with some black blocks of wood!

“Their wide dispersion means that I get a nice ‘wash’ and create a real stage vibe — but angled towards Sarah’s centre position so as not to bug the band. All in all they give me a great deal of control and consistency in creating Sarah’s onstage environment.” Within this environment she is also joined by two dancers and guest tenor Erkan Aki (on two songs).

Becky Pell adds that she has also used the same idea on Anastacia’s shows, stating “it’s brilliant in this kind of application.”

However, it was only after Anastacia had been diagnosed with breast cancer for the second time, causing the postponement of her tour, that Becky became free to join the Sarah Brightman tour. “I hadn't worked with her before but I had worked with her tour manager Debbie Bray on A-ha, while the production manager Kenny Underwood I had known from way back. And when Kenny contacted Martin Connolly at Capital, saying that he was looking for a monitor engineer, Martin told him that I was available.” 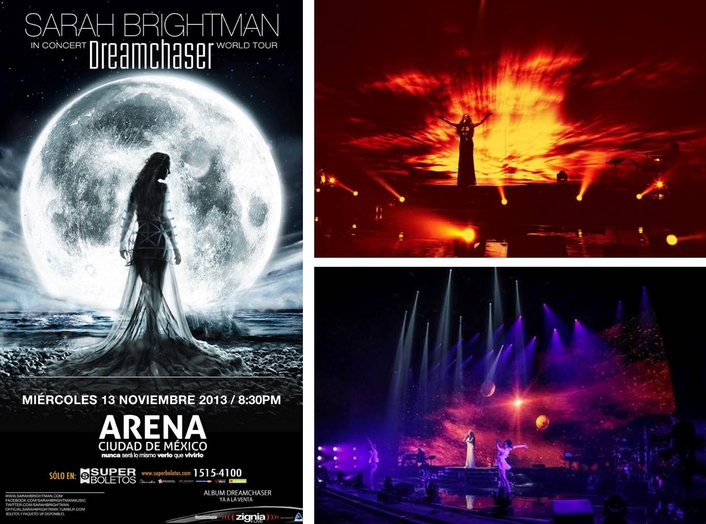 Pell says she has been a staunch user of Martin Audio monitor solutions for many years. “And I keep coming back for more. “In fact I’ve been a Martin Audio fan since first hearing LE700s a long time ago (and I still believe they are a great wedge)!

“The thing for me is that Martin Audio wedges generally need very little doing to them – they sound great straight out of the case. I literally put one or two tiny notches in the EQ and I’m good to go.”

Mixing on a DiGiCo SD10, she says, “Although I’m not driving anything very hard on this gig, the LM’s have lots of headroom for more rock-oriented use, tight punchy low-end and great definition in the highs.

“They’re very natural sounding too which, for this kind of show, is important. The classical/pop crossover nature of Sarah’s material means that sometimes it’s got to rock, sometimes we’re in Nessun Dorma territory. The Martin Audio system handles the spectrum with ease.”

And so the monitor engineer is clearly happy, but what about the artiste? “It was a gamble using this set-up with an artiste who was used to flown fills,” admits Becky. “In fact I had Capital on standby with additional speakers and rigging just in case. I was confident that Sarah would like it … happily she was willing to experiment and has been pleased with the results.”

And a final word on the monitor rig? “It really comes back to one thing — how do the speakers sound? And the answer for me has always been ‘great’!”