K System also deployed at Knotfest and on current Slipknot tour
British breakout band Bastille burst onto the American scene less than a year ago, and has grown from a band with one hit single to a certified concert headliner due largely to its electrifying live shows. The Virgin Records-signed group began its first headlining North American tour this spring, and Thunder Audio Inc. has been an integral part of the production since before it even touched down on US soil.

The band’s production team met with Thunder Audio pre-tour to discuss the unique challenges that they’d face in bringing the exact same show to Bastille fans every night, despite tight load in- and out- times and an incredibly varied list of venues – from sports arenas to intimate theaters – with the resulting mix of gear rigging restrictions and sonic differences. As a result, the touring sound company specified a portion of its newly acquired L-ACOUSTICS K1 complement – including 24 K1 and 30 KARA enclosures, plus a dozen SB28 subs – which has already proven to meet and exceed the band’s and fans’ expectations. 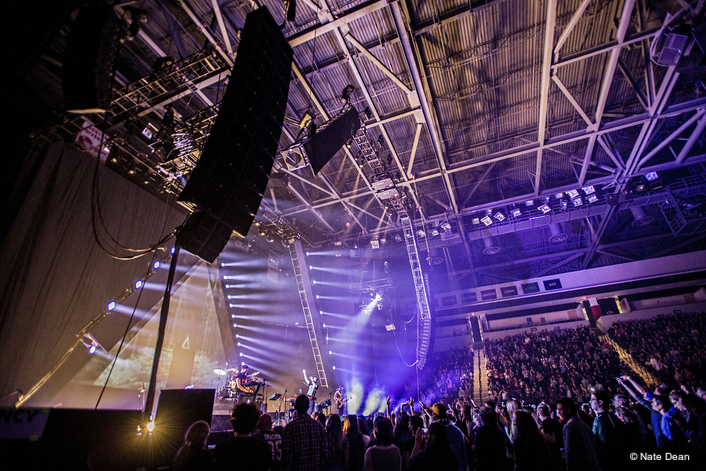 FOH Engineer Paul Cooper has been with Bastille for over two years. When the band began planning its North American tour, the Bastille crew immediately contacted Thunder Audio. “As soon as the band was at the point where we were ready to start carrying our own gear, we called Thunder,” says Cooper. “They were strongly recommended by our gear contacts in the UK, and as soon as we met with them we knew we’d all get on well.” 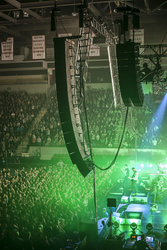 Jonny Winkler is Bastille’s systems engineer. He says the essential element that makes Thunder Audio the ideal touring partner is a commitment by company principals Tony Villarreal and Paul Owen to always reach for the next level of technology. “Paul and Tony are audio engineers themselves, and that’s so key for us,” he says. “They are completely committed to keeping up with the constantly changing technology, and the L-ACOUSTICS K System is a great example of the best technology available to live sound engineers right now.” Winkler notes that the system is the “easiest to load in and out ever,” and that the consistent results that it delivers not only makes his job easier, but helps him to build a rapport and level of trust with the FOH engineers by allowing him to deliver the same quality night after night.

But the K System is hardly a one-trick pony, evidenced by the fact that Thunder Audio has the remainder of its inventory out on Slipknot’s current tour, which falls on the heels of San Bernardino’s recent Knotfest, also featuring Danzig, Anthrax, Five Finger Death Punch and many other hard rock and metal heavyweights.

According to Thunder’s Audio Paul Owen, “Slipknot’s touring system is identical to the one we just deployed for Knotfest, which utilized 24 K1 and 24 K2 enclosures plus 16 K1-SB and 28 SB28 subs. The amazing thing is that we didn’t have to add to the touring system for Knotfest; the same setup that is currently touring arenas around North America is the very one we used for an outdoor festival attended by 30,000 people, and it never broke a sweat! The K System is such a versatile rig – further proved by the fact that we now have our entire inventory simultaneously touring on two completely disparate acts: Bastille and Slipknot. It’s a magic box, mate!”

About Thunder Audio:
Headquartered in the Detroit suburb of Livonia, with a new office and rehearsal space in Nashville, Thunder Audio has grown over the past three and a half decades into one of the world’s top touring sound reinforcement companies.